What are some of the best English names Chinese people give themselves but are not generally found outside China?

Chlorophyll Wong will always have a special place in my heart.

As a typical wastrel waijiao I’ve had more than my fair share of strange or unusual student names over the years. Here’s a sampling:

Cherry
Cylinder (we tried to get her to change her name to Selina for months)
Oliver (a girl)
Dragon (well, it is China …)
Tiger
Elephant (his name contains a Xiang and his friends call him Da Xiang, so …)
Echo (usually named for San Mao)
Ensoul
Effie (a real English name but very uncommon)
Fender (like the guitar)
Sarin (like the poison gas …)
Laphia (her name is self-made pormanteau of Laura and Sophia)
Panzer II (a military nut, note the Roman numeral)
Goose (she wasn’t a Top Gun fan, sadly)
Robo
Una
Novia (she didn’t know it means “girlfriend” in Spanish; she thought it sounded like Nokia)
Pussy (um … like the cat, she explained …)
Michael Schumacher (yes, first and last name)
Peter Jackson (this was right after LOTR hit China)

Also, in keeping with the first and last name phenomenon, my local Starbucks has a guy named Michael Scofield.

Wacky names aside, Chinese are far more likely than Americans to choose a name that is archaic or old-fashioned, or to use “mature”-sounding names instead of ”youthful”-sounding names for young people (e.g. Dorothy instead of Dottie, Matthew instead of Matt). They’re also particularly fond of choosing names from books by the Bronte sisters or Jane Austen. (My Canadian friend Darcy was ridiculously popular based on his name alone.)

Another local Starbucks has a “Demon” working there, and two of my newer students are named “Children” because she said it sounds like her Chinese name and “Chark” because, erm, he enjoys clearing his throat. 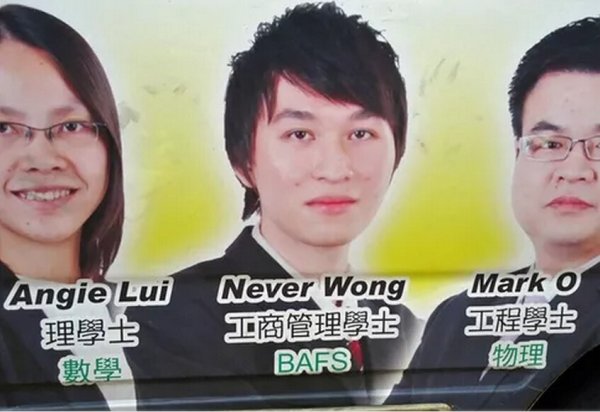 I have a friend named River. He says that he’ll marry an Ocean and name their kid Delta

I’ve come across quite a few but the one that sticks out to me was a girl named “Creamy”. I even double-checked if she meant “Dreamy” at least but no, it was “Creamy”. I didn’t have the heart to elaborate on the possible connotations associated with such a name.

My favourites were:
A 45 year old male student with very bad teeth who thought “Cupid Cue” would be perfect for him.
A female student called “Surprise!” was always fun at roll-call.
The all time best however was when I got to attend a meeting in Beijing where one exec had to excuse himself after he got a bad case of the giggles having been handed the business card of “Black Dong” (family name Dong)

A student in a friend’s class was named HarryPotter. One word. His fullname was HarryPotter Wang.

I’ve met:
- Carrier
- Thinkey
- Stone
- Pork
- Magic
- Jazz
And the most special of all:
- Hodor Zhang (his former name was Ben, but Game of Thrones changed his life)

I’ve also had:
Lucifer
Empire. (That one was epic)
Samurai. (Also epic.)
Kobe, Michael Jackson, Michael Jordan. (They wanted to be called by their FULL names, those last two.)
Any number of “Sunnys”, “Candys”, and about 20 “Cherrys”.
Dollar.
Bing bing. (“My name means ice!”)
Zaki. I like it.
Sweety.
Smile. (A coworker, an English teacher at that.)
Happy. (A boy)

I’ve heard of / seen:
Twenty six
Obama
Hamburger
I don’t know. (His full name. He thought it was a riot to answer that in roll.)

How Much Money Do You Need to Save Each Day to Become a Millionaire?
Jimi Hendrix Was a Paratrooper
22 Confusing-As-Hell Photos That Will Make You Squint At Your Screen
What Events Happened on November 19 in History?