If water is contained in an unbreakable container with no room to expand, would it freeze at freezing temperatures?

If water is contained in an unbreakable container with no room to expand, would it freeze at freezing temperatures?
In other words, can one prevent water from freezing simply by not allowing it to expand? Has it been done?

Oh, it’s been done. Depending on just how strong the walls are, it will stay liquid before finally bursting them. If it truly is unbreakable (a physical impossibility, but one we can approximate), it will turn into an exotic form of ice.

The options are represented by this graph: 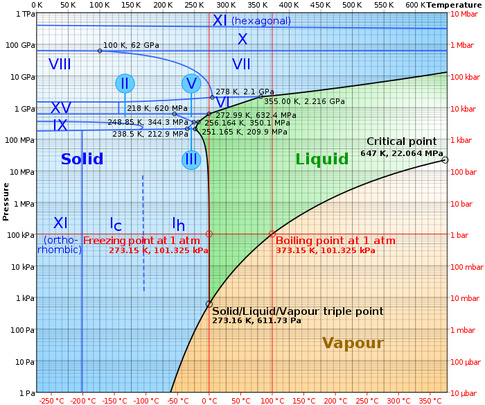 The horizontal axis is temperature; the vertical one is pressure. The red line in the center is 0C, the freezing point. At 100 kPa, or 1 bar, aka standard room pressure, it’ll go into the Solid range anywhere to the left of 0C. That will cause the water to expand.

However, if the walls of the container won’t allow that, then instead of expanding, the pressure will go up. At that point, it becomes a fight between the walls of the container and the formation of the ice. Pressure will keep going up, all the way up to 10,000 times standard pressure. If your box can’t hold that (and practically nothing big enough to be visible can), the box will fall apart and the water will expand.

If your box is strong enough to hold onto that, though, the water will be forced to crystallize. It won’t take on the standard hexagonal shape of an ice crystal, but will instead be forced into a pyramid shape called “Ice VI”. The hexagonal shape has a lot of space in it, which is why ice is less dense than water. Ice VI, however, is denser than water, and it will contract rather than expand. The pressure on the box will remain at that level, and won’t go up any further.

Depending on how you design the experiment (whether you’re lowering the temperature or raising the pressure while keeping temperature constant), you can end up with a number of other exotic forms of ice.

But you’re not going to encounter any of them outside of a laboratory. You can keep water superchilled (liquid below 0) with a strong container for a while, but sooner or later it’s going to burst.

What is the History of Currency Knives?
Alcohol Kills One Person Every 10 Seconds
How Big Could a World Record Pumpkin Get?
People Reveal The Countries They’d NEVER Visit Again