Why Do We Have To Die?

I think no-one would deny the fact that it would be very hard for nature or humans to completely prevent what we (incorrectly) call unnatural deaths.

The reason is simple: it is impossible to make our bodies completely impervious to external destruction from say, a car accident, an infectious disease[1] or even from being eaten by a predator.

So the real question is: why do we die from internal degeneration? Why can’t our bodies just not age, not get cancer, not get autoimmune diseases? Why would we have to die for “natural causes”?

Very seldom in the history of the world have animals, especially humans, died of old age. In fact, this was still way the exception as late as the 19th century: 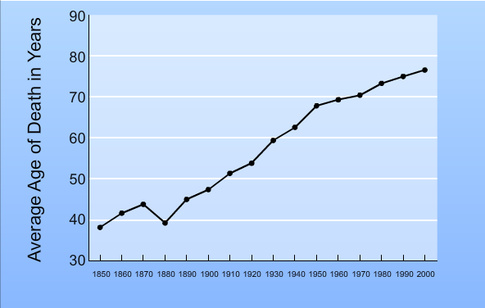 Notice anything? The life expectancy of humans throughout history has almost always been lower than the age of menopause in women. This is absolutely not a coincidence: since it was almost certain that you would die before you are 60, why spend energy making a body that will last significantly longer than that?

You see, some things the body does are extremely expensive. Menopause, again, is a good example of that: all the egg cells women have are already in their ovaries at birth. Because they contain a lot of nutrients and because they are created so early, they are expensive and it is important that the body not create too many of them. The same logic applies to other, more critical functions of the body. When these functions exceed their maximum lifespan, the individual dies.

This wasn’t a problem until very recently when humans started routinely achieving the age at which those critical functions just stopped working.

There is another issue too: Cyndi Perlman Fink mentioned overpopulation as a possible factor, but this is not sufficient. First of all, humans have rarely been in situations where overpopulation was an issue until recently. Second of all, the problem of overpopulation is essentially a Tragedy of the commons, which actually means that even if it was a problem, nature would still continue down that path because it’s the most rational thing to do.

Most importantly, there is a very simple way for evolution to account for overpopulation if people don’t die: simply reduce the amount of children they have. In fact, this phenomenon seems to occur naturally in human populations: as mortality decreases, natality does the same:

Here’s the problem with reducing natality though: an important part of the survival of a species is its capacity to adapt to change, which means that the individuals themselves must be capable of changing.

The problem with multicellular organisms is that they are really hard to change, because change in nature occurs at the cellular level. Sexual reproduction is a great way to both temporarily go back to a single-cell state, where change is much easier, and to introduce extra randomization through the combination of genes from two organisms and through processes such as Chromosomal crossover.

Besides, since change is generally random in nature, it is also pretty risky, which is why it is less costly for it to operate through reproduction than at the level of a grown individual.

You could even go as far as to say that the fact that we die of old age today is precisely due to our new-found ability to efficiently operate non-random changes at the individual level, such as, say, resistance to smallpox, or extra protection from predators through man-made armament.

Other answers, especially the two most popular by Cyndi Perlman Fink and by Murat Morrison, have given philosophical reasons that I think do not answer the question in terms of scientific facts, or somehow assume a beneficent intelligence[3] that has chosen death as a positive thing in human life. These I think, are rationalizations, and in fact I think Murat’s answer does not make that much sense, since it seems pretty hard for me to believe that anyone would suggest that “death by destruction” is in question here, and I believe that this is what he is talking about.

What I don’t like about rationalizations is that they assume we somehow have a choice and that death is, at least at one point, the best one. I don’t know about you, but I’d choose eternal youth over aging and dying any day, and I hope I’ve made a convincing case that aging and death are in fact two sides of the same coin.