How Big Could a World Record Pumpkin Get?

Thanks to the efforts of Illinois farmer Gene McMullen, the North American record for the heaviest pumpkin now sits at 2,145 pounds. McMullen’s Cucurbita Maxima Brobdingnag is the second greatest pumpkin the world has ever known, trailing only Beni Meier of Switzerland’s monster fruit, which tipped the scales at 2,378 pounds in 2014.

The most remarkable thing about these overachieving gourds is that their size is not singular: The weight of the massive pumpkin growth has been linear over the past few decades according to an analysis by University of Wisconsin-Madison horticulturalists. So, when does it hit critical mass?

How high peak pumpkin can go is unclear. Purdue University botanist Dan Egel flatly refused to speculate on a theoretical upper bound for a pumpkin, invoking the parable of the 4-minute mile barrier: It couldn’t be broken, until Roger Bannister ran 3:59.4 in 1954. “It’s going up and up and up,” says James Nienhuis, the UW-Madison horticulture professor who tasked a student with tracking the historical pumpkin weights. “I am astounded at how large they can get.”

Danny Dill was willing to get more specific. “Growers will continue breeding for thickness, thus weight,” Dill tells Inverse. “Something that grew to the size, say 2,500 pounds, could someday weigh 3,000 pounds because it was so thick and dense.” Dill knows a thing or two about giant squash. His father, Howard Dill, bred the legendary Atlantic Giant variety, scoring an intellectual property protection — the closest thing to a patent the United States Department of Agriculture can award. 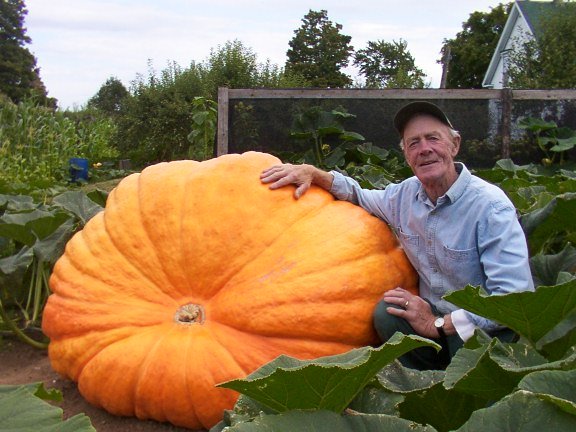 Even If there’s a limit to girth, density can lead to weight, according to Dill. “For instance we a harvesting a small grey squash variety today that are pretty well solid right through to the cavity,” he says. “It’s only a novelty type but they weigh twice as heavy as they look, so imagine if one of these giant pumpkins were solid almost all the way through to the cavity?” Solid pumpkins, then, are why he’s not so worried about gravitational collapse.

“But many will split due to maximum growing pressures,” Dill adds, referencing the collapsing issue that affected the earliest Atlantic Giants.

The pumpkins will expand thanks to a combination of genetics and better growing techniques, says Oregon State University horticulturist Ross Penhallegon. “The growers are extending the season, adding more water, more nutrients, and more sunlight; each factor adds to the growth of the pumpkins.” Meier, for example, grew his pumpkin in a greenhouse in Switzerland.

Better soil additives and perfect growing conditions, while they help, don’t seal a pumpkin’s fate. Do not underestimate the power of human breeding to produce unnatural results. “What the pumpkins really ‘wants’ to do is produce seeds,” Egels points out. This means splitting open to spread its progeny. “We’re asking it to do things that aren’t really part of the mission.” 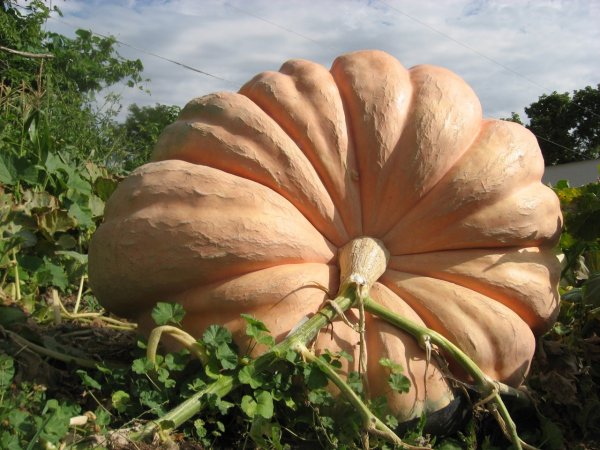 Nienhuis, who grows the giant fruits to carve into boats for pumpkin regattas, is keen on pumpkin genes. “I would say, and I can’t give you a number, but most of it is genetic,” he says. Something is going on with the biomechanisms of pumpkin growth, that allow it to bulk up by two pounds an hour. That world-record pumpkins come from all over the world lend credence to the hypothesis that a pumpkin’s gigantism has a genetic basis, Nienhuis says; were environmental factors to blame, you’d see the biggest pumpkins coming from the same area with only year-to-year variation.

Is a 3,000 pound pumpkin plausible? “Logic tells me no,” Nienhuis says. “But science tells me yes.”

He points to a 100-year effort to increase the oil quotient of corn, breeding the plants for more than 110 cycles, called the Illinois Long-term Selection Experiment. Corn that started with normal, low oil concentrations grew into something that resembled the high-oil content of soybeans. And the future gets even brighter if we can ameliorate the giant pumpkin’s current genetic state of affairs. “We’ve ended up with the English Monarchy. They’re ugly as sin,” he says. “We’re inbreeding the damn thing and still making progress.”

When should we expect to see these huge orange beasts? In Dill’s estimation, it might take 15 years to reach 3,000 pounds. “But it wouldn’t surprise me if someone did it within five years,” he says. “And it won’t be me…maybe?”

Should you want to throw your hat into the great pumpkin ring, Oregon State University has put a guide together with Pengellahon’s advice: Pick up some giant pumpkin seeds. Plant them, then murder all the pumpkin babies on a vine, except for one. The fruit that survives the culling gets all the nutrients, and with lots of tender care, just might land you in the record books.

22 Jokes You’ll Only Get If You Love Food More Than People
16 Jokes About Seasonal Affective Disorder That Are Funny Because They’re True
What is The Single Most Underrated Trait a Person Can Have?
Does Hiroshima and Nagasaki Still Have Radiation?