What is it like to be raised by two people of the same-sex?

Hey, I’m a teen girl being raised by a lesbian couple. I live in Illinois (USA), a pretty blue state, and I’m a cisgender, heterosexual, white girl. So obviously, my experiences don’t represent everyone, okay?

I usually don’t notice until someone calls attention to it. Parents are parents, whatever (or no) gender or orientation. They love me and take care of me. That’s what matters.

But gay people tend to be liberal, so that’s interesting. We have different standards than a lot of my friends’ parents. I’m not allowed to do more stuff, but we are a lot more open. People will talk about when they first had the sex talk with their parents, but honestly? I never remember not knowing those things.

They knew that if they presented me with a book and left the room, I’d come back later and say, “But you’re two women, and this says only married men can make babies.” So there was a concentrated effort to resist media heteronormativity and tell me that families come in all types.

It can be kind of awkward- forms that ask you to list who your father is (I don’t know, some random sperm donor?) school Father’s Day, people who ask who my mom’s “friend” is, people who ask if they molested me, etc. I had a friend who wanted me to pretend one of my moms was actually my aunt. Yeah.

For a long time I hesitated to respond to this question because the answer is so boring. But I think the mundanity actually reveals something important and often overlooked about same sex parenting.

Bill and Tim adopted me at birth in 1987. Bill was an up and coming lawyer in a big property management firm. Tim was a psychologist and the oldest male of nine kids.

Tim put his career on hold to raise me. Bill kept working to pay the bills and put food on the table.

When I started school, Tim packed my lunch. Bill donned a suit and tie and headed to the office early each morning.

Tim was a health nut. Bill took me to the movies and McDonalds.

Tim picked me up from school and cooked the family dinner. Bill couldn’t cook an omelet to save his life. He went on business trips and always brought me back presents from the road.

Bill was stoic. He hugged me but it didn’t come natural, as if affection was a second language learned late in life. Tim was fluent. He always wrapped me up tight in his arms. Tussled my hair. Kissed my forehead.

When I went off to college, Tim was sad that I didn’t call home more often. I’m not sure Bill even noticed I was gone.

When I joined the National Guard and was shipping off to basic training, Tim was beside himself. Bill told me to have fun.

When the love of my life left me, Tim held me like I was 10 again, and I cried on his shoulder. Bill took me to get burritos.

Here’s a picture of me with the parental units. Bet you can guess which one’s “Mom.” 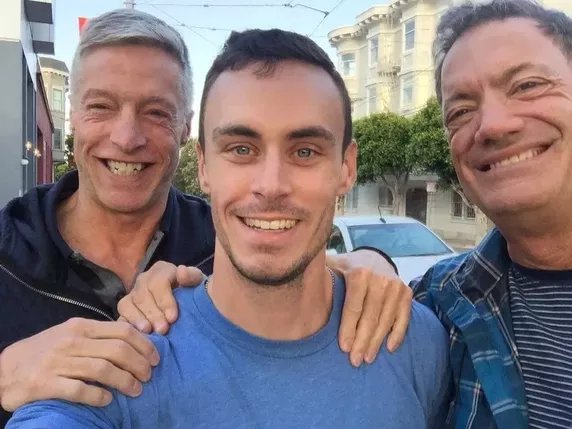 Some have been asking what I called my parents growing up. Dad differentiation was a constant struggle in the early years. At first I tried calling them both “Dad.” Didn’t work for obvious reasons. Then I called them by their first names. They didn’t much like that. Finally we settled on “Daddy” (Bill) and “Poppie” (Tim). Still using those.

Wondering who “Mom” is in the photo? He’s the one to my right, with the loving, you’ll-always-be-my-baby-boy, double-handed death grip on my shoulders.

For those wondering how Tim feels being called “Mom.” I asked him and he told me a story. Apparently, when I was in grade school I ran up to him one day and out of the blue said, “You’re my mom because you make my lunch and arrange my play dates and stuff.” To which he laughed and said, “Okay, Zach.” Point is that he has known from way back that I view him as a mother figure. So when he read this post, he said, being described as Mom “didn’t faze me.”