The British are frantically Googling what the E.U. is?

The whole world is reeling after a milestone referendum in Britain to leave the European Union. And although leaders of the campaign to exit Europe are crowing over their victory, it seems many Britons may not even know what they had actually voted for.

Awakening to a stock market plunge and a precipitous decline in the value of the pound that Britain hasn’t seen in more than 30 years, voters now face a series of economic shocks that analysts say will only worsen before they improve. The consequences of the leave vote will be felt worldwide, even here in the United States, and some British voters say they now regret casting a ballot in favor of Brexit.

“Even though I voted to leave, this morning I woke up and I just — the reality did actually hit me,” one woman told the news channel News. “If I’d had the opportunity to vote again, it would be to stay.” 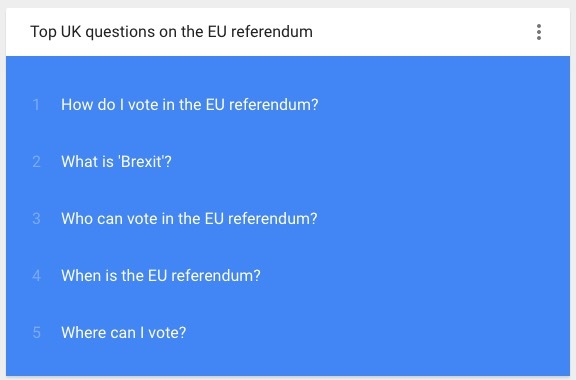 That confusion over what Brexit might mean for the country’s economy appears to have been reflected across the United Kingdom on Thursday. Google reported sharp upticks in searches not only related to the ballot measure but also about basic questions concerning the implications of the vote. At about 1 a.m. Eastern time, about eight hours after the polls closed, Google reported that searches for “what happens if we leave the EU” had more than tripled. 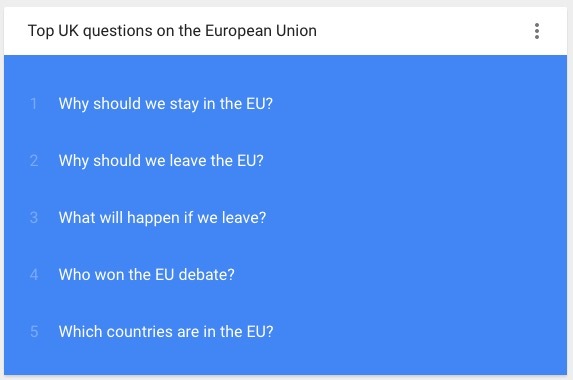 The run-up to the vote was marked by a bitterly divided campaign, one that was as much about immigration fears as it was about the global economy.

But despite the all-out attempts by either side to court voters, Britons were not only mystified by what would happen if they left the E.U.— many seemed not to even know what the European Union is.

“What is the EU?” is the second top UK question on the EU since the #EURefResults were officially announced
— GoogleTrends (@GoogleTrends) June 24, 2016

What is the E.U.? To be fair, that question will now take on a much deeper significance than perhaps Google’s users realized when they typed that into their browsers.

What Is The Dark Side Of Living In South Korea?
What Events Happened on November 5 in History?
20 Facts About Freddie Mercury Most People Don’t Know
15 Times Twitter Taught Us More Than Grade School And College Combined