The strangest incident that’s happened on a commercial airline flight

Here’s a good one that’s popular with us Pakistanis in an ironic sort of way. In 1986 Pakistan International Airlines Flight 300 had a belly landing at Islamabad airport because the pilot forgot to lower the landing gear. That’s right, he simply forgot to lower the gear on a 747 jet. There were no injuries and the plane continued to fly for 19 more years after repairs

There were 3 people in the cockpit that day, the pilot, co-pilot and I think what’s called the 1st officer. Normally there is an electronic safety system that alerts the guys in the cockpit about things such as the landing gear not being down.

This system is generally found to be irritating by pilots who can be quite dismissive and macho – trusting their own skills. In those days it apparently also made some errors in logic. And finally it goes “Warning! Warning!” in a loud shrill voice. So it was standard for PIA pilots at least to switch off the circuit breaker for this system and switch it back at 1000 ft

It was standard for the cockpit crew to switch back the warning system and for each of them to check that the landing gear is down as part of their landing checklist.

None of these things happened so the pilot basically landed the plane thinking that the landing gear was down. He only realised after hitting the ground that it wasn’t

The pilot called HQ right after getting off the plane and tendered his resignation. He never flew again.

The co-pilot Capt Ahsan Aftab Bilgrami flew again but unfortunately died when the plane he was flying crashed in the Himalayas near Gilgit. Boeing were ecstatic, apparently this is one scenario they had not stress-tested for. Here are some incredible pictures 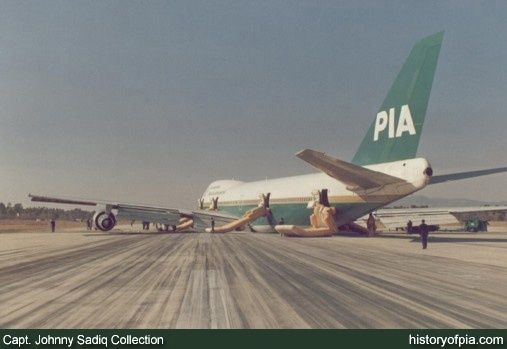 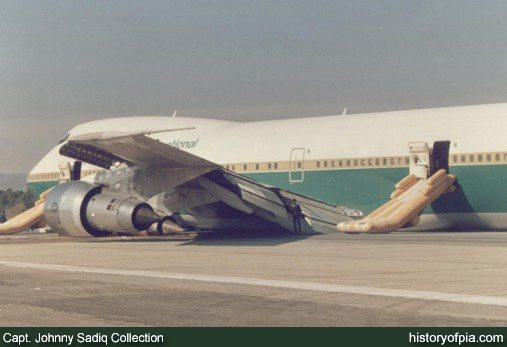 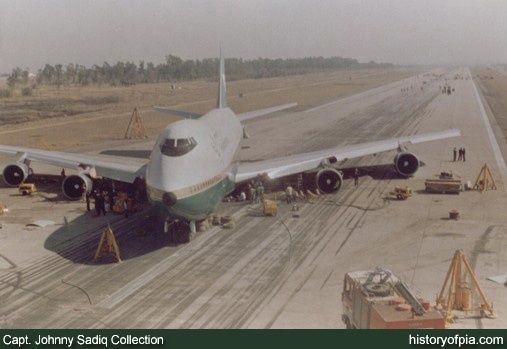 On January 4th, 2013, a passenger drank two bottles of duty-free alcohol he picked up at the airport in Iceland. He apparently then tried to grope two women sitting next to him, along with spitting on random passengers. 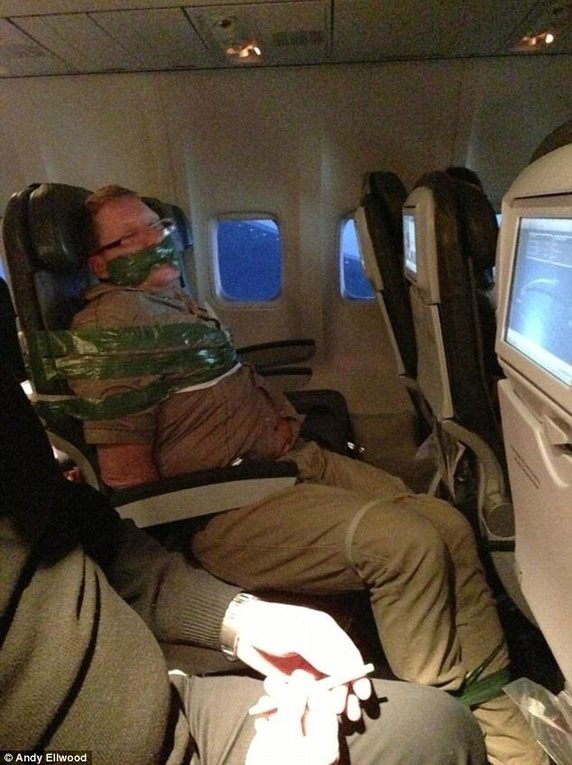 When he became unruly,fellow passengers subdued him and tie him up for the rest of the flight. He was escorted off the flight by police when it landed.

My favorite is the infamous Gerard Finneran story where the guy defecated on the drink cart:

A few years ago on a United Airlines flight from Buenos Aires to New York, Gerard B. Finneran, an investment banker, went totally bonkers. Newspaper accounts said that after becoming intoxicated, Finneran demanded more alcohol from the flight attendants. When they refused, he began helping himself to the liquor supply. After being cut off a second time, he became visibly angry. He pushed one flight attendant (federal offense No. 1), verbally threatened another (federal offense No. 2), interfered with a third who was assisting a sick passenger (federal offense No. 3), then walked up to the first-class cabin, dropped his pants and defecated on a service cart in plain view of the passengers and crew. Then he stepped in his own feces and tracked it through the main cabin (federal offense Nos. 4, 5 and possibly 6). Finneran was arrested upon landing in New York. He subsequently pleaded guilty to assault and was sentenced to two years probation. In addition, he was given 300 hours of community service and a $5,000 fine and was ordered to pay more than $50,000 in restitution to the airline and to reimburse fellow passengers for the price of their tickets. (Not surprisingly, Finneran’s lawyer said his client was “ill” when he committed the now infamous in-flight atrocity.)

The same post from which I excerpted the above story also lists a number of other good stories:

Passengers meet / have sex. Seated side-by-side on a 14-hour overseas flight, two business-class passengers became romantically involved. At some point they began kissing and fondling each other while sitting in their seats. The passion became so intense that the couple began having sexual intercourse in their seats. Bewildered passengers immediately began ringing their flight attendant call buttons. Despite the flight attendants’ urgent pleas, the couple refused to terminate their airborne lovemaking. Ultimately, the captain had to intervene. It was necessary for him to physically separate the lovers to get them to stop.

Diaper tossing. While a female flight attendant was serving food from the meal cart, a female passenger thrust a small bundle of trash toward her. “Take this,” the passenger demanded. Realizing that the trash was actually a used baby diaper, the attendant instructed the passenger to take it to the lavatory herself and dispose of it. “No,” the passenger replied. “You take it!” The attendant explained that she couldn’t dispose of the dirty diaper because she was serving food — handling the diaper would be unsanitary. But that wasn’t a good enough answer for the passenger. Angered by her refusal, the passenger hurled the diaper at the flight attendant. It struck her square in the head, depositing chunks of baby dung that clung to her blond locks. The infuriated attendant leapt upon the passenger, strangling her until passengers could separate the two.

Dead passenger. During a full flight between New York and London, a passenger noticed that the sleeping man in the window seat looked a bit pale. Sensing that something was wrong yet not wanting to wake him, the concerned passenger alerted flight attendants, who soon determined that the sleeping man was actually dead. Apparently, he had died a few hours earlier because his body was completely cold. Horrified by the prospect of sitting next to a dead man, the passenger demanded another seat. But the flight was completely full; every single seat was occupied. Finally one flight attendant had an inspiration. She approached a uniformed military officer, and he agreed to sit next to the dead man for the duration of the flight.

Crazy passenger slapping people. Passengers on a flight from Miami to San Juan, Puerto Rico, were stunned by the actions of one deranged passenger. He walked to the rear of the plane, then charged up the aisle, slapping passengers’ heads along the way. Next he kicked a pregnant flight attendant, who immediately fell to the ground. As if that weren’t enough, he then bit a young boy on the arm. At this point the man was restrained and handcuffed by crew members. He was arrested upon arrival.

Passenger punches flight attendant in face. When bad weather closed the Dallas/Fort Worth airport for several hours, departing planes were stuck on the ground for the duration. One frustrated passenger, a young woman, walked up to a female flight attendant and said “I’m sorry, but I have to do this.” The passenger then punched the flight attendant in the face, breaking her nose.

Passenger breaks flight attendant jaw. A flight attendant returning to work after a double-mastectomy and a struggle with multiple sclerosis had a run-in with a disgruntled passenger. One of the last to board the plane, the passenger became enraged when there was no room in the overhead bin above his seat. He snatched the bags from the compartment and threw them on the floor, then put his own bag in the empty bin. After hearing angry cries from passengers, the flight attendant appeared from the galley to see what the fuss was all about. When the passengers explained what happened, she turned to the offending passenger. “Sir, you can’t do that,” she said. The passenger then rose from his seat and broke her jaw with one punch.

Crazy fight. For some reason, a drunken passenger began throwing peanuts at a well-built man across the aisle. The man was sitting with his wife, minding his own business. When the first peanut hit him in the face, he ignored it. After the second peanut struck him, he looked up to see who had thrown it. He threw a harsh look at the perpetrator, expecting him to cease immediately. When a third peanut hit him in the eye, he’d had enough. “Do that again,” he warned, “and I’ll punch your lights out.” But the peanut-tossing passenger couldn’t resist. He did it one last time. The victim got out of his seat, then triple-punched the assailant so hard that witnesses heard his jaw break. The plane was diverted to the closest airport and the peanut-tosser was kicked off.

Dogs and Elephants Understand Pointing
What Does Obdormition Mean?
20 Interesting Facts About Kylie Jenner
18 Times Twitter Taught Us More Than The Education System In 2019