Whether we’re single or we have an SO (or we’re somewhere in between), prying family members will inevitably ask us when we’re going to get married. 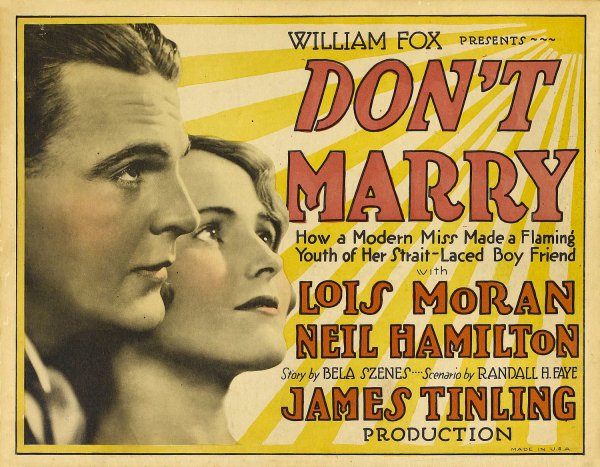 In 2014, a survey by the Pew Research Center showed that 61 percent of people over the age of 65 said marriage should be a top priority for bettering our society. Only 29 percent of Gen Y said the same, though. The age we’re getting married is certainly getting older on average as well, proving that even if we fancy the idea of marriage, we’re in no rush to walk down the aisle. The median age for men to get married for the first time is 27.1, and for women it’s 25.3. These are the highest median ages the U.S. has ever seen.

Millennials aren’t the only ones with cold feet, though. The U.S. Census reported that the number of couples over the age of 50 who lived together without getting hitched rose from 1.2 million in 2000 to 2.8 million in 2010.

Here are eight totally valid reasons to never get married.

1. Marriage Is Going Out Of Style

The Pew Research Center reported in 2010 that only half of Americans are married. In 1960, 72 percent of adults over the age of 18 were married, but today only 51 percent are. Two years after that, it was discovered that the number of never-been-married individuals in the U.S. was at an all-time high. One in every five adults over the age of 25 had never tied the knot, compared to one in 10 in 1960.

2. You Can Opt For A Domestic Partnership Instead

One of the benefits of getting married is that you’re legally recognized as a couple.

3. So Many Marriages End In Divorce Anyway

Admittedly, divorce rates have actually been in decline over the last two decades. In 2011, there were 3.6 divorces per thousand people, while in 1990 there were 4.7 per thousand people. People who married in the 2000s are actually seeing a very low divorce rate, particularly if they’re college graduates, out of which only 11 percent were divorced before their seventh wedding anniversary.

4. You Don’t Need To Be Married To Fulfill A Lifelong Commitment

Most of us grew up thinking that marriage was the ultimate commitment. That’s how it’s portrayed in movies, books, and TV shows. The proposal is when the birds sing and the string instruments play an ethereal melody that signifies eternity. Well, Hollywood doesn’t always get it right . If you’re in a relationship and the two of you know you want to be together for the rest of your life, why do you need a binding legal document to make that a reality?

Back in the day, love and affection were things nobody gave a rat’s ass about when it came to marriage. The whole idea of joining two people together for life was centered more on trading women for goods or property as if we were nothing more than material things.

6. You Don’t Have To Be Married To Have Children

A Pew survey in 2010 showed that four out of ever 10 millennials actually viewed marriage as obsolete, particularly when it comes to having a family. We know we can still be the legal parents of our kids without having to walk down the aisle.

7. You Might Feel More Independent If You’re Not Married

According to the 2010 Pew survey, 24 percent of single people believe that marriage will prevent them from accomplishing certain career goals. The vast majority of these same individuals flat-out believe that married folks aren’t as financially secure and generally happy as they are. Furthermore, it’s said that once you’re married, you tend to lose close friendships with some people in your life.

8. Not Getting Married Is Not Synonymous With Being Alone

Many of us understand that rejecting marriage doesn’t mean you’ll die alone, without anyone around to keep you company at night, save for a cat. Nor does it mean that you’re going to miss out on a commitment with someone you love. You can still date, you can still be in a long-term relationship, or you can enjoy the throne of singledom for the rest of your days — whatever floats your boat.