What’s the most inexplicable experience you’ve ever had?

I was ten years old. My elder sister had her birthday that day. We had been struck with a financial crisis due to losses in my father’s business and there wasn’t any money at home to celebrate. My sister loved to eat ice cream. She was asking momma to bring some ice cream for her birthday. My mother said not today honey, as she did not have money to buy them. She was crying in the next room, struggling to find at least 10-20Rs to get ice-cream for her but couldn’t find any.

And all of a sudden the door bell rang, and there stood my cousin’s friend (who had no chances to come by, and did not know that it was my elder sister’s birthday), and to everyone’s surprise he had brought 2 Kgs of Ice cream and we celebrated my sister’s birthday.

I still remember that day, and though it was like fourteen years ago, I remember vividly the tears of joy in my mother’s eyes.

Few years ago me and my cousins decided to take this ride. 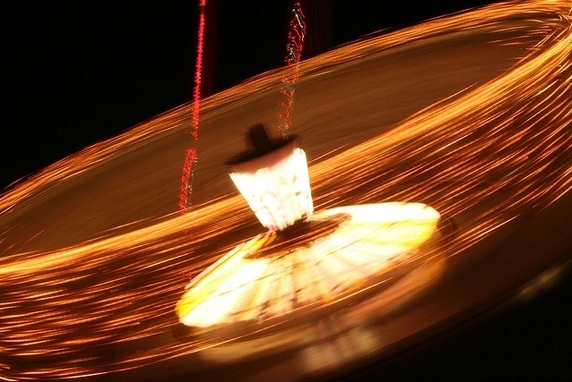 It spins really fast. As we all took our seats, the guarding rail came down on us. Then the ticket guy came to collect tickets, we all gave him. And the ride was just about to start …

Suddenly one of our cousins said I want to get down, I don’t want to ride. And the railing was pulled up again. Looking at him few other cousins decided to follow him out for no reason, while I saw everyone leaving. I also stood up and left the ride.

We all came down, lost our ticket money, for no reason – we were kids – and the ride started half empty… And we just looked on with a sigh.

As the ride was spinning, suddenly the railing broke off and everyone inside were thrown all over the place like stuff coming out of a open juicer.

People were seriously injured, no one died. But we just stood there in total shock! .. It could have been us!

In 2007, I was at university, taking on more than a full course load, waiting tables, doing volunteer work, and generally exhausting myself to death.

It was a Friday in March: I’d pulled an all-nighter the night before, and after finishing my afternoon classes, I decided to lay down for a quick rest before my shift at work.

As I was laying there with my eyes closed, this vision flashed up behind my eyelids of a person hanging, and then someone lifting them up. It startled me to the point that I sat up out of bed, giving up on the idea of sleep and deciding to get ready for work.

A couple hours later, I was waiting tables when a man came in the restaurant to see me.

I had never seen this man before, and when he walked in the front door of the restaurant, there was no indication that he was there for me. Yet somehow, instinctively, this uncomfortable feeling started twisting around in my gut. As he spoke to my manager, a feeling of dread passed over me. How did I know they were talking about me? I couldn’t hear them. They weren’t looking at me.

My manager sent me to talk to this unsettling stranger, and he gave me the news.

My younger brother was dead.

Before the man even explained how he had died, I knew: he had hanged himself.

It had happened at the approximate time that I had that vision.

I’ve never been able to fully make sense of it, but along with other experiences in my life, I think it lends itself to the suggestion that we – as humans, as living beings, as parts of the universe – are far more deeply connected than we observe in normal circumstances.

My grandmother saved my life.

I was visiting my grandparents. There is this restaurant we frequented. It had amazing and cheap chinese food. My cousin and I used to bike up there. I loved it.

One fine evening, my cousin suggested that we bike up there. I was free and bored. I agreed. An hour before we were to leave, my grandmother who had never had any problem with us biking or the restaurant begged us not to go. I wanted to know why. She said she had a bad feeling. I checked the news. There was nothing wrong with the town.

And moreover, they lived in a quiet and boring suburb where nothing interesting ever happened. No crime, no riots, no demonstrations, no threat to security. However she was adamant that we do not leave the house. And this was very unlike her.

So we grudgingly complied. We were supposed to be sitting there at around 8pm. Instead we were at home when it happened. In the exact same restaurant.

There was a gas explosion. Several people died. The place burned down.

I don’t know what it was that gave my grandmother the ‘bad feeling’. But she saved our lives.

Recreational Marijuana is Officially Legal in California
How Many Websites Are Hacked Every Day?
Guy on the far right looks like the man in the mirror from shrek﻿
Mumbai Air for One Day During Diwali = 113 Cigarettes