What is the weirdest thing you have ever seen?

Im leaving work one day and i stopped at the intersection on a red light. As i was waiting a man started across the crosswalk. At first he looked normal enough but then i saw he had his left arm pulled inside the jacket as the sleeve was hanging loose and free. Amputee? not likely, i think the arm was helping to support the HAMMER that was inside his hooding just barely visible hanging down from this slightly unzipped neckline.

Broad daylight, man walking around hiding a hammer. Not a worker for sure. Just a hammer strolling down the street. not withing 10 miles of any workshops or houses or even apartments.

I was walking outside my house one day, when i noticed a hole in my lawn. At first i thought an animal or something because it was relatively deep. Upon further investigation i realized someone stole it… someone stole dirt…

1. cuts were smooth and straight, indicating a tool was used.

2. no loose dirt or sod were found in or around the hole. Therefore it was carried away.

3. hole was about 2 feet deep. so not just the top layer that comes when you dig up sod, they kept digging a second or third time AND TOOK THE DIRT WITH THEM. 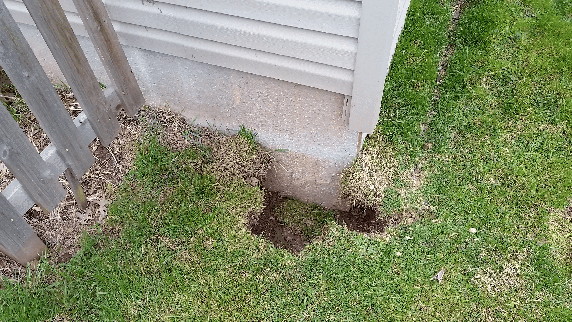 it is the weirdest thing i have ever seen in my life.

After note. The piece of sod in the hole i knocked down when i was making sure it wasn’t a burrow. It makes it look like a sinkhole but its a trick of the eyes. There is no perceivable explanation for what happened to the grass.

If I had filmed it, I could have sold the footage for a good money, or used it to become a kind of internet personality.

I was driving up a steep street in the town of Bicas, Minas Gerais, Brazil, close to where I live. There was a pedestrian crossing painted on striped red and white over an elevation. Traffic was not particularly heavy (it is a small town, 12,000 inhabitants) that day. Then I saw her. I must use this pronoun to acknowledge that it was no beast, but a sentient, and intelligent being.

A she-dog was walking by the sidewalk with two puppies following her. When they reached the pedestrian crossing, the she-dog stopped with the puppies, looked left and right and saw me approaching. She tipped the crossing with one of her front pads. Just for the laughs, I stopped and flashed. My daughters had also seen her, so they laughed at me. But our laughter turned to bewilderment when the she-dog pulled the puppies with her mouth and crossed the street up to the other side, in an almost straight line, over the pedestrian crossing.

I must say I was bewildered because most people are reluctant to do what that she-dog did: stop, pay attention, request preference, acknowledge that preference was given and cross the street right over the crossing.

It gave me the impression that that she-dog is more intelligent than many people I know. That was not instinctive. That was learned behaviour. She had seen people do it, understood the meaning of the gestures and imitated them when she needed.

Ever see a nun take a dump?

A friend and I were walking to his house after school. There is a shortcut to his house, but it requires walking across a parking lot that is divided in half by a building in the center (black box in drawing). The bottom half is empty and abandoned, while the top half is populated with people’s vehicles along with some restaurants and stores around it. Here’s a drawing to help you visualize: 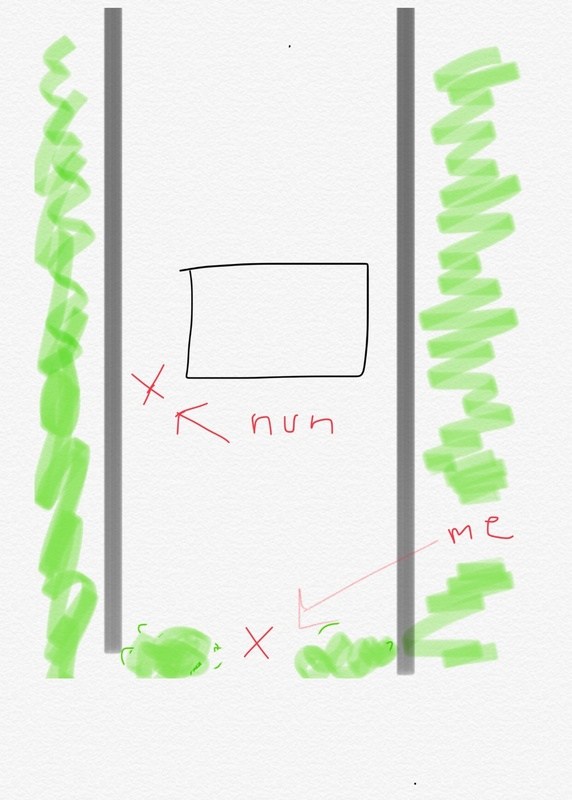 We were just entering the parking lot from a trail, and suddenly I saw the most random thing I had ever witnessed. Behold, a nun taking a steamy massive shit against the fence. The timing was ridiculous. I must have been half a football field away and I still managed to look just as she squeezed a giant holy turd out of her bottom.

I alerted my friend to what I had just witnessed, but it took a moment for him to realize what was going on. It was pretty clear that he figured it out when he screamed, “WHAT THE FUCK!”

The nun, clearly startled that she had been spotted, did not take a single moment to consider wiping her ass, pulled her underwear up and began to run to the populated area of the parking lot. She must have thought we were chasing her since we coincidently had to walk in the same direction.

This was the moment that threw me off. She was running to her car, and she had eventually sped off. But she parked right next to Ninety-Nine and McDonalds. So this means she walked across an entire parking lot the size of 2 football fields to shit against that fence.

Why didn’t she just use the bathroom? For the thrills perhaps. I will never know.