What are some common forms of sexism that men face?

One of the biggest examples I can think of is regarding military service (conscription), especially if it’s compulsory. Many countries exclude women from military service, but men need to serve. It’s blatantly sexist. It’s not a structure that women, or feminists designed or imposed, it was created by a patriarchal society that views men as warriors and women as either delicate flowers or incompetent, overemotional, irrational beings. Actually, feminism is breaking down those barriers as women are now taking more active roles in the military, including combat, at least in some cases. It’s not fair to expect that men should sacrifice their lives for their country and women should not.

Yes, you read that right. The law in India is very sexist. It discriminates against men. Here’s how:

1. Laws for Sexual Harassment or Rape:
After the amendment bill passed in 2013, the moment a woman files an FIR (first information report) against a man, the police will arrest him. The investigation occurs later. All a woman has to do to ruin someone’s life or reputation or to blackmail someone, is fake a few bruises and file an FIR! 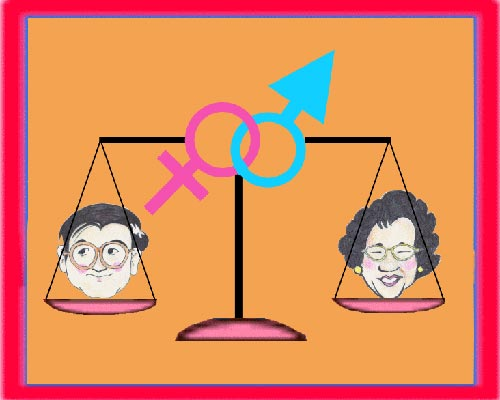 2. Dowry Death (Section 304B on Indian Penal Code):
If somebody’s wife dies of any cause other than a natural death within 7 years of their marriage, a criminal case may be filed against him. And if any investigation leads to any kind of proof that soon before her death she was subjected to cruelty or harassment by him or any of his relatives, the death will be considered a murder for not fulfilling dowry promise or for extracting more money from her family. Punishment: 7 years to life imprisonment for him and his relatives

3. Domestic Violence (Section 498a of Indian Penal Code):
If a lady goes and files a complaint against her husband or in-laws to a nearby police station, they are ASSUMED GUILTY, till proven innocent. So the burden of proving their innocence lies on the husband/in-laws, else they can very well rot in jail. This section is non-bailable (they have to appear in court and get bail from the judge), non-compoundable (complaint can’t be withdrawn) and cognizable (register and investigate the complaint, although in practice most of the time arrest happens before investigation)

4. Adultery (Section 497 of Indian Penal Code):
Only a man can be proceeded against and punished for adultery, but the wife cannot be, even as an abettor.

These laws were made with a good intention. There is a HUGE section of women who are facing domestic violence or dowry abuse. They have helped that section, yes. But they have also left a lot of scope for misuse. These laws have made it easy for a girl to blackmail someone with a false rape/harassment. Also, in cases of a strained marriage or disagreement, the wife can easily harass her husband and in-laws to get her demands met. And such misuse has become common in India these days. The conviction rate is very very low, but the time spent in jail or the social stigma associated with such a case has caused suicides as well.

This doesn’t mean laws protecting women shouldn’t be passed. They are needed, they MUST be passed, but the lawmakers should foresee possible ways of misuse, and make rules for deterring such misuse. As of now, even if a rape or domestic violence case is proven to be false, no action is taken against the girl. No penalty or jail time for wasting the court’s time and insulting some one terribly. Yes, the victim can file a suit for defamation, but that’s another long process. And whatever the judgement may be, the defamation CAN NOT be undone.

I do believe in gender equality and women empowerment, but women empowerment should occur through education and financial independence. Not by giving them a weapon against men, a weapon that can be used without repercussions.