What is one thing you caught your parents doing that you wish you had never seen?

I don't want to see this again.

In high school I worked part time at Arby’s. I busted my rump and worked like a slave during my shifts because I really enjoyed that job and I needed the money for gas, phone bill, etc. I would often come home sweating grease and smell like a rancid onion just freshly peeled. This particular night, a fucking Friday of course, was absolutely horrid and filled with the usual slack of Co workers and griping, hateful customers. When the clock hit 10 I hung up my grease stained hat and apron, giving a large mental middle finger to the place and wishing my Co workers a good night.

Now I should note I did not get off any earlier or later than I usually did.

I arrived home at my expected time and sluggishly half walked/half crawled down the hall towards my bedroom. I had to pass my parents room in order to do this.

An orange blur in the corner of my eye appeared.

I turned to look and-OH GOD!-my dad was buried between my mother’s thighs and lo and behold her orange socks was the blur that caught my attention. I shrieked in surprise and disgust whilst running like a mad man to my bedroom. Now not only was I dead tired and exhausted from a hard day at work…my stomach was threatening to regurgitate its contents.

My mom still denies it to this day. I call her “orange socks” and she gets irritated haha. Or, more hilariously, Agent Orange. 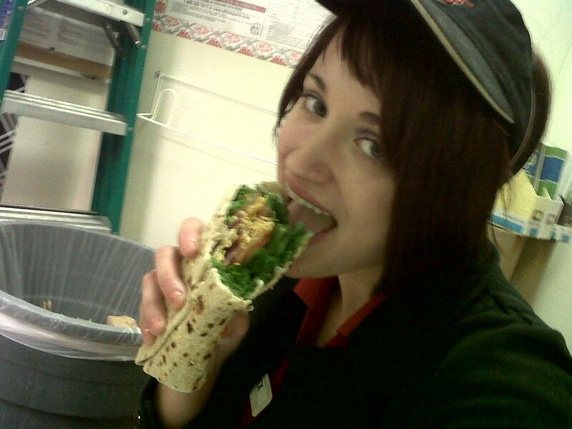 I was 16 and in bed. My father was prudish but my mother not. My bedroom was at the bottom of the stairs up to their room. Apparently my mother decided to cheeky flirt by tossing cold water onto my dad in the shower so he got out and chased her, trying to hug her while she had her good work clothes on. Anyways, I’m minding my own business with my CD player and headphones on and it’s 10:45-11pm. I don’t remember how or why their bedroom door opened because my mother was laughing too hard but my dad ended up rolling down the stairs and into my room. Naked. I’m looking in shock and keeping my eyes up at his face as he covers his junk and he yells at ME! He’s like, “Amanda! Go to your room! And I was so flustered I just said, “but, daddy! I am in my room!!!” He got up, careful to keep his butt and privates hidden and he’s like, “Good! Go to sleep! I’ve told you about these headphones. I don’t want to see this again.” And I just snarled back “I don’t wanna see this again either!”

My mother was about dead by then. Her laughter was silent and she’d slid to the floor as my dad did what sounded like the fastest upstairs naked dash ever.

*Another for your amusement. Again, graphic, but only to total prudes*

Rewind 8 years to when I was 8 and my dad was showering. There was opaque glass so nothing was visible so my mum thought it’d be ok to let me in to brush my teeth. I’m partway through and I hear, hey, look at this. What do you think?” And I turn around to see my dad’s ass pressed against the glass so it was the only part of him visible. I spit out my toothpaste and said, “I think you need to shave, daddy.” He slipped as I rinsed and he asked how I got in. “Mommy told me to brush my teeth for bedtime.” He wasn’t even mad. He was just like “ok, punkin. Next time tell daddy it’s you in here. Grown up boys or even little boys shouldn’t be showing or touching underwear places on themselves to you or asking to see yours, remember? Not until you’re grown up and can say if it’s ok. But you’re still my little girl so too young.”

My dad was all about my personal space and consent from a very young age. And it kills him to this day to know I was raped at 13 and even as a fireman and with all the cops in my family, nothing could be done to undo it or catch the guys. But his consent issues made the shower situation funny because it was just a butt and he promptly fell on said butt out of startling.

Going anonymous as I don’t want my parents to know about how much impact this had on me.

I was about 16 years of age when this happened. It was the last week of the month and a few of our family friends visited us for chit chat after dinner. When they showed up and said, “hey guys, lets have ice cream together,” my parents said yes very reluctantly and they just went inside one of the bedrooms. I was not sure why they were not excited as I was sure as hell thrilled to eat ice cream. After some time, when they didn’t return from the room, I opened the door and walked in to see, that they had opened up my piggy bank and were counting money (pennies, coins, some notes). I was shocked that they had opened my piggy bank and when they saw me standing, they said “honey, sorry we have to use your money for ice cream now as papa is out of money for the month and will return it back on 1st of the next month when salary is received”. I just looked that their pale but hopeful faces staring at me. For some reason I understood the situation, and they gave me 180 rupees to run down to the store to buy some ice cream, which I did and we all had it with the visitors.

I really wish I had not seen this as it created a sub image of my parents (being helpless and short of money) in my mind which I can’t get rid of. It changed me in a way that I simply decided to earn money so desperately that my parents never are short of money by end of the month. In that process, I went away from them for years to stay abroad and earn, ran behind money and stability like crazy hell. Gave up on all entertainment and fun in youth to just focus on money and getting family out of financial troubles. Today we are not millionaires but have bunch of properties in US and India, earn very well, have good money to spend.

But I wished I never ever get to see that sorry state of financial affairs for my parents again. I saw it once and wish to never repeat it. Have spent my life sacrificing a lot to ensure it.