The craziest excuse for late to work

In my office there was an employee who was fired 20 years ago, but his excuses for being late or staying home still live on.

He had dozens of dead relatives, and multiple ongoing problems with his car. He even was late one day because he backed up over a cat and was too upset to drive.

But I think my favorite one was when he was waxing his kitchen floor, and waxed himself into a corner. Apparently he had to stand there for an hour until the wax dried.

I’ve never met him but I feel that I know him well from his excuses.

UPDATE-
Yesterday I wrote the answer above. This morning I woke up after a windstorm overnight to find my dead end street completely blocked by a downed tree. 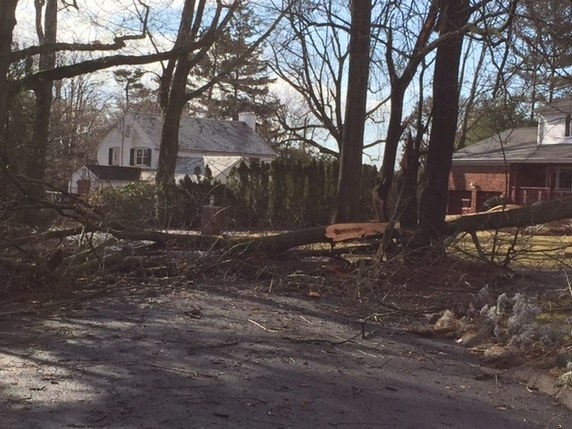 I just emailed my excuse for being late to my boss. Her joking reply-”You sound just like (fibbing ex-employee)”

Even 20 years later his legend remains. 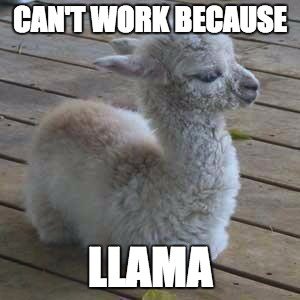 This from an IT manager responsible for 36 programmers and QA staff at a billion-dollar company. She raised llamas in her spare time, so it was probably the truth.

Even funnier, she didn’t seem to think it was an unusual excuse! Sick kids and funerals can’t be avoided, but she mentioned it as if HR gave everyone three “live llama birth” days a year.

Llama birth became the default explanation for employee absences and an excuse to get out of social engagements:

She was a coworker, not an employee, so I hope this still counts.

A fresh hire, and trouble from the start. Told the supervisor that she had to have Mondays, Wednesdays and Sundays off for church, needed Tuesdays off for classes at the Y, needed at least one evening off to spend with her husband, and so on. She was the kind of person you knew wasn’t going to last long, especially in a hospital setting. You just don’t get to name your terms like that. But for whatever reason, she got hired.

Anyway, one day, she went home for lunch. We didn’t get a long lunch, it was usually right on a half hour and not worth going off-campus. But she drove home to her apartment across town, and we didn’t hear from her for a couple more hours. Finally, she called and said, “I came home and forgot I was working today. Can I just stay? Do I have to come back in?”

The supervisor said that no, she did not have to come back in. (Ever.)

Back in the late 80′s, we had a coworker whose excuses were the stuff of legend. Some of his greatest hits were:

1. He had opened his bedroom window for some fresh air and set his alarm clock on the sill. A thunderstorm came through during during the night and blew rain through the window, shorting out the alarm clock.

2. He had a buddy who lived way out in the country and was on the waiting list for some kind of eye transplant or something. The medivac helicopter sent to pick the guy up couldn’t find his property in the dark, so they flew to our coworker’s house and picked him up to show them the way because he was the only person who could recognize his buddy’s property from the air at 2:00 AM. (This was pre Google Earth.) The medivac didn’t have time to drop our coworker off at home on the way to the hospital, so he ended up stranded at the hospital while they rushed his buddy in for his transplant.

3. He was still living with his parents and his mother made fish for supper. He swallowed a bone and it got lodged somewhere in his digestive tract. This caused him to lapse into a coma after he went to bed that night and it took his parents three days to realize it and revive him.

I want to say he lasted about six months. I don’t remember if he officially quit or if he just stopped showing up. For all I know, he was kidnapped by Malacca Strait pirates, managed to escape and is still swimming across the Pacific to get back to Texas. He’s got to be at work in the morning.