My parents had a Samoyed named Smoochie, who was a big white puffy thing who loved to act like the sweetest dog in the world. One weekend my boyfriend and I were watching him, and things were going well. We had gotten a piece of cheesecake from Safeway (it came in a plastic container like this one. Notice the snap closure, and how it is closed with a label.) 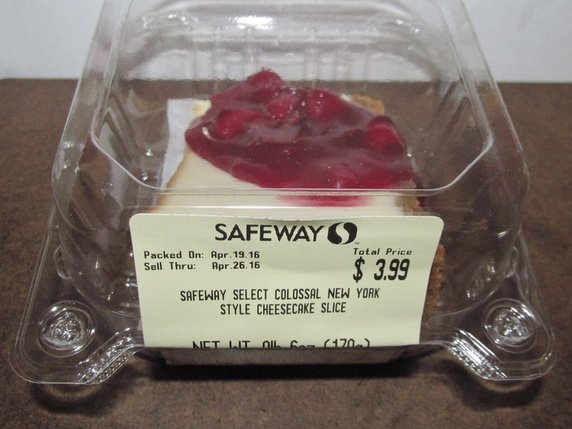 Smoochie had his eye on this piece of cheesecake all night. When he curled up in his dogbed and ‘went to sleep’, we went outside to smoke a cigarette. (this was back when I smoked :P ) This took about a total of 5–7 minutes. We came back in the house and sat back down to continue our movie. Smoochie was still in his dogbed ‘sleeping’. About a half hour later I felt a craving for some cheesecake, but … It had disappeared! I stopped the movie so my boyfriend and I could look for it. Smoochie is still ‘SLEEPING’ in his dogbed.

I finally found the container, completely empty, near his bed. He had somehow stolen the plastic container, opened it (which can be hard for humans!) eaten the entire piece of cheesecake, licked it clean, and somehow CLOSED the container again to make it look like it had just disappeared!

My only guess is that he had been calculating how long we would be outside, and planned his attack while ‘sleeping’ in his dogbed. Crafty little bugger!

This was Smoochie – he passed away about a year later at the ripe old age of 16. 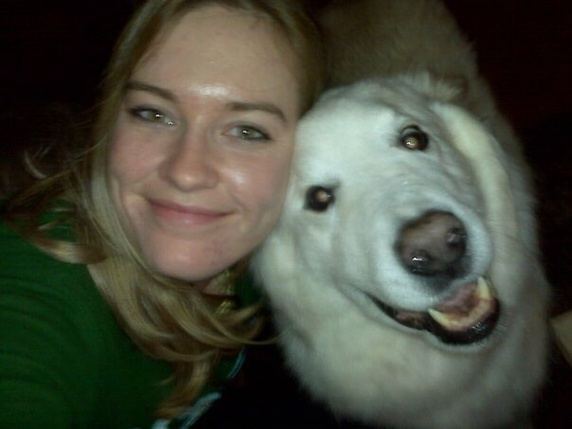 Oh yes, but to be fair it was two against one.

I was lying down on the couch enjoying a lovely piece of cheesecake with my fingers when Marmalade the cat, who was not an overly friendly cat, jumped on my stomach and began demanding pets with the hand that held the last and most delicious piece of cheesecake.

I was not about to have a hairy piece of cheesecake nor was I about to share.

So I extended my arm far far away from the cat, so far in fact it was no longer even on the couch at all. My arm and the piece of cheesecake that was being held between my thumb and forefinger were sort of dangling in midair between the couch and coffee table.

Out of nowhere like some sort of dog ninja our shepherd ever so delicately removed the piece of dangling cheesecake from my fingers and waltzed away very casually. The suddenly needy affection-seeking cat pounced off me and followed suit.

The cat and the dog stopped in the foyer area, the cheesecake hit the floor, and the two of them licked at it TOGETHER. I sat and watched in awe, mouth agape. When they were done, they both looked my way and I swear they smiled.

That was the best thing I’ve ever seen.

I was outsmarted by a bear. It was many years ago, and it was my first encounter with a wild bear. I had been stringing up our packs (bears had not yet learned how to find the tie point and break the cord; this was many years ago), and a bear appeared out of the trees. He looked at us, and started walking around us, from a distance of about 40 feet. He was slowly circling. I threw some rocks near him (being careful not to actually hit him; this was my first confrontation with a live beast, and I didn’t want to anger him). But he just kept circling. As he completed a half circle, I suddenly realized that he was heading directly at my pack, which I hadn’t yet strung up. A moment later he picked it up in his teeth and quickly ran away. I had the sense that by starting on the side of my opposite to my pack, that he knew I would not realize that his path was designed to intersect my pack. He was clearly a bit scared of us too (this was many years ago), so instead of just bullying his way in, he outsmarted me.

I followed the bear, from a distance, and finally found my pack; he had taken all the food out, and left the rest. That was fortunate, since it had most of my warm clothing within. The pack had two large gashes where he had clawed it open; I still own that pack, and I show it to people occasionally.

Ten minutes later the bear returned. Everything had been hung up by then, but I still didn’t like him being back, looking around for something else to steal. By this point, I had gained courage (maybe because of how quickly he had left the last time); I picked up a big stick and swinging it, I charged at him. He scampered away.

Thinking about it afterwards, I realized I had been pretty stupid, and never in the subsequent decades of backpacking did I ever run after a bear again.

My wife Rosemary did. She lost her temper (and this was decades later) when a bear stole her chocolate bars; she chased after it (this was at 2 am) but it outran her. She should not have done that, but losing her chocolate bars on the last night of a week-long backpack trip made her furious.

So this all started from the myth “will your cat eat your corpse”, it suddenly came across my mind so I decided to do an experiment. I came back from the gym, played with my roommate’s cat for a while and, fell down the chair, pretended to be dead. The cat is definitely surprised at first, he walked around me for a short while and started to rub his head on my hand, then he scratched my hands with his paw. I had a smirk smile and the cat might have spotted that, so after like two minutes he started to mind his own business. I decided to play dead for a little longer, see whether he would be fooled, while looking at him discretely. The cat played with himself for like five minutes, and that’s when I realized that HE IS ALSO LOOKING AT ME, DISCREETLY. So I closed my eyes, relaxed and decided to go even a little bit further, I “died” for half an hour, the cat didn’t do anything, at the time when I thought he left, I finally opened my eyes, then I saw the cat making the “I know what are you doing” face. Little did I know, the animal had been lurking right in front of my face, observing me for half an hour straight, without me noticing his presence. In fact he knew I was playing dead right after he spotted the smirk smile, he didn’t even bother to wake me up to tell me that he already knew I’m playing dead, instead he waited patiently for me to waste my time, believing that I actually fooled him. I felt like my IQ is defeated by a damn cat.

20 Things Our Pets Do When We Are Not Looking
How do you know if you have become an adult?
Why Did the Romans Call Christians Atheists?
While thinking deeply, is it more productive to stand or sit?