One guy brought his mom on our first date — without knowing she’d already contacted me, and our “date” was actually his surprise birthday party.

On a trip to Seattle a few months ago, sleepless after a stressful day of meetings, I flipped open Bumble to check out the local menfolk. Burned out on the selection back home — every date in the Bay Area is a drink with an entrepreneur trying to scale his disruptive startup, and Machu Picchu on the weekends — I was reenergized by the fresh offerings of the Pacific Northwest, a place where it seemed people could climb mountains for fun, with no obligation to post a selfie.

I struck up a conversation with a Seahawks fan in the boondocks that we’ll call Jay, who disarmed me with his liberal use of emoji.

Jay’s profile revealed that he “builds rockets ;)” and competes in Mr. Olympia bodybuilding pageants. Yep, like this: 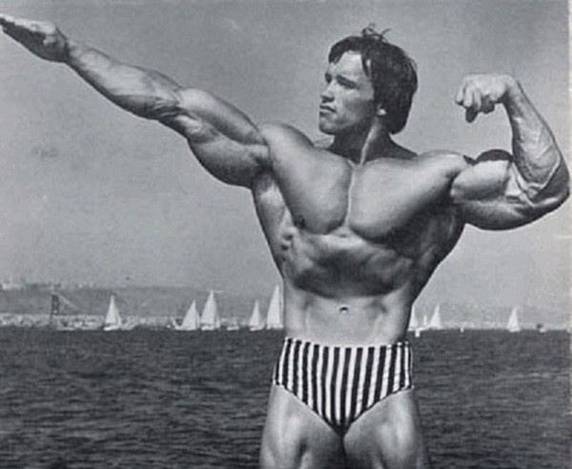 Could such a balance of brain and brawn exist in a real person, or was I being cat-fished? Awestruck as I might’ve been, I was hesitant to accept J’s request for a drink without an additional layer of vetting.

I found the guy on Facebook, and he checked out — but by the time I got back to him, I only had 24 hours left in town and no energy for a date. Oops.

Fast-forward a couple months later. I was heading to Seattle again last weekend, much sooner than expected, so I pinged Jay to see if he was around.

“The obvious solution here is to invite your mom on our date,” I replied.

I was mostly joking, but figured the risks were low if he took me seriously. First dates are already awkward, so I thought it might be nice to have a buffer. My own mom passed away when I was much younger, too, and it’s always a special treat to hang with women from her generation.

We agreed to meet at a little bar near my Airbnb.

T-minus 48 hours until our drink, and I get this message on Facebook, notifying me of a scheduling conflict: 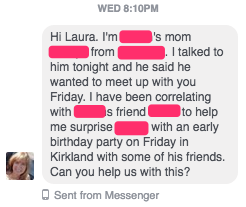 I had no idea how Jay’s mom tracked me down. I guessed this was my earlier sleuthing of her son coming back to bite me.

My mission, as she delivered it: Insist Jay meet me at a chain restaurant where all his closest friends would be gathered. “Or if that’s too complicated, I can just tell him,” she continued. “And spoil the surprise.”

I was horrified at how quickly this had escalated, and how my hands were tied: I couldn’t ask Jay what to do without spoiling the surprise; I couldn’t tell Jay’s mom I didn’t want to meet his friends and family, because he’d asked me not to reveal how we (had never) met; and I couldn’t ask her to pick a different night because she’d already driven 600 miles for this.

Instead, I scrambled to find Jay’s friend on Facebook to introduce myself and get his recommendations on how much of a trainwreck it would be for a complete stranger from a dating app to crash Jay’s surprise party. What if he had other lady-friends?

But the guy never answered, and Jay’s surprise party was now just hours away, so I had to throw caution to the wind and make it happen.

I battled much resistance from Jay (“I don’t want to take you to McMenamins; they have mediocre beer”), 30 minutes of rush-hour traffic to the boondocks and my own strong desire to hit the ejection seat — but I did it.

Jay’s 37th birthday party, brought to you by the Internet: 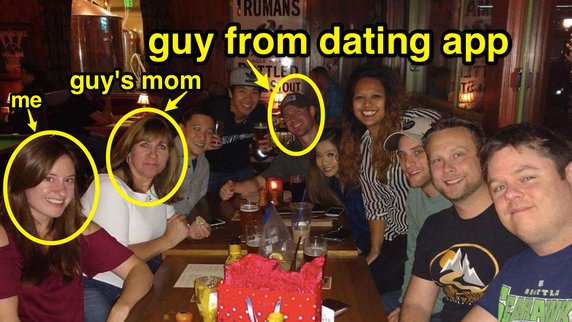 Best parts of the night:

1. His family and friends had zero clue who I was, and looked especially confused after his mom’s toast “to Laura for helping organize this party”

2. Obvious signs that I’d never met Jay before (“Sorry, what does Jay do for a living? … Oh, cool, does he have siblings?”)

3. Getting social proof that yes, he really is a rocket scientist, bodybuilder, blue-eyed bachelor, gentleman, and all-around unicorn with no other women in the wings

4. The Zip-Loc bag of pasties, a traditional savory pie, that his mom brought from Montana

5. Going out to the parking lot with Jay to fetch the above from his mom’s trunk — our only alone time together, which we spent having a good laugh at our little secret

6. Jay’s profuse apologies that I was dragged into this, and deep respect for my willing participation

The next day Jay sent me a flattering note on Facebook, thanking me again and regretting that we live far apart. I doubt we’ll see each other again because of the distance and my work, but I’m certain we’ll remain Facebook pen-pals for life. It turns out we have some things in common, including losing a parent and a cheese-tastic outlook on life that “everything happens for a reason,” etc.

And I’ll always remember Jay’s birthday — it’s the same day as my mother’s. 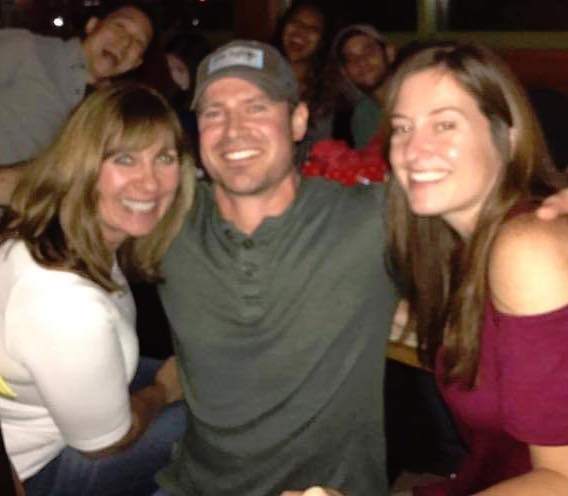 Why Are Bananas Curved?
What is Known As an Animals Personal Space?
What Events Happened on January 11 in History?
Hedgehog Ball Button