Don’t Lick a Dog’s Face. Ever.

It could be dangerous at the worst and confusing at the least.

I’ll never forget the day I learned how to think like a dog. It wasn’t by choice. I found out just how quickly a canine can spook though, and I paid the price in blood. That was the start of me really “getting” how a dog’s mind works.

I was in Austin Texas in 2010, and it was around 1am. I was on the couch next to my buddy’s puppy, a sweet Vizsla that had slept on my feet the last three nights. I was feeling pretty chummy with the young pup.

I leaned in to give the dog a hug with a big toothy grin (a sign of aggression to a dog, particularly a puppy who doesn’t yet know better), and she spooked. Let’s have a look at the result: 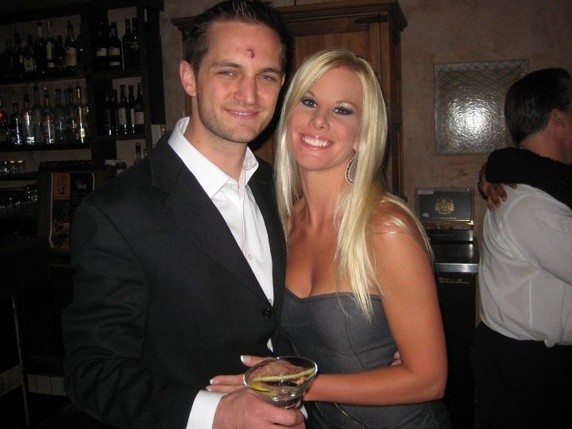 Long story short: Don’t put your face anywhere near a dog’s face unless it’s your dog, has been your dog for a long time, and isn’t likely to react badly to a perceived threat. Even then, be damn careful.

I’ve still got scars on my jawline and forehead to remind me of that lesson.

I’m still friends with the dog, too. It was entirely my fault. There has never been another such incident for either one of us.

I just licked my dog’s face. She was lying on the couch and sleeping and just got close to her and licked. She just looked at me for 3 minutes and licked me back. I got a few dog hairs in my mouth but well, when you are living with two dogs it isn’t something unusual. 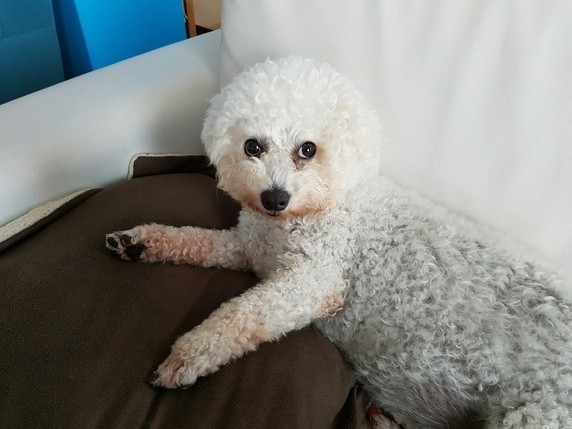 This is her reaction. Fun indeed.

I just tried it for the purpose of this answer. And I’m not on about a little doggy, who you can pick up. No, I did one better. I licked a Doberman. 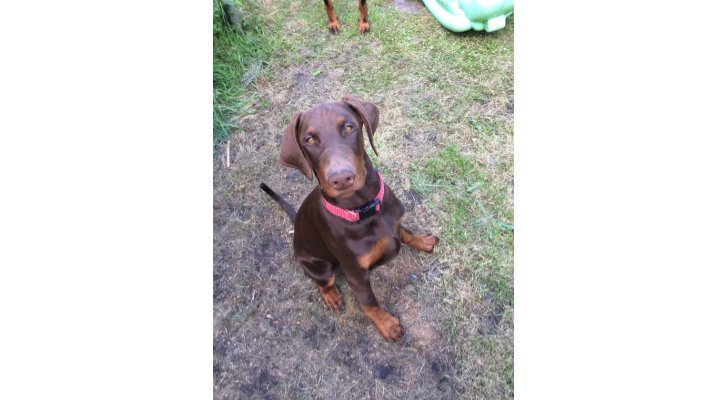 This is mine. This is the one I licked. His name is Reddington.

I licked his nose. He just looked at me kinda scared. And he just licked me back.

I also tried it on Sonar 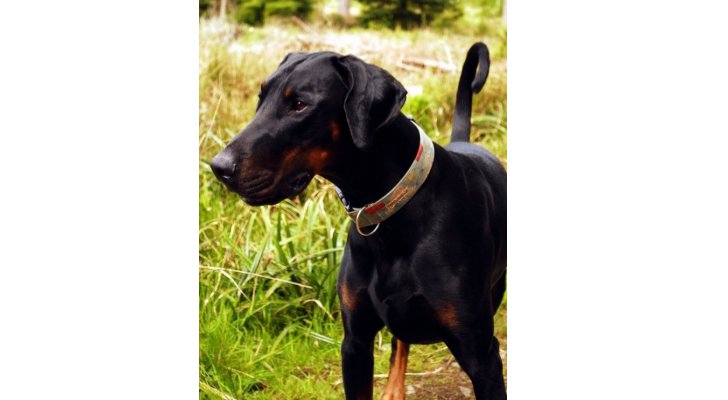 He just walked off. I don’t blame him to be honest!

I tried this once because my niece asked me what a dogs nose tasted like.

So we tried on this beauty. 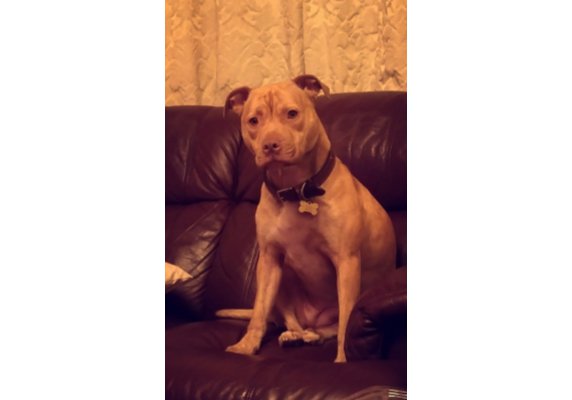 I shouted the beast over, with no response. We searched the house and found her snoring away on my bed upstairs. We crept in, as quiet as could be and BAM licked her right on the nose – to which I got this reaction.. 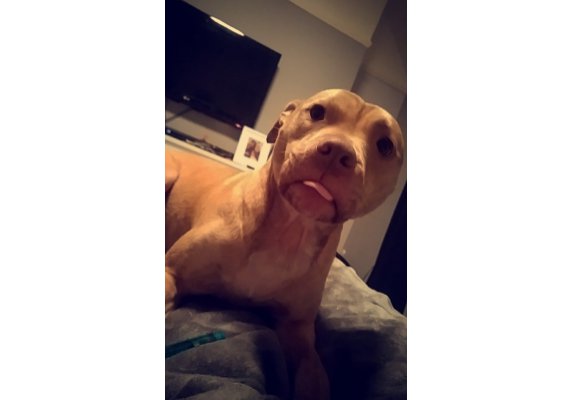 She was not a happy bunny. She stuck her tongue out, turned round put her bum in my face and went back to sleep. Experiment over. It tasted salty. She refused to speak to me for hours.

Fast forward a week, my niece walks up to her. Sit Lola, stay. Bam *licks her face* and starts laughing. She licks her back and they both get on the sofa and cuddle all afternoon. 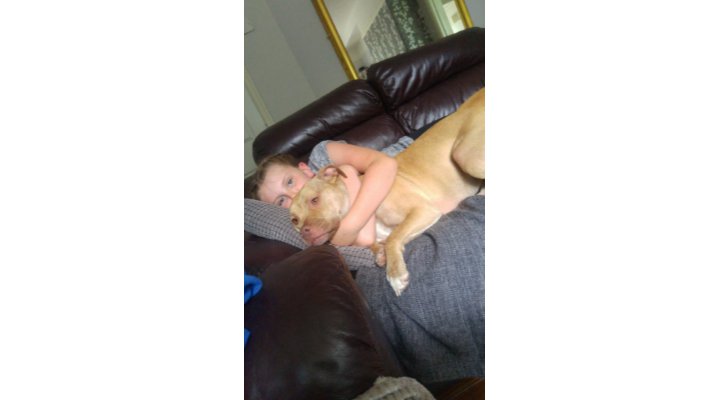 So in conclusion, it doesn’t taste good and be prepared for your dog to throw a tantrum unless you’re a cute little kid.

Face licking is a dog’s way of showing a bond and submission in the pack. If you lick your dog, you are sending an amazingly confusing signal effectively trying to lower your status in the pack by demonstrating a very intimate submissive behavior. Depending on the typical relationship with the dog, the dog may react with a hyperactive movement indicating the beginning of play to an all out aggressive display based in fear or frustration.

I haven’t ever licked a dog but I’ve hugged and tickled and played with many of them. My worst experience happened earlier this year while grooming the winery dog, a dog that I’ve known for over 6 years and lived with for two. He was laying on the patio and I sat down to pet him and pulled out a few stray fox tails (none of which were stuck in – they were just laying in the fur). I moved from the neck and continued back slowly toward the haunches. He was relaxed and calm, laying on his side, his tail was thumping the ground and he seemed to be very much enjoying the attention.

Within the blink of an eye he turned up and back at me snapping at my face which I was lucky enough to move out of range. I rolled back and away from him and he continued the attack biting me eight times in the back of my left arm through a t-shirt and long-sleeve flannel.

Here’s what I got: 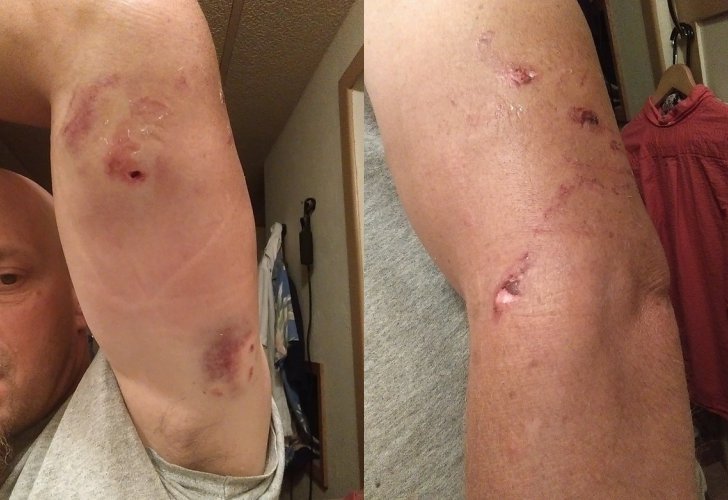 My point is that dogs do not think like us, communicate like us or behave like us. Why would we want to act like them without knowing what it means to them? It could be dangerous at the worst and confusing at the least.