16 Jokes Every Student Whose Written Anything Will Laugh At

I just think it's funny how...

1. Note to self: in order to write, you have to actually do more than stare at a Word document rereading what you’ve already written. For example, maybe typing new words would be a good strategy. literallyflashtrash

2.
thesis statement: i just think it’s funny how…
body paragraph: first of all…
conclusion: so next time you… notwifi

Me getting the relaxation I deserve after putting my name and the date on what's supposed to be a 12 page paper: pic.twitter.com/UMRzIkSxZF

"How do I cite "straight out of my ass" in MLA format?" — Michigan State University

"Okay I absolutely have to do this assignment" pic.twitter.com/mKtbR2IiQK

8. Writting an essay and getting to the 2nd paragraph cassywinchestertheangel

If tomorrow isn't the due date, today isn't the do date pic.twitter.com/tzke6o4xpY

10. me, writing academic text: these words make no sense but they sound impressive next to each other. this sentence started four lines back and has 4 commas but i haven’t reached my point yet. help me vampiregerards

Let me do this homework
*5 minutes later* pic.twitter.com/yUIOwoFi0w

12.
elementary school: remember to brainstorm then write a first draft then your final draft and don’t forget to reread and edit!
college: i just wrote that shit in 1 hour and submitted it with 2 minutes to spare what the fuck is a “draft” haylyeah 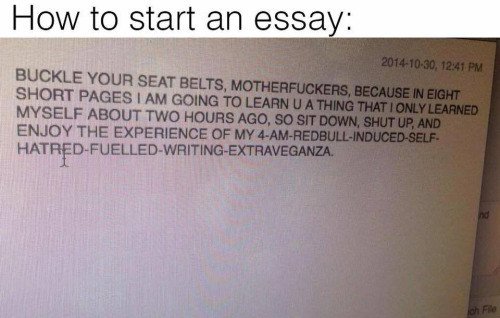 When you're writing an essay and trying to hit that 500 word count. pic.twitter.com/ydZ2hzlPrq

Desperately trying to trick myself into doing some work pic.twitter.com/NylXLm8hgm

16. when you forget theres homework due tomorrow pornstarbucks