The Cool Ways That Animals Defend Themselves

The hagfish is a living fossil, pretty much unchanged for 300 million years. That’s because there isn’t really a whole lot to change. Visually reminiscent of a lamprey (debate continues about how closely the two are related) it is basically a tube-like, primitive fish with a face only a mother could love: 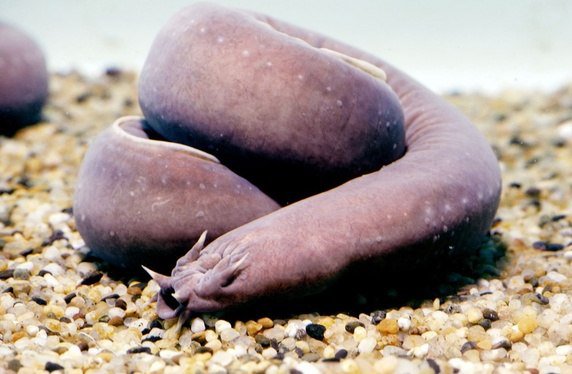 So far, so disgusting. However the hagfish has a super power that lampreys and other primitive fish lack: the power of slime.

Hagfish have one, highly effective strategy whenever they are attacked.

They can exude copious quantities of a milky and fibrous slime or mucus from some 100 glands or invaginations running along its flanks. The typical species Myxine glutinosa was named for this slime. When captured and held, e.g., by the tail, they secrete the microfibrous slime, which expands into up to 20 litres (5¼ gallons) of sticky gelatinous material when combined with water. If they remain captured, they can tie themselves in an overhand knot which works its way from the head to the tail of the animal, scraping off the slime as it goes and freeing them from their captor, as well as the slime.

The disgustingness of this slime cannot be underestimated. It clogs up gills, chokes air-breathing animals and generally just uggs the place up considerable. 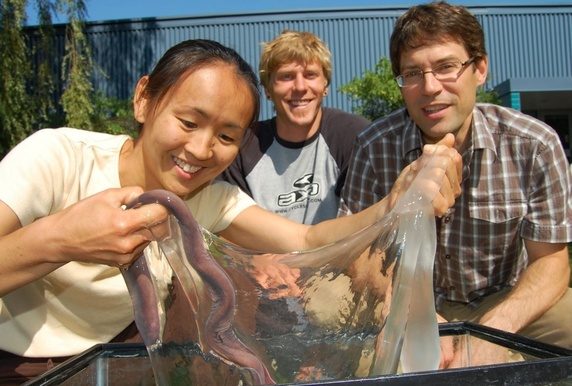 The other–the really interesting one for materials scientists–produces entirely remarkable threads. These are 6 inches long, intricately coiled into a single cell that’s just four-thousandths of an inch long. That, quite frankly, is insane. As a loose metaphor, it’s like packing 10,000 years’ worth of clothes into one suitcase that you’ll then, uh, break open and throw at something that’s attacking you.

Potentially the – presently unidentified – gluing compound contained in the slime could be used as a natural replacement for artificial polymers:

For example, Benthic Labs*, turned to the Hagfish with the ultimate goal of developing a biodegradable polymer made out of components of the slime itself. They think the slime could be used in everything from protective clothing to food packaging, bungee cords to bandages. That’s because hagfish slime threads have some impressive properties; they might be 100 times thinner than human hair, but they’re 10 times stronger than nylon.

Langur monkeys and chital (spotted deer) in India, individually with respect to each species, aren’t entirely remarkable when it comes to how they defend themselves from predators. But their being an example of two different species that learn to work together, adjust to one another, and cooperate for defense makes their behavior pretty interesting. 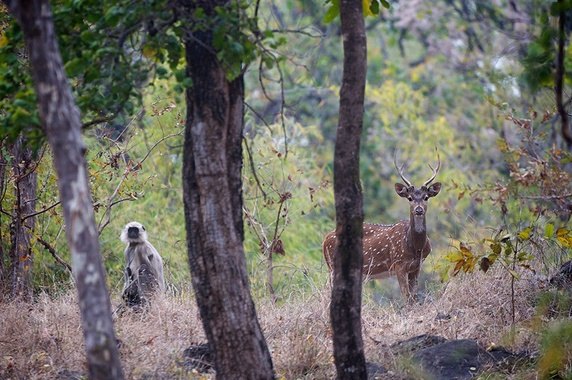 The monkeys make for excellent lookouts, able to climb high in the trees and spot predators from far away. The chital have better senses of hearing and smell, able to sense approaching predators from the ground before the monkeys (who often come down from the trees to feed alongside the deer) might. So the two species can often be found hanging out together, each benefitting from the others’ ability to detect predators. The deer know what sounds and behaviors from the monkeys signal an approaching predator, just as the monkeys know when deer sense danger. Yay, symbiosis!

How about cooking your enemy alive? 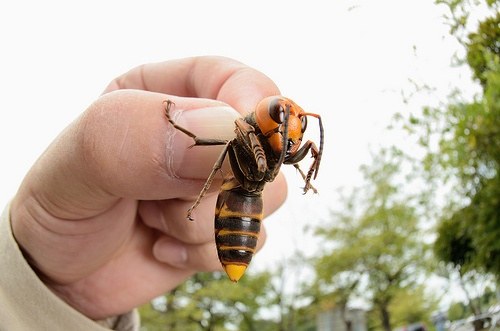 Asian giant hornets are the world’s largest hornet, growing to 2 inches in length with a wingspan of 3 inches. Their potent venom contains both a tissue destroying cytolytic peptide as well as a neurotoxin. They can fly at speeds up to 25 mph. About fifty stings is enough to kill an adult (non-allergic) human, and each year hundreds of people die from Asian giant hornet stings.

The giant hornets prey on other insects, and a few dozen giant hornets can kill off a hive of 30,000 honey bees within hours. Imported European honeybees are defenseless against the hornets; the bees sting is unable to penetrate the hornet’s exoskeleton. The hornets simply bites the bees in half one by one until they wipe out the entire hive. 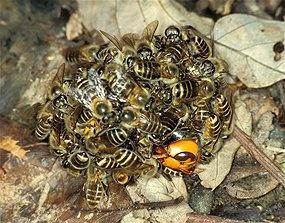 However, native Japanese honeybees have developed a defense. When one honeybee detects a hornet, she releases a pheromone commanding hundreds of her compatriots to form a ball around the hornet. They vigorously vibrate their flight muscles to heat the inside of the ball to 115 deg F. Their exertion also raises the carbon dioxide concentration inside the ball. The bees can tolerate heat at that carbon dioxide level up to 122 deg F, but hornets cannot. So the bees carefully regulate the temperature inside the ball so that it roasts the hornet but not themselves. It can take an hour inside the bee ball before the hornet is fully cooked and dead.

24 Shocking Shark Facts
9 More Crazy Weapons
What Was The Strangest Thing You Found Cleaning Out Your Parents’ House After They Died?
This product is INCREDIBLE that will cure your Hemorrhoids