Great question! We started making containers around 12,000 to 20,000 years ago. It may have been longer ago than that, but this is the earliest evidence. 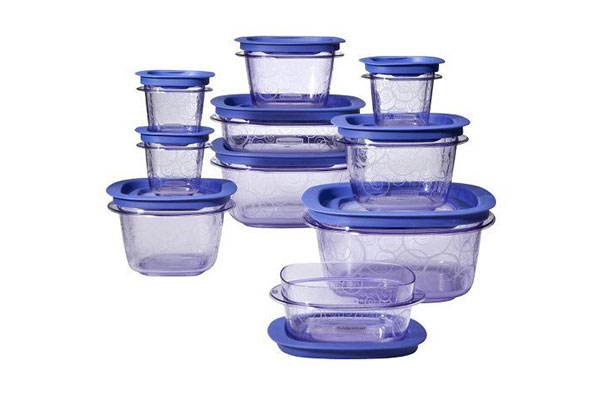 However, it is likely that we used gourds or other natural containers even earlier than that.

But my guess (and I have no evidence of this, but I suspect it is right) is that the first “container” was a baby sling.

We’ve been making clothing since before we were even fully modern humans. The earliest clothing was almost certainly pelts (evidence for sewing is only about 40,000 years old). We probably cut holes in the pelts to make them more like clothing and less like blankets. Folding your shirt in such a way as to make carrying a baby easier seems like an indispensable improvement that almost certainly came early on in the history of clothing.

Another possibility is the use of stomachs and bladders as water containers. This innovation is also extremely old: Waterskin.

Fossil evidence of this is unlikely ever to be found, but our ancient ancestors had a regular supply of stomachs and bladders – it’s pretty likely that at some point one of them had the bright idea of storing water in one for use later.

Carrying some hot coals from location to location to make fire starting much easier is also an ancient container. Using a rock with a natural depression (or one that you carved out) would work for this, and might have been done tens of thousands of years ago.