50+ Hilarious Tweets That Basically Sum Up Having Kids

4yo son said the word prototype. When I asked him what it meant, he said "People are a prototype" and I was too scared to ask what he meant.

Before I had kids, I didn't even know it was possible to destroy an entire house with a granola bar.

Apparently I pack an apple in my 5 year old's lunch so it can get out of the house for a few hours.

Hey, parents of an only child considering having one more, know that I just split an M&M in half.

My 3yo "accidentally" unspooled the entire roll of toilet paper. But don't worry, he "fixed" it. pic.twitter.com/MFKWJ2rNqi

Mom: *tastefully decorates house*
Kid: HERE ARE 20 MILK CARTONS I TAPED TOGETHER TO MAKE A SNOWMAN I EXPECT THIS TO BE PROMINENTLY DISPLAYED

Why even pick up their toys when they're gonna move out in 18 to 30 years anyway?

In case you were wondering, the loudest sound in the world is my kid screaming, "Are you pooping?!?" in a public restroom.

Hell hath no fury like a 4 year old whose sandwich has been cut into squares when he wanted triangles.

70% of parenting is just melting cheese on stuff to try and get your kids to eat it.

The other 30% is dipping it in ketchup.

There is little difference between how a horse eats hay and the way my children consume spaghetti.

Dear kids,
The 1st time was funny
The 2nd time was a recap
The 3rd was mildly agitating
…
The 493rd time is shut the hell up

Living on the edge as a parent means trying to sneak cookies while your kids are still awake.

[Puts kids to bed, pours glass of wine, settles in on the couch and turns on TV]

"Ahhh. Finally I get to watch Peppa Pig in peace.."

My favorite part of parenting is always having someone around who doesn't yet realize that I am a deeply flawed individual.

Daycare lady: *notices 3-year-old's shirt is on backward* It's cute how you let her dress herself.

When your 5yo daughter is singing, loudly "deck the halls with balls of jolly!!!" you don't correct her. You just let it go.

7yo- You worked way harder than me today, dad.

Me: I always will, lil buddy.

If you're thinking about having kids, just know that sometimes toddlers like to do finger paintings

on their bedroom wall

7 y/o daughter: "If I'm watching cartoons on the couch then wouldn't they be couchtoons cause I'm not in a car?"

I'm at my most hostage negotiator when I see my 3 year old holding a permanent marker without the lid.

Sorting laundry when you have kids:

Watching "Frozen" again with my daughter because we paid $19.99 to download it so she's going to fucking watch it every day until college.

I tucked my kids in last night and said, "See you in the morning!" and then we laughed and laughed. Saw them 16 more times before sunrise.

In case you're thinking about having a kid, my daughter just threw a tantrum because I wouldn't let her watch me poop.

4yo: I love you, Mommy. Thank you for everything.

I just asked my 8yo to quit yelling and he said, "I'm NOT yelling. This is my voice and all my life I've been whispering. Now I'm free!"

Sorry we're late. My daughter was eating each individual Cheerio like it was a mini doughnut.

My kid threatened to hold her breath until I gave her dessert. She's now passed out on the kitchen floor. I don't negotiate with terrorists.

"Can I ask you a million questions?"

Never, & I mean NEVER make eye contact with a child on the verge of falling asleep.They will sense your excitement & abort mission! #momlife

It's easy to judge the seriousness of an injury by my 4yo's refusal to accept a non-character-themed band aid. Verdict: Not Very Serious.

My 5yo just prayed to Santa to help her poop come out painlessly, and I'm wondering where else my parenting might have screwed her up.

My kid just flushed her socks down the toilet because "dirty stuff goes there."

Me: "Ask your new friend his name!"
My 3yo, leaning in way too close to new friend, whispers: "I have a skeleton at home."

It's adorable how my kids are so thrilled with themselves for sharing something with me that I paid for.

Before having a kid the most important thing to ask yourself is “Am I ready to watch the exact same cartoon on repeat for the next 4 years?”

Me: You need to stay in bed until at least 6am from now on.
*kid comes downstairs at 2am*
Kid: *shakes me awake* Daddy, what time is it?

My daughter just asked me how to spell bourbon so she's either asking Santa to hook up her old man or writing a letter to child services. 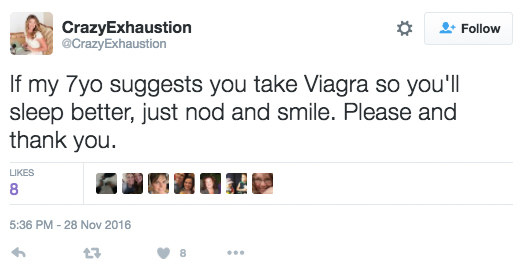 Literally Just 16 Dumb Photos That Will Make Parents Laugh A Little Too Hard
How Much Money Do You Need to Save Each Day to Become a Millionaire?
18 Of The Cutest Children’s Halloween Outfits From This Year
Guy on the far right looks like the man in the mirror from shrek﻿