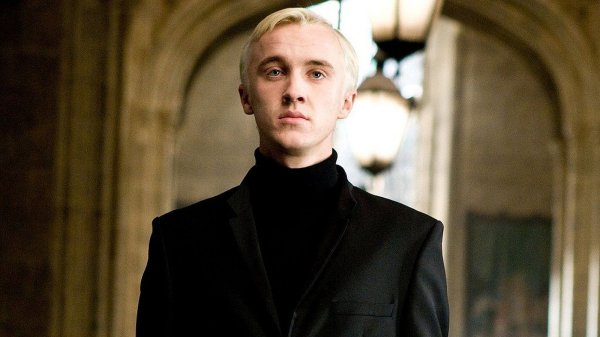 1.
what he says: scared, potter?
what he thinks: because, if you are, i’ll protect you! nobody needs to hurt my precious potter baby. he must be protected at all costs. he is mine.
s-nsetz

4.
Hermione: Draco, what have I said about comparing Ronald to the devil?
Draco: that it’s offensive to the devil
narcissiques

5.
Draco: literally fuck every gryffindor ever… you can’t trust them for shit
Draco 3 mins later: nvm he texted back
thelionstale

6.
Draco: when you said magical in bed this isn’t exactly what I was expe-
Harry: *holding up an ace of spades* is this your card
Draco: *softly* holy shit..
thelionstale

7.
Harry: Maybe I’m dreaming. Pinch me.
Draco: [pinches Harry]
Harry: Not on the arse!
Draco: Sorry. It was just right there.
potter-harreh

8.
draco: merry christmas. here, i got this for you-
harry: oh, thanks, uh
harry: um.
harry: draco, this is a framed picture of you
draco: that’s right. only the best for you, babe.
thingsdracomalfoywouldsay

9.
Ron: Hermione Jean Granger, will you marry me?
Hermione: *cries*
Hermione: yes!!
Draco: potter, I f-ing hate you and I want to spend the rest of my life hating you
Harry: are you proposing?
Draco: duh
officialheroesofolympus

11.
Draco on Christmas, Probably
Draco: Potter help, I’m trapped under the tree and the star’s tangled in my hair.
Harry: Why were you under the tree?
Draco: … Because I’m a gift to this world?
devanofficial

12.
Harry: draco youre such a bitch
Draco: fuck off potter
Later when Draco is in his dorm: im so shook he talked to me he addressed me im gonna die god bless
wheezlytwins

13.
d a d d y
draco: can you sign my hogsmeade permission slip?
harry: why me
draco: uh, cuz you my daddy
seriouslydrarry

14.
DRACO: i guess i’m just too tough to cry
BLAISE: just today you were crying about snakes
DRACO: they don’t have any arms!!
benjanstark

15.
Harry: They say that when you kiss someone for one minute, you burn 2.6 calories. Wanna burn some calories with me, Draco?
Draco: Are you trying to say I’m fat?
Harry:
smittenwithdaydreams

16.
draco making sure that he reads every letter that scorpius sends him and replies as fast as he can
scorpius’ father hears about everything
accio-shitpost

18.
Draco: Potter, truth or dare?
Harry: Dare.
Draco: Okay, I dare you to kiss the prettiest girl in the room. And notice I charitably said “girl” and not “person” because let’s face it, I’d smoke all of you.
devanofficial

19.
in the future at some point
draco: *holding his son on his lap* you see, i won your daddy over by being nice to him and showering him with love and affection. of course, as soon as i asked him out, he said yes. harry: draco, you tried to kill me multiple times and basically stalked me the entire time we were at hogwarts…
draco: *shushing harry* he doesn’t need to know that part.
all-thedrarry-feels

20.
Draco: (pretending to be Santa) Hohoho~ what do you want for Christmas
Blaise: A unicorn
Draco: Be fucking realistic
Blaise: Ah, then Hermione Granger
Draco: What color do you want your fucking unicorn to be
dramione-as-fck