20 Things Tumblr Has Thought About The Weasley Family 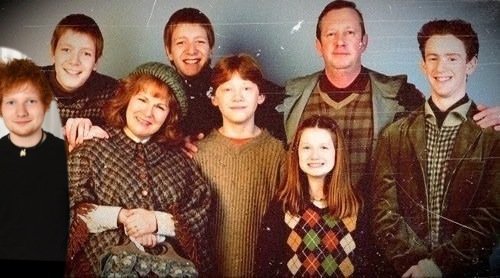 2.
molly weasley looks in the mirror of erised
she sees her family helping around the house for a fucking change
accio-shitpost

3.
IS NO ONE GOING TO TALK ABT THE FACT THAT DORA SHARED A YEAR WITH HARRY, TWO YEARS WITH THE WEASLEY TWINS, FIVE YEARS WITH PERCY, AND SIX YEARS WITH BILL
why was this never mentioned in the books i bet this was fun
ix-mmi

4.
do u ever just think about the fact that molly weasley saw HARRY POTTER, the boy who defeated voldemort, and went “i’m gonna knit this kid a christmas sweater”
jasico

5.
why did molly weasley have kids named bill, charlie, percy, fred, george and ronald and then call her last one ginevra
accio-shitpost

6.
headcanon that the only reason lee jordan remains quidditch commentator despite getting told off for unnecessary comments during every match is that he’s the only candidate who can tell the gryffindor beaters apart
sapphireswimming

7.
when do i get fanart of fleur weasley in her wedding dress just punching a death eater in the face because how fucking dare he ruin her wedding who the fuck does he think he is
pidgishly

8.
imagine molly weasley staying up late a few days before christmas trying to finish knitting sweaters for all her children, her children’s spouses, and her children’s children and arthur tells her she won’t be able to finish in time
and molly slowly turns around and whispers “just you fucking watch me”
thefutureauthor

10.
fred and george weasley would have the best vine account though
accio-shitpost

11.
always remember: it doesn’t matter how good you are as a knitter nor how long you’ve been knitting nor how many times you’ve had to start a project over, molly weasley would be very proud of you and your handmade knits
faserkind

12.
Arthur Weasley would be so enthralled with Christmas lights. I mean, they glow and some of them sparkle and look at the muggles being so festive it’s amazing what they can do without magic. Harry, Harry, it runs on eletracity, doesn’t it?
nekobemura

13.
No one can convince me that Ginny wouldn’t be that parent that when her kid got in trouble for cursing at school she’d turn to them and just go “what the fuck kid”.
bisexualdinahlance

14.
this year, aspire to be as Extra as fred and george leaving hogwarts
accio-shitpost

15.
ok so Ron says he doesn’t like spiders because when he was 3 the twins turned his teddy bear into a spider right? the twins are only 2 years older than Ron, which means they were FIVE YEARS OLD when they did this and I’m just??????? like they were five and they didn’t even have WANDS and they managed to deliberately turn a bear into a spider???? even if they managed to steal a wand from their siblings or parents that’s a really tricky bit of transfiguration and at age five most kids are just doing uncontrolled magic….. like TBH in my opinion Fred and George had more innate talent than the trio combined but they just wanted to chill and do pranks and I respect tf out of that
100-LBS-OF-SALT

16.
How Percy Weasley’s growth as a character is shown by one word.
Prisoner of Azkaban
“Why are the Ministry providing cars, Father?” Percy asked again, in a dignified voice.
Goblet of Fire
“I’ll come with you Father,” said Percy importantly.
Order of the Phoenix
From Percy’s letter to Ron post family rupture:
“As you must be aware, given our father escorted him to court…”
Deathly Hallows
“I’m sorry, Dad.”
cerellelannister

19.
pureblood families name all their kids after stars like pretentious pricks and then there’s the weasleys who just sort of went ‘uh…fred’
accio-shitpost

The Ultimate Guide to Food on Dating
Experiences Are Better Than Things
The Dodo is Dead, Long Live the Dodo!
18 Companies That Are Making The World A Better Place