25 Celebrity Tweets You Missed From The Oscars

Not going to the Oscars tonight because I'm Natalie Portman's doula

Viola Davis' speech, I'm trying to speak thru my tears and that wasn't even the movie

Does Alicia Vikander have a Twitter because I will def give her a back rub tomorrow pic.twitter.com/qD5Mxs4acy

Can we check Best Actor again

.@Lin_Manuel …to have a great time tonight (and maybe bring home a statue) pic.twitter.com/OEBANGjTjR

This is the most beautiful shit I've ever seen. #Oscars pic.twitter.com/YtLctuyrkY

I started crying when he fixed his hair outside the car in Moonlight and cried the rest of the movie and I'm still crying.

Getting slapped by a blue flag while singing on the oscars keeps one humble.

I wrote the ending of the academy awards 2017. @jimmykimmel we really got them!

VIOLA NEEDS TO RELEASE A DVD OF ALL HER SPEECHES

Taraji you a fox

.@SethRogen Honestly, what did you say to @realmikefox in the DeLorean? Did you mention the flux capacitor? Did he like the future shoes?

Oh hi Dev Patel's mom, I see you and you are the worlds cutest person

I want to thank everyone from the parts department to the folks on the assembly line for putting this package together. #Oscars pic.twitter.com/9Ijlv1Q9ks 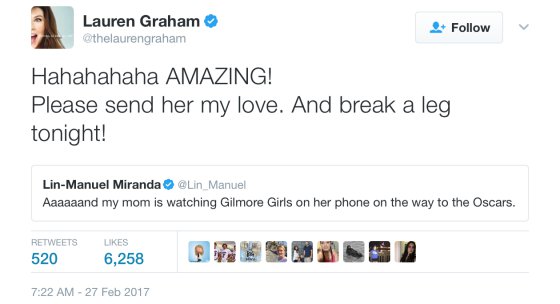 I think this Oscars is the most confusing movie ever made

What The Color Of Your Urine Says About Your Health And Hydration
28 “Hannah Montana” Secrets You Never Knew
What Events Happened on January 14 in History?
22 Tweets For Women Who Are Just So Done With Bullshit