30 Times Chrissy Teigen Was Too Funny For Twitter To Handle

Chrissy Teigen may currently be making headlines for falling asleep at the Oscars on Sunday night, but that's not the only hilarious thing she's known for. She is also the unofficial Queen of Twitter, with 4.47k loyal subjects hanging off her every golden tweet.

Chrissy Teigen may currently be making headlines for falling asleep at the Oscars on Sunday night, but that’s not the only hilarious thing she’s known for. She is also the unofficial Queen of Twitter, with 4.47k loyal subjects hanging off her every golden tweet.

The 31-year-old star is a model, mom, wife to singer John Legend, and cooking show personality (just to name a few of her many talents), yet somehow still finds the time to entertain fans with humorous insights – and burn haters with savage comebacks.

John when you tell him he looks like Arthur pic.twitter.com/0NW3NDtAb1 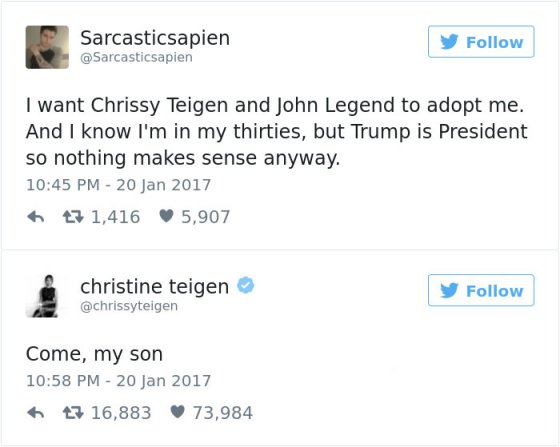 Basketball commentator said "One guy. Two guys. Three guys!" And I said "ugh that's my dream" and john ignored me per usual 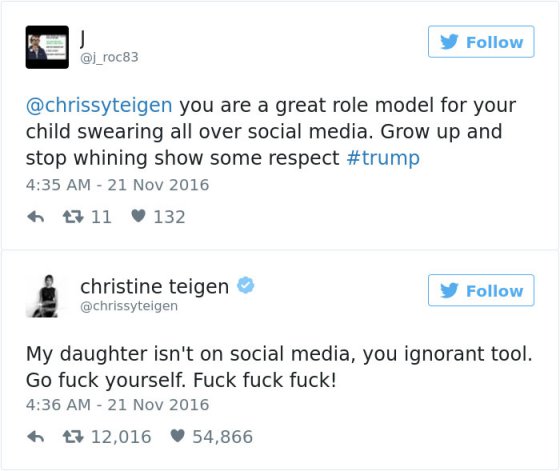 When your husband is in Paris but you gotta get your Santa on pic.twitter.com/mZLhUeadPS

Nothing I could say will piss him off more than the fact I have a black/asian/white baby. Life is grand.

Your excuse for shooting an unarmed black therapist is that you meant to shoot the autistic guy with the toy truck? Holy shit. 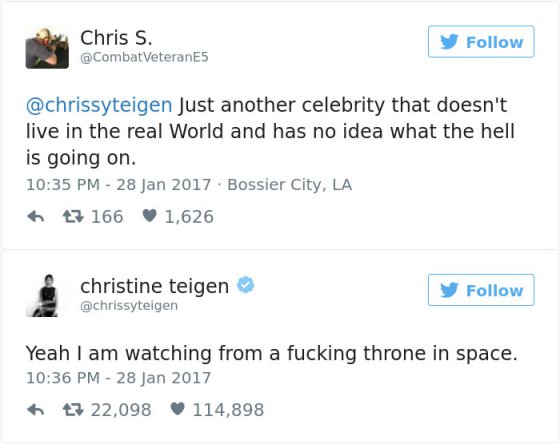 Have u ever seen a more epic feud pic.twitter.com/LDitpCeaq7

@realDonaldTrump that is what happens when your staff hates you. Beyonce's staff are more leakproof than yours. 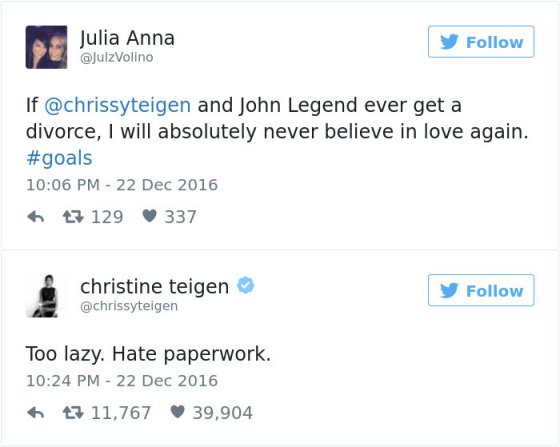 I have not put my phone down once today. My hand, it aches. My eyes, dry. My pettiness…my pettiness has somehow maintained its strength

i have not had a sunday this lazy in a long, long time. my body has become the same texture and temperature as this couch. we are one.

Hate this macbook relationship. "When do you want to update?" "Later" "later today or later tomorrow?" Oh my god just fucking LATER

A paparazzo just dropped off some prints for us at our hotel. very weird but also very kind. Thank u, anon photog! pic.twitter.com/m9nhkoFDim

my newborn just looked up at me and said "mommy, why is piers morgan so unequivocally douchy?" i didn't know what to say