You vs the guy she tells you not to worry about pic.twitter.com/IPfSEFYKip

as if the school uploaded a pic of me writin with a cheese string pic.twitter.com/t8KPc73pDj

The North/South divide is illustrated best by Waitrose pic.twitter.com/mFkeqa6SW1

my dad has just taken dad jokes to a whole new level pic.twitter.com/S7pklb4EhX

What a wanker I'd lob a nugget at him pic.twitter.com/bQggnu3y4D

My parents have brought over wine in a plastic box because Mum is "increasingly wary of glass". pic.twitter.com/QSf2zeq94X

I'm literally having KFC why my mum arranged it like she Gordon Ramsay pic.twitter.com/7MC49bPVgX

often think about this moment from my parents wedding video where the cameraman just zoomed in on a plate of ham pic.twitter.com/ariepazNFN

what fat gimp in ma fuckin family did this pic.twitter.com/HNaDwkDpmw

Who needs 10,000 characters when Twitter produces this gold in 140? pic.twitter.com/Kw3c5ILlKF

Am fucking embarrassed to call this thing my pal pic.twitter.com/wSntlpZvPY

They've made all the Roses the same shape. And I'm colourblind. Worst year ever. pic.twitter.com/af6FyvHduH

I've just had a great idea for a children's book. pic.twitter.com/N2AmIwQVby

How can my mum go to nandos & fill up a whole water bottle of hot sauce pic.twitter.com/6v56bPvSBa

The new Toblerone makes for a nice device stand pic.twitter.com/T1okTEo9fP

FaceTiming my oven so I can see when my garlic bread is done. pic.twitter.com/r3d3znrMJ3

Why are there biscuits in the sewing kit tin? pic.twitter.com/Mx7RozoMbF

Imagine coming to wetherspoons dressed as one of the plates… pic.twitter.com/XzCw4EYSLz

he meant croissants am PISHING pic.twitter.com/jD0OTEca4h

Just ordered a milkshake and this fucking turned up wit the actual fuck am a meant to do with that pic.twitter.com/jK0RxdEenx

It's at Christmas time that we think about our loved ones and those that aren't with us anymore, RIP, gone but never forgotten pic.twitter.com/BKn0B0COVi

this review someone left on just eat pic.twitter.com/FhqLDnsGlE 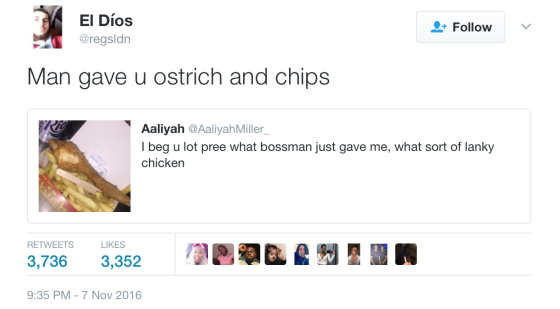 No Scottish shortbread for you little man! pic.twitter.com/MKQzPLo3Qj

Ordered takeaway at 4am and then fell asleep. Just found this on the front of my house. pic.twitter.com/GEpJosTW2z