Is It True That Astronauts Can Not Cry In Space?

Yes, but you have to wipe away the tears, because they won’t flow downwards, away from the eyes. They just pool, obscuring vision.

We have had astronauts/cosmonauts lose loved ones, while they were in space, and they have talked about this.

I cried in space several times… due to some very emotional circumstances. I speak of several of these situations in my upcoming book. (Look for it in the spring of 2015.) Crying is exactly the same as here on Earth, except the tears don’t fall down as there is no gravity. Not a big deal at all… the emotions I experienced however, were a big deal. Some due to personal events and some due to circumstances inflicted upon my family by folks at NASA…

It is possible, yet not recommended. In 2011, American astronaut Andrew Feustel got a flake of anti-fogging solution in his eye, five hours into a seven-hour spacewalk. Although he managed to rub his eye against a sponge inside his helmet (normally used to plug an astronaut’s nose, during pressure readjustment), the experience illuminated a happenstance scientific discovery.

Crying, although possible, is not recommended because it actually causes physical discomfort. Tears well up in the eyeball, unable to drop because of the lack of gravity; the resulting moisture remains stuck.

How do astronauts scratch their nose in their spacesuits?

There isn’t much they can do.

There is a little pad at the front of the mask that is called a valsalva device. It is intended for them to use to block their nostrils so they can clear their ears, but they can use it to scratch the tip of their nose and a little bit of their cheeks if needed. 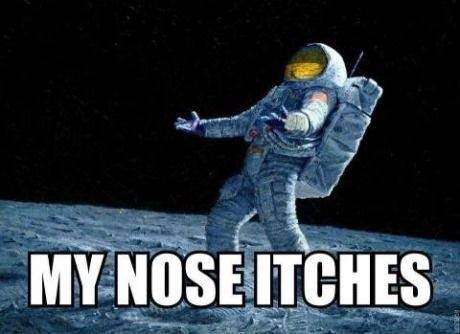 There is nothing they can do if they get tears or sweat in their eyes. Without gravity, things don’t flow down, so sweat usually just stays wherever it was excreted. But tears can be a problem, if something irritates their eyes.

They just have to bear with it.

24 Shocking Shark Facts
50 Fun Facts About Chickens
How Much Did the United States Buy Alaska in 1867 For?
What is National Animal of Israel?