The Strangest Thing That Happened In Japan

Taxis in Japan. The taxis are spotless and very clean. The drivers are all clean and well dressed. At taxi stops the drivers take out a cloth and clean their cars.

In Kyoto, we were lost walking to the Golden Pavilion Temple. This was before Googlemaps and we’d made a wrong turn among streets that were narrow switchbacks. It was uphill. We were hot, tired and thirsty.

A taxi was stopped at a corner and I asked the driver for directions while showing him a photo of the temple from my guidebook. He started to tell me with gestures but I didn’t speak Japanese and he barely spoke English. So he just motioned all of us to get into the taxi and drove us to the entrance of the temple. Then he opened the doors, ushered us to the entrance and wouldn’t permit us to pay him. 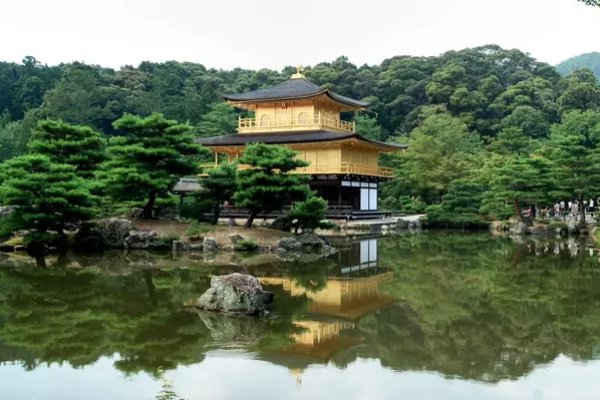 On another trip to Kyoto, I’d gotten into a taxi and after saying my destination, I was motioned by the driver to get out and cross the street to take a cab going the other way. That made my ride less expensive because my destination was in the other direction.

In Osaka, I used to take the monorail home from university later in the evenings. 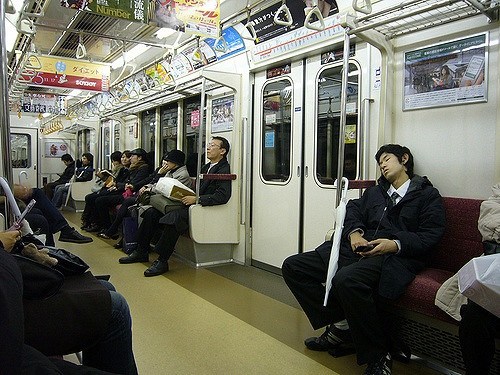 They always looked a lot like this. Every night, exhausted workers commuting home late either from the office or drinking with colleagues. Very quiet.

This particular night, two younger working men hopped on the train. They were deep in discussion, but my Japanese wasn’t at the point to understand exactly what about. They were arguing about something. Something felt off about the way they were speaking, I could tell that much.

It happened out of nowhere. I was watching them in the glass reflection. The considerably heavier man slowly turns to face his ‘friend’ with visible rage, and lunges at him. He seized him by the collar, both hands. He was basically on top of him, pinning him hard against the seat.

What shocked me at this point is that no one reacts. Everyone close by merely shifts seats and averts their gaze. There’s only one other older man that stands and softly asks them to stop. Not helping.

So I step in, unable to use words but instead getting up from the other side of the carriage, trying to pull the bigger guy off. He was just too… big. Somehow I did make things clearly awkward, and they stopped. The bigger guy made some mega-rude remarks and attempted one last roundhouse kick at his friend(?), getting off at the next station.

And the few standing sat down again, like nothing had happened.

Public incidents like these were rare, but the response was always the same.

During my first trip to Japan with my wife, I had the pleasure of experiencing the evening rush-hour at Shibuya station.

My wife is half Japanese and warned me beforehand that it was going to be “kinda special”. And I had seen pictures of the rush-hour before, some like these: 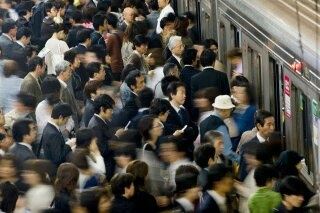 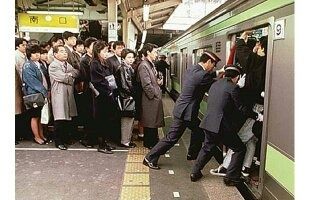 So I thought I was mentally prepared for it, which turned out… NOT to be true. The physical experience is truly special. Compared to Japanese I’m rather tall (178 cm), and despite being a hockey player in his physical prime at that time, I was really suffering. I had to flex my entire upper body muscles not to be crushed by the mass of bodies around me.

So there I was, together with hundreds of other sardines in this can on rails. After some time like this, you can’t feel your own body anymore and I couldn’t think straight anymore because of this strange sensation. Occasionally you could hear moans from other passengers being crushed by their neighbours.

And directly in front of me was a man about the same height as myself, with his back to me.

But something didn’t feel quite right, his back felt strange on my chest, like he was wearing a small but hard packed backpack under his jacket.

As I couldn’t see any straps on his shoulders, my first thoughts were “why the heck is he wearing a backpack under his jacket; and what is in it, a bowling ball???”

So I looked down to check it out… and there was this very little woman, wedged between this guy and myself. She was facing me and her face was on my chest. I couldn’t see her face and I thought she must be in distress and pain, wedged between me and that man.

So I said “I’m sorry” in Japanese but got no reaction from her at all. I really started to worry as she couldn’t move even a bit. She didn’t moan and I thought she might even have been already suffocated or was at least unconscious. I tried to move my head to see her face, but simply couldn’t, constrained as I was.

As the next stop came up and people started exiting the train, the man in front started to move away from us and I was prepared to hold her in case she dropped.

As the man had moved and the pressure around us subsided, she was still standing there, her face firmly pressed to my chest!!!

Finally I could bend my head sideways and look down at her face. She was smiling, but her eyes were closed – “SLEEPING!”

Realising this absurd situation I could do nothing but burst out laughing! Not in a loud way, but my body was shaking with laughter. And this woke her up.

She then first turned her head sideways to check the station we were in, and as if nothing had happened looked up to me, gave me a lovely smile, winked at me, turned graciously on her heels and left the train!

How Many Ants Live on Earth?
The Weirdest Memory
Death of a Loved One Raises Heart Attack Risk
Machine Head – Locust