22 Tweets You’ll Want To Send To Your Boyfriend Immediately

1. When you think about how your relationship changes over time.

When you first started talking vs now pic.twitter.com/nsh786WXm1

3. When you can’t decide where to eat.

my boyfriend asked me what i wanted to eat & i said i don't know & this what he brings me. pic.twitter.com/JQcMQvloED

4. Although this betrayal is even more frustrating. 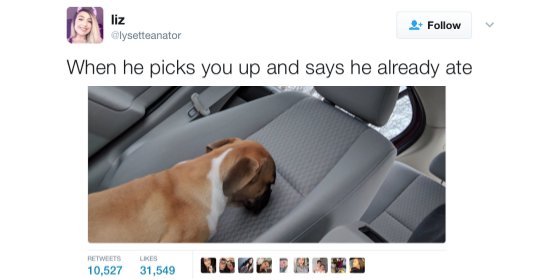 5. When you compare your expectations with reality.

How I want my boyfriend to take pictures of me vs. what he actually takes pic.twitter.com/vvOkSp2lRp

6. When you want to let things go but just can’t.

Me: he apologized. I should just say okay & let it go.

Other me: bring up that thing that pissed you off 3 weeks ago too. Finish him. pic.twitter.com/21Q06Qhxr4

7. When you get to brag about them.

Me when I get an opportunity to talk about my boyfriend pic.twitter.com/GlWTOs8Vli

8. When you admit you’re good at dishing it out.

When I'm cursing him out vs when he slightly raises his voice at me pic.twitter.com/CnnSVEhGIw

This the look your girl gives you every time a guy does something romantic on tv pic.twitter.com/snw32r1fQO

Don't think he got the hint tbh pic.twitter.com/Ew6x14O7o9

11. When you face this rejection.

When he stops cuddling u & sleeps facing the other way pic.twitter.com/cKUAh9qux8

12. When you accidentally ruin his clothes.

when u hug ur boyfriend and get makeup on his shirt and u waitin for him to notice pic.twitter.com/8vrhmh7lri

13. When this keeps happening.

14. When you know that acknowledging your flaws is one thing, but hearing about them is another.

15. When they’re being sweet to you and it makes you…suspicious.

when ur man all of the sudden acting all cute & shit & u start thinkin bout what his stupid ass did now pic.twitter.com/18tRKizOaL

16. Or makes you downright emotional.

When he usually just calls you uglass fuckin noodle head but then randomly says something affectionate pic.twitter.com/xjxQKQUrvn

17. When you refuse to hear a bad word against them.

18. When you experience this anxiety.

19. And when this happens as you were about to explain everything.

When he says "ok fuck it" to the 123rd time you said "nothing's wrong" when u were going to tell him what's actually wrong on the 127th time pic.twitter.com/1CdnBb4MIS

20. When you tell him all of your gossip.

When you tell your mans all the tea cause he your best friend too pic.twitter.com/emSgRRWPdS

when u hear ur phone vibrate and u check it and it's a new message from the person u love and care about and want to talk all the time pic.twitter.com/mS1xgPBX0J

22. But if they ever move on, that’s another story.