17 Posts That Are Actually You As A Girlfriend

1. When mush is not for you

Me, as a girlfriend, trying to be cute, then giving up pic.twitter.com/JCq0u9Vowb

2. When you can’t make decisions

My dad made this for when his girlfriend won't pick a restaurant pic.twitter.com/cZ4tWQDHYZ

3. When this is your idea of dirty talk
Me flirting: You wanna watch lord of the rings:*seductive voice*extended edition
youtrickyminx

4. When you take being competitive to the next level

My girlfriend and I were waiting each other out on who would but the new tooth paste. I thought I had won until I came home to this pic.twitter.com/rRTv1PxpE3

5. When you know what you want

When you open a snack and your girlfriend suddenly starts paying attention… pic.twitter.com/fM6hTGMJAy

6. When you give personalised, heartfelt gifts

isn't my boyfriend the luckiest boy ever, I even paid to fill the mug with sweets pic.twitter.com/t6zIJTkcXY

me as a girlfriend and im not even ashamed of myself pic.twitter.com/EwRf3KreNF

8. When you need validation
Me on my wedding day: you still like me right
greyglimpses

New boyfriend is allergic to kitten so can't keep him :( He's ginger & named Tom. Friendly. Comes when called. 28yrs-old & works in IT.

10. And when you ask important questions 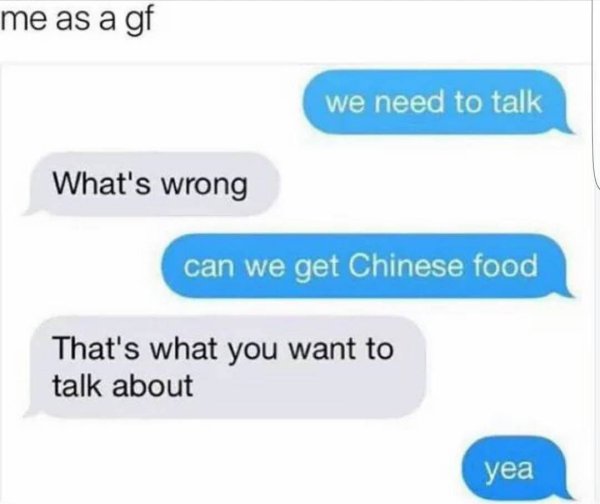 11. When you aren’t known for your patience

12. When you provide insight and stimulating conversation
My girlfriend: *studiously doing her accounting homework, listening to instrumental music, very focused*
Me: *upside down in my desk chair* do you think stars have feelings
thebootydiaries

13. When you want love and affection

When u send bae a selfie and he just send one back without any heart eyes or kissy faces pic.twitter.com/ZjvxvWuh7j

15. When you go out of your way to fulfil their requests

Asked my gf to buy me a 2-pack of socks and she came back with these wtf pic.twitter.com/94rPig06hO

16. When you have your priorities straight

She literally comes over just to sleep in my bed pic.twitter.com/1w2pCXisZe

17. And when you’re kinda just making it up as you go