17 Celebrity Tweets You Missed This Week

but do i really love anything more than hummus

Any tips for getting rubber cement out of your hair? Also, making movies is…… never boring.

But honestly, any tips?

I stayed up very late, but I'm done with season one of Gilmore Girls, so. #priorities pic.twitter.com/FaIDEJjRtH

7. Cole Sprouse was confused for his twin—again.

@colesprouse to all of you who think that's Dylan's face and ~I~ can't tell the difference between my own damn twin, sit the hell down. Pic: pic.twitter.com/7oMS2gg18c

9. The Bellas went swimming on set for Pitch Perfect 3.

Bellas Overboard!!! #nightswimmimg what on earth is happening in #pitchperfect3 !!?? pic.twitter.com/b6wsDnrhlC

….that time I thought I was nailing it #GlamourShotChallenge pic.twitter.com/ItEgX4bkdm

11. Sabrina Carpenter did a magical cover of Lorde’s new track.

Resisting the urge to buy the Duncan yo-yo I couldn't afford in middle school.

Happy paddys days to all the lovely Irish people all over the world and anyone else who wants to join us .

14. Viola Davis passed along some wisdom. 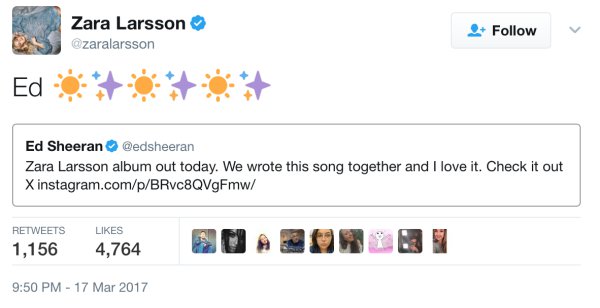 I will have full, hour long conversations with my dog but refuse to read even a page of a user manual

17. And Chrissy Teigen invited some animals over for a dinner party.

I am having a petting zoo slash crab boil dinner party today and no one is really questioning it. I love my pals

You Don’t Know It Yet, But You Need To See These 19 Tumblr Posts About Chickens
In a job interview, how to answer “What’s your biggest weakness?”
18 Texts That Prove Boyfriends Are The Weirdest Humans Alive
Side By Side Comparisons Of The Real Chernobyl Vs. The HBO Version Of It