30 Of The Daddest Dad Jokes That Dads Have Ever Made

The most recent hashtag? #MarchDadness.Just yesterday Jimmy Fallon asked his Twitter followers to tweet “the best/corniest “dad joke” your dad or someone else’s dad has said”, and there are already a bunch of responses.

1.
One time my dad walked up to a Samsung security guard and asked, “Are you guardian of the galaxy?
@mollyligonn

2.
Every time the doorbell rang my dad would yell, “Everybody, act normal!” Loud enough for the person outside to hear it.
@TerraCollinsWC

3.
One time, his fortune cookie told him to embrace his mistakes. Next thing I know, he leans over and hugs me.
@peytonism

4.
The secret service doesn’t yell “get down!” when the president is in danger. Now they yell “Donald, duck!”
@Delliott78

5.
Dad broke his wrist, asked nurse if he’ll be able to play piano. When she said yes, he said “Great! I couldn’t play before!”
@1flakeofSnow

6.
When I said to my father that I was old enough to drive he said: “Yes but the car is not.”
@amazingmaze17

7.
My dad bought me a condom when I turned 18. The cashier asked if we needed a bag, my dad replied, “No, she isn’t that ugly.”
@adrunkteacher

8.
Every time we pass by the cemetery my dad says “people are dying to get in there!”
@JohnKMich

9.
Recently got a job at Dick’s Sporting Goods as a cashier. My dad has been calling me a Dick checker ever since.
@HipHipJorge36

10.
My dad signs most of his texts “love, YAD.” For years I thought it was a typo, turns out it means “your awesome dad”
@maggie_may93

11.
My friend’s dad said “What happens when you mix a joke with a rhetorical question?” then left the room. Best one I’ve heard.
@giorginam94

12.
My dad owns both an IPad and an IPad mini he refers to them as his mini pad and his maxi pad.
@tvbleek

13.
Just asked my dad for his best dad joke… his response?
“You”
@meg_mcdonald_

14.
Every time a bug hit the windshield my dad would say “he’ll never have the guts to do that again”. Every time.
@KathyLovesCubs

17.
Badass Dad used to pretend to be asleep, then shout “Still alive!” at the nurses checking in on him (he had a heart condition)
@tweets_by_tanja

18.
Once I said, “Dad, I’ve been thinking…” to which he replied, “I thought I smelled something burning.”
@TheShangriLlama

19.
When the cashier at the grocery store asks my dad if he would like the milk in a bag he says,’No, just leave it in the carton!”
@ricky_reyes35

20.
Every time we drive past a gas station, my dad says “Excuse me, I just passed gas”
@emmylouwho22

21.
When I was a kid and I would ask my dad to make me a sandwich he would say “Poof! You’re a sandwich”
@beehannahbee

22.
“Go ask your brother what happened when he did that!” But we don’t have a brother? “Exactly!”
@SandysValley

24.
My aunt would ask dad at breakfast how he slept, he often replied “with my eyes closed” & it always made her mad
@lindag1110

25.
On road trips, Dad would point at ever cow we drove by & tell my baby sister they were bunnies. This went on until she was 7.
@Sasssshole

26.
In high school, if a friend called the house and asked if I was there, my dad would say yes and hang up on them!
@kpjem

29.
When someone asks “guess who I saw today!?” My dad says “everybody you looked at??”
@Rizzeroni

30.
Being in nursing school has created a whole new monster 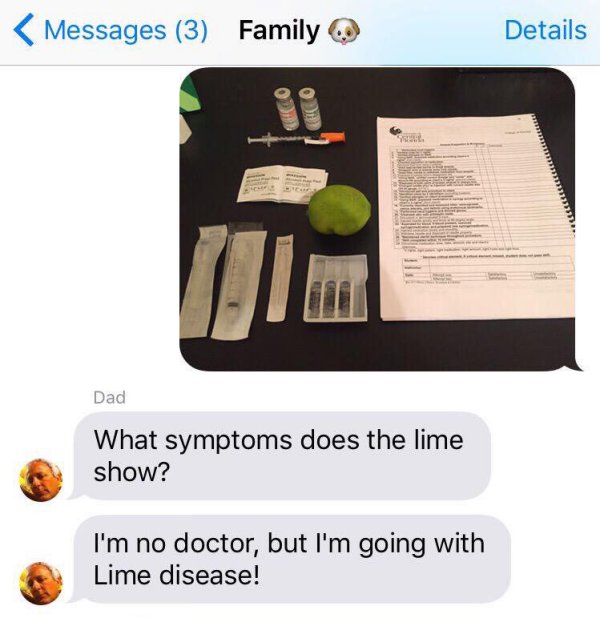 Can Alcohol Cause Memory Loss?
What Events Happened on January 23 in History?
16 Moms Who Have Never Censored Themselves And Aren’t Gonna Start Now
Hosting the Olympics is a Terrible Investment