17 Hilarious Tweets Anyone Who Is Never On Time Will Understand

1. When your alarm betrays you

When you had set 20 alarms but didn't hear any of them.

2. When you’re already late, but can’t leave ‘cause you lost something you need

When you're running late and you can't find your earphones pic.twitter.com/iBRtWs43z6

3. When your snooze button betrays you

When you thought you hit snooze but you turned the alarm off and you wake up 3 hours later pic.twitter.com/1rIMxN1wiQ

4. When waking up early still doesn’t prevent you from being late

5. When you have some inconsistencies in your alibi

everyone: why were you late
me: wow traffic was insane I am literally so sorry
also me: pic.twitter.com/a6J0CAKhr2

6. When you thought you had more time to get ready

friends: I'm on my way
Me: okay, let me know when you're here
…
Friend: here

7. When you’re hungry and running behind

When your running late for work but still gotta eat breakfast… pic.twitter.com/PKbELIcVz9

8. When you betray yourself

When you hit snooze 32 times, and now you're 4hrs late for work… pic.twitter.com/cmpKYilzSj

9. When you’re the reason everyone is late 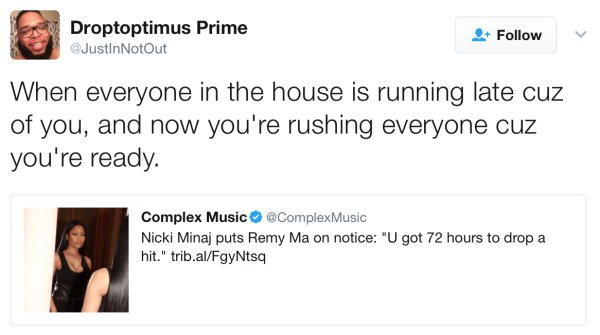 10. When you’ve learned that rushing isn’t going to make things any better

friends: we're here where are you
me: I'm on my way
me: pic.twitter.com/rdbIFUBTU8

11. When the universe does everything in it’s power to work against you…

12. …and the few and far between moments when it works in your favor

When you're running late to class and forgot your jacket but the homies got your back pic.twitter.com/qbWXqnJab5

13. Or when your friends show up and you don’t really have a choice but to hurry

When you said you'd be ready at 6 and it's 7:30 and they're here pic.twitter.com/oGT9gWJJNH

14. When the world slows down, but time still doesn’t

does everything take 10 times longer when you're running late or is that just me?

15. When you have to play catch up because everyone’s already drunk

When you get to the party late and all your friends are already turnt & you’re tryin to catch up pic.twitter.com/dvEQJgnSD2

16. When you actually have a valid excuse for your tardiness

17. And when you’re obviously not ready

friend: ill be there in 5 mins! U ready?
Me: pic.twitter.com/Q8kNR8PfW0

The Sims Soundtrack
What is Christopher Columbus’ Real Name?
16 Tweets About Parenting Advice That Are Hilarious If You Have Kids
Floppy Nyan Cat