You love your S.O. and they’re your whole world but that doesn’t mean they’re not annoying as fuck.

me: i hate when people clingy in relationships ew
also me to my bf or anyone i have a crush on: pic.twitter.com/5cYFIGKWXc

when you scrolling down your timeline and you see bae pic.twitter.com/tLzpezuPso

him: "i wanna pick you up at 3 am and go an adventure and watch the sunrise with you"

when you been with bae all day and he leaves pic.twitter.com/68mlq4JkDF

how you look on FaceTime when you first start dating vs when you've been dating a while pic.twitter.com/25Lx1bQlyI

When he realizes he cant handle a crazy girl like u but it's too late cause u already own his soul pic.twitter.com/UxnbZG4hV2

when he asks if you're mad and you say no and he believes you pic.twitter.com/NSV1J3T0rI

when bae says "be there in 5 minutes" but its been 5 minutes and 42 seconds pic.twitter.com/24rrOe6Bjn

when your man makes a valid point during an argument pic.twitter.com/wz3YzaQ3S9

*during an argument*
Me: he's actually making some good points
Me to me: cry so u can win pic.twitter.com/IE3P2rVxCz

me: roasts my boyfriend literally everyday

When your girl complains about all the small stuff but u still gotta fix it pic.twitter.com/rkIL1ky8A1

when he says "sorry" but u had more arguing in you pic.twitter.com/48VY26POod 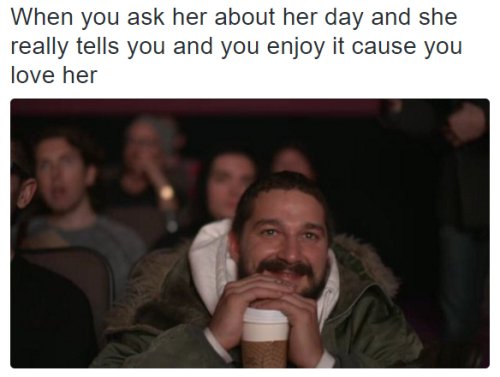 when you get a text from ya boo and realize how happy they make you and how lucky you are to have em pic.twitter.com/melCUrlPfs

when you know they're genuinely busy but you can't help but be mad that they're not giving you attention pic.twitter.com/v3MDvnunjd