22 Memes You Should Send To Your Co-Worker Right Now

No, I do not want to put in money for Susan’s birthday gift.

Me: I better leave, I'm going to be late

Inner me: The later you are, the less time you gotta be there pic.twitter.com/yDxkuA4NWf

When you're getting along with your coworker then they take it too far & hit the "we should hangout outside of work" pic.twitter.com/pmJf8i48Gs

Interviewer: why should we hire you?

Me: because your hiring pic.twitter.com/WlJC8QxD9Y

When they ask you to show the new employee around. pic.twitter.com/PI6DYhmZdx

Walking to the door of my job and wondering if I should just leave and never come back pic.twitter.com/WeK5ORnUnK

Interviewer: Are you willing to work nights and weekends including holidays
You: Sure…… pic.twitter.com/VV9pdX1Vpa

when your boss comes around the corner and you grab the closest thing to you to make it look like you're working pic.twitter.com/utVJvtiskO

interviewer: so tell me a few reasons why u want this job

My coworkers: "didn't know u were this shady!"
Me: pic.twitter.com/C7MZfXbb56

When you clock in at 9, work for 7 hours & then realize it’s only 9:30 pic.twitter.com/tzZuDOfnk8 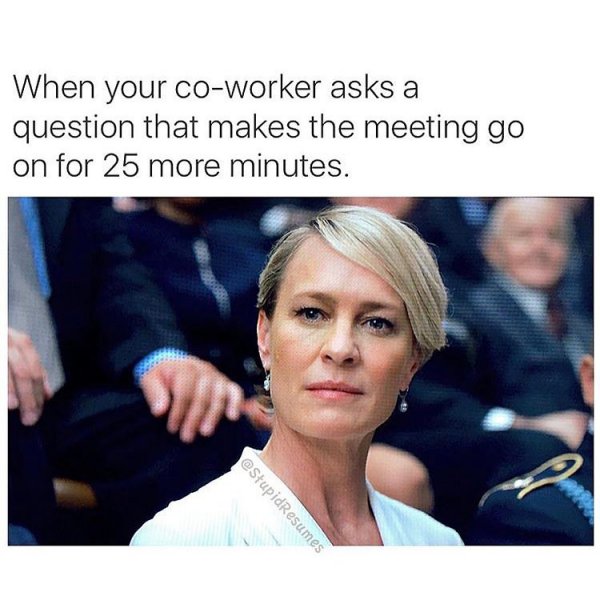 When you fart at work & a coworker comes over to talk to you pic.twitter.com/vt1HHY19CF

manager: you can't use your phone at work
me: pic.twitter.com/Vznu46QgbA

Coworker: It's Susan's birthday! We are all putting in $5 to get her a gift.

When I first started my job vs now pic.twitter.com/IosnWrEtb3

When you make your girl mad in the morning her work husband be waiting on her like pic.twitter.com/hkkp50WopF

Every night before work: "I'm gonna wake up early & get cute"
Also me every morning when I get to work: pic.twitter.com/g1Vawfat75

When you’re trying to think of ways to become a millionaire overnight so you don’t have to go to work tomorrow pic.twitter.com/N4cJFBOdRw

When your coworker walks out the restroom and you didn't hear the water run pic.twitter.com/dDVMm53Mt3