Hey Republicans, don't worry, that burn is covered under the Affordable Care Act

Paul Ryan bursting into his house, not saying a word to his wife, grabbing his badminton racket and walking right back out the door.

HOW A BILL BECOMES A NAHHH

When you control every chamber of government and you finally get the chance you dreamed of to screw over poor people and still fail. #AHCA pic.twitter.com/DHh8No0yIZ

Trump was right — all this winning feels fantastic.

Ryan: (Trump) did everything he possibly could.
[Flashback to yesterday, Trump pretending to drive a big big truck]
Narrator: He hadn't.

But in the end, he realized the dead weight he was lifting was… himself pic.twitter.com/t1vzFNsNnN 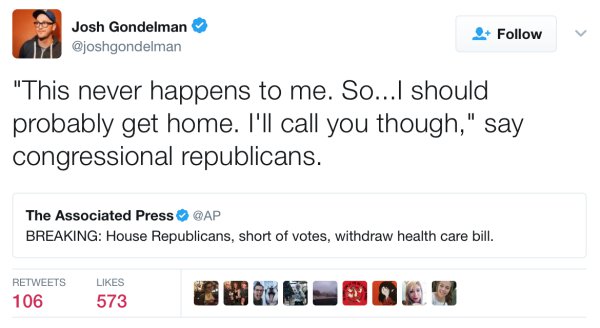 "Did you get the votes" pic.twitter.com/kHByIFG7bY

The Shart of the Deal

"What's the difference between Obamacare and your momma's new boyfriend? Obamacare still gonna be around tomorrow." pic.twitter.com/ph6GilmH1t

Do Romania and Chad Have the Same Flag?
How Many People Live in Cuba?
How Tall Was Mother Teresa?
The World’s Largest Gathering Of Humans