People say in Canada we don't have real problems, but pic.twitter.com/EEIK9QQbPJ

*Watches Americans deal with Trump*
"YOU THOUGHT CANADA WAS A JOKE WELL WHO'S THE JOKE NOW-"
*reads headline*
"damn we can't have anything" pic.twitter.com/DObUGx1e1S

Me: do you know where your slippers are dear?
Toddler Daughter: ummm…I think they're in Canada?

So we've narrowed it down.

Canada: Trudeau is behind Roll Up The Rim potatoes to distract from election reform.

If you are Canadian, Celine Dion is your legal mom.

8. On standing by helplessly

Being Canadian right now is like watching your big brother get his license and then immediately drive the family car into a liquor store.

My favourite part of La La Land was when the entire theatre laughed at the title screen that said "winter". It's -10 in Canada today.

Only 3% of Canadian Just for Laughs: Gags bits have resulted in the assassination of a foreign dictator

I'm not saying I'm a big deal but I just got an email from Gap Canada and it wasn't my first one this week.

14. On Canadians living in the U.S. right now

The only reason I'm not having 500 simultaneous heart attacks is I can always move back to Canada. How are the rest of you alive.

Sean Spicer: "Yesterday the president had an incredibly productive set of meetings and discussions with PM Joe Trudeau of Canada."
Me: pic.twitter.com/0hflW0p57g

Aren't you cold in just that t-shirt: the story of being a Canadian abroad 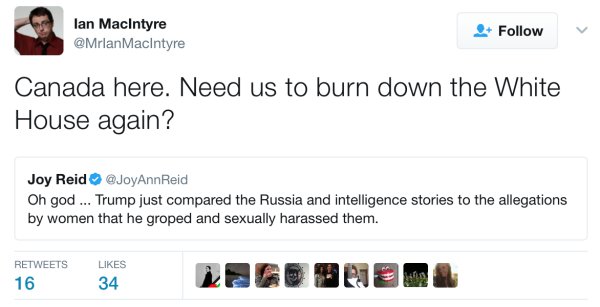 Your Chickens See Better Than You
26 Tweets That Perfectly Sum Up The Beauty Of Australian Culture
14 Good Things That Happened This Week That Should’ve Been Plastered All Over The News
Who Made the First Clone?