How Much Would It Cost To Be Santa Claus?

It will cost $24.3 billion to make the toys, plus $683 million to deliver them by ocean and road freight (delivery time 2 months). Or, if it absolutely, positively must be there overnight, air freight will cost $95.8 billion before discounts. Unfotunately, there aren’t enough planes in the world to deliver everything in one day and airport capacity is limited, so it will take around 5 days if every commercial and military plane in the world (40,000 planes total) is pressed into service. 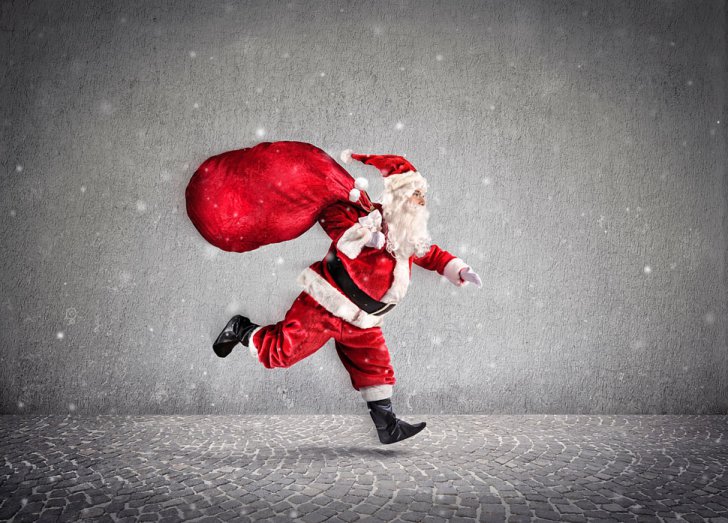 How many kids in the world? Where are they?

Around 27% of the world’s population is aged 0–14, according to the CIA (exercise for the reader: why did the CIA choose 14 as a cut-off age?). As a crude approximation, we can extrapolate that to 32.8% of the world being aged 0–17. People are spread out around the world as shown in the list below, as of August 2016.

Note that some regions of the world have a higher proportion of kids, but we will ignore this factor for the purposes of the calculation.

How expensive to produce a toy?

In 2000, one McDonald’s Happy Meal toy cost 43 cents to produce. Let’s be generous, and say that we expend a production cost of $10 per child on toys, including packaging and wrapping paper. We will also assume that these toys weigh a total of 2 kg per child and a volume of 0.01 m3, including packaging. So our toy budget is $24.3 billion and we have to ship 4.86 billion kg, with a volume of 48.6 million m3.

Where are we shipping from?

Depending on who you ask, Santa Claus lives in one of several locations:

However, in reality, modern Santa produces in and around Shenzhen, China. His northern residence serves mainly as a theme park, marketing headquarters and tax haven. So everything must be shipped from Shenzhen or nearby Hong Kong.

The most cost-effective way to send stuff is by ship and then road. The data here comes from an online Freight Calculator. A standard 40-foot shipping container has an interior volume of 67.6 m3, of which about 60 m3 is usable after accounting for fork lift pallets etc. So we can fit 6000 presents into each container. Therefore we will need to ship 405,000 containers. The world’s largest container ships can each carry upwards of 9000 containers, so we will need only 45 ships to carry all of the presents. The ocean shipping costs are broken down below ($cost/container x number of containers):

For the road shipping cost, we will make a wild assumption that the average road distance is about 3853 km, which is the distance from Los Angeles to Philadelphia. This costs around $1100 per container in the USA, which we will use as the overall cost. So we get: Total ocean + road freight cost = $236M + $446M = $683M

The point of origin will be either Shenzhen Bao’an International Airport or Hong Kong International Airport, which are very close to each other. Air freight requires two air legs (Hong Kong → regional hub → destination city) and one road leg. The exception is within Asia, which requires just one flight. The first-leg air freight costs are as shown below (cost quoted per present).

Do we have enough planes? In short, no. In 2015, FedEx shipped 16.02 billion tonne-km of air freight, while the top 10 companies combined shopped 85.528 billion tonne-km. This works out to shipping our load 17600 km – so it would be possible to do it only if every air freight company could delivery their annual capacity in one day. Modern cargo aircraft range in capacity from around 39,780 kg (Boeing 757–200 freighter) to 134,200 kg (Boeing 747–8F). If we take an average payload 0f 80,000 kg per plane, we will need 60,750 long-haul flights, plus the same number of short-haul flights. The world has about 20,000 civilian aircraft and 20,000 military aircraft, but most of them are not long-haul – so we will need some sort of well-organized short-hop relay system.

Another bottleneck is the number of airports. The capacity of a modern airport is around one take-off every 60 seconds, which is 1440 flights/day. There are ten civilian airports within 500 km of the area, so we can start around 15,000 flights/day. So it will take around four days to get all of the stuff out by air. After that, regional and local airports can handle the traffic easily – the world already handles around 100,000 scheduled flights per day.

What Did Someone do That Made You Think They Were Really Smart?
20 Bathrooms From Hell Made By People Who Probably Haven’t Used One
Hilarious Tweets About Work You Shouldn’t Be Reading At Work #1
18 People Who Were So Close To Making Something Useful