22 Times Feminists Had The Perfect Comeback

1. When one woman shut down outside opinions about her body 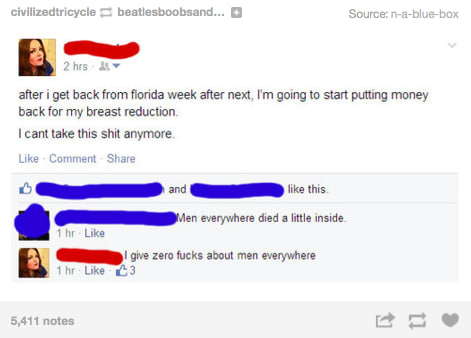 2. When one girl got the last laugh 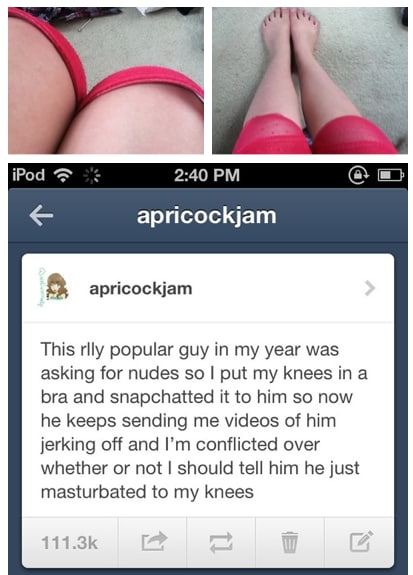 3. When someone called out this dude’s hypocrisy
white boy makes 35 complaints about women then says women complain too much: the video 4. When a “friend-zoned guy” was put in his place
how many “friend-zoned” guys does it take to change a light bulb? None they’ll just compliment it and get pissed when it won’t screw. veganasfuck
this is the best joke ever zombikki
haha…fuck you – sincerely every friendzoned guy ever dirtrider333
You wish – sincerely the women who are by no means obligated to sleep with you. amoracomplex
*mic-drop* kaylainthetardis

5. When this person actually terrified a guy with her comeback
I was at walmart the other day, and I was sitting on a bench waiting for my mom to pay, and I was braiding my hair because that’s something I do when I’m bored, and this dude walks by and says, “hey baby, what else can you do with your hands?” I gave him my most polite smile and said in the sweetest way possible, “strangle you.”
And I think I actually scared him because his eyes got kind of wide and he just walked away. isurvivedthekobayashimaru
I wish I had this kind of confidence codecherry

6. When this GIF comic was the only thing that could describe this burn
Hypothesis: if women are worse at parking, it’s only because they’ve been lied to about what eight inches is their entire lives posthumous-mcdouble

7. When this thread had too many wins in one place 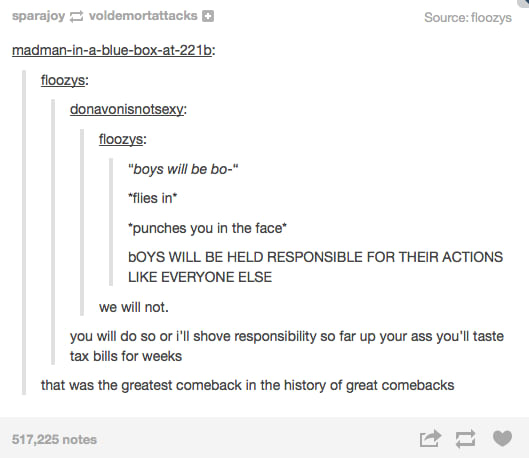 8. When this genius came up with the best way to respond to a request for nudes
if someone asks for nudes just tell them this and they’ll leave you alone

9. When this ~charming~ argument was called into question
i’m swooning maclonna 10. When this Omegle user warded off an internet creep 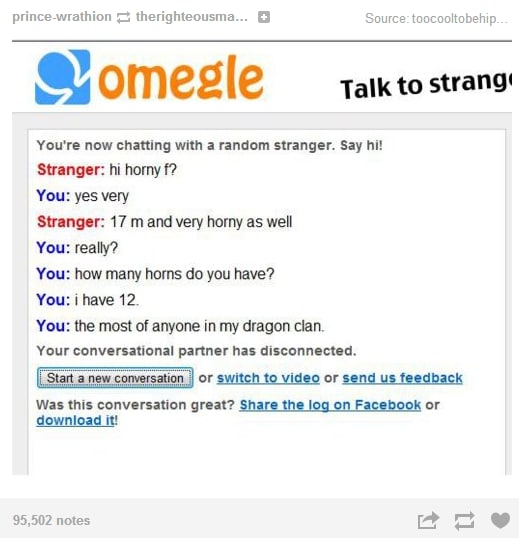 11. When bra visibility wasn’t the real problem
if a u can see a someone’s bra through their shirt do you care. like do u really care. it’s probably a hecka cute bra right and i bet they spent like 20 dollars on that bra. maybe even 30 dollars idk. don’t shun the bra appreciate the bra mskneesocks
It’s underwear. It’s not supposed to be seen the-super-sized-mcshizzle-man 12. When this person made a very good point.
“is there an international men’s day?” yes actually! it’s tomorrow! and the next day! and the day after! and every other day of every year
laruie

14. When this restaurant did the best thing ever
a restaurant in my hometown got a review that said the servers should “show some skin” so the owner added a potato skin special to the menu and all the proceeds from the special go to the west virginia foundation for rape information services leepacey
That’s exactly the appropriate response theinnkeeperlibrarian

15. When a 1970s feminist had the perfect response to a sexist ad
Feminist Graffiti from the 1970s 16. When this guy was clearly in a school band
stop white boys 2k15 17. When someone shut this question down promptly

18. When this hero called out ridiculous dress codes 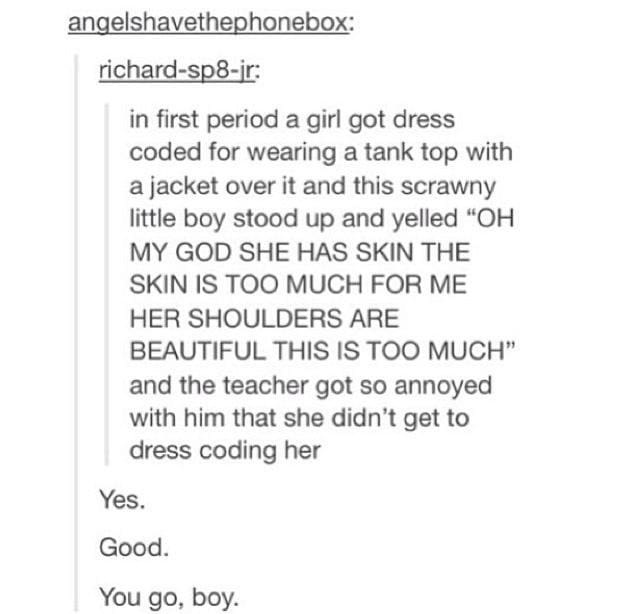 19. When this person had the greatest nonverbal comeback

20. When an “anti-feminist” got burned so bad you could feel it through the screen
I’m anti-feminist for many of the same reasons I’m an atheist. mr-cappadocia
So you don’t believe women exist?
Its okay. I’m an atheist because I don’t believe in something I can’t see or touch. I suppose women are much like that for you.
kajiraraven
Somebody get him some ice. ineedmasculism
okay, but a dude has to do it, cause he’s gonna freak the fuck out if he sees some floating ice coming over to him. heatherbat
10/10 slipandstumble

21. When “make me a sandwich” was flipped 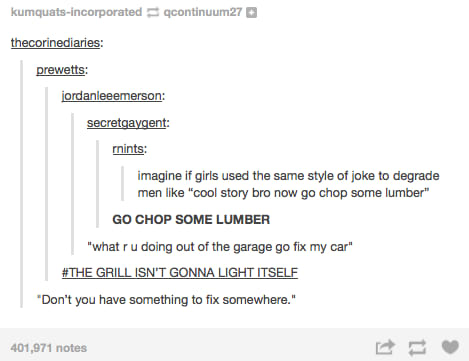 22. And finally, when Carson got called the fuck out 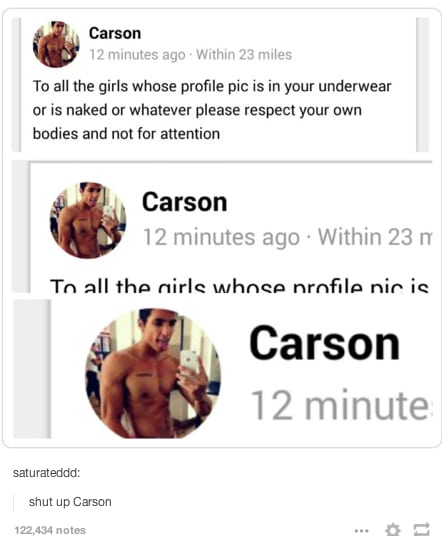 12 Gyms That Have Infuriatingly Gross And Rude Members
20 Animals Who’ve Made Big Mistakes And Now Regret Them Bitterly
26 Tweets That Teens Won’t Really Understand Unless They Go To College
What Is The Best Example Of Someone Getting The Last Laugh?