I have a return but I don't have the tags or the receipt and I didn't bring my card and I don't want store credit.

1. When you have to act like you care about the customer’s complaint

When a customer tells you to pass on a complaint to the manager #retailproblems pic.twitter.com/DscXqbmnvE

2. When you know the only thing in the stockroom is cobwebs and your broken spirit

When a customer asks "are you sure you don't have this in the back?" #workingretail pic.twitter.com/CbOsJ6lqHj

3. When you spend an hour helping a customer and don’t even get the commission

Cashier: "Did anyone help you today?"

Customer I helped: "I don't think so"

4. When it should be clear that you’re not folding dozens of jeans onto a shelf for fun

#workingretail
Customer: do you work here?

me: no I just wear a name tag and carry a walkie around for fun

5. When working the register feels like you’re on a sinking ship

6. When getting to the break room feels like you’re running a 40-yard dash

When ur hustling to the bathroom & 5 people ask for ur help. Like yo I'm about to pee myself I'd rather not share it w/ u #retailproblems pic.twitter.com/cUVtkiXKmw

7. When your manager actually has your back (for once)

when an irate customer gets shut down by your manager & is asked to leave. #WorkingRetail pic.twitter.com/wIlQJlD0yh

8. When you’re on “work mode” anytime you’re around strangers

#WorkingRetail being stuck in customer service mode even when you're off the clock and in another store.

9. When someone pulls this jerk move

11. When you realize you’re overworked and underappreciated (basically a daily occurrence) 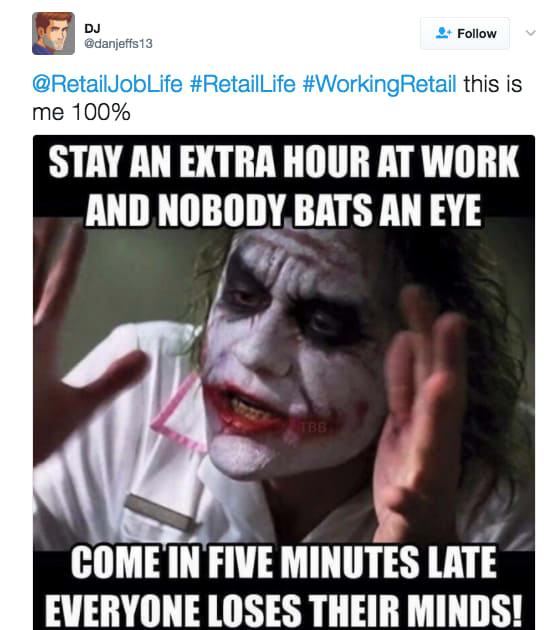 12. When you feel like reminding them that you DON’T set the prices

customer: well at *insert store* I can get it cheaper over there..

inside your head: well take yo ass over there then!!#workingretail pic.twitter.com/vrj83zVrq2

13. When your work week starts on Friday

14. When you’re clearly too busy working

#WorkingRetail It's so nice outside, you should be out there enjoying it! pic.twitter.com/TKqNOj08gr

15. When a customer threatens to take their business elsewhere

16. When you’ve done everything but act it out in a three-act play

When you're tired of explaining the sales to customers for the 100th time #workingretail pic.twitter.com/DYJ2zFP2VP

17. When the customer ~mistakes~ you for an automated checkout machine

I love customers who refuse to speak or look at me through an entire transaction. It's cool, I'm not a person or anything.#retailproblems

18. When you hope that your manger realizes that you’re one employee, not three

#workingretail during your 4hr shift fold the items in all 36 of these boxes,help customers, & clean the whole store ok? pic.twitter.com/LVVTOZIL36

19. When you know there is no point in trying to run the customer’s credit card again

customer: I think your machine is broken

20. When you wish you were keeping notes

So much dumb shit happens in one shift that I literally can't remember all of it by the end. #WorkingRetail

Scanner: *doesn't scan*
Customer: oh it must be free! Hahaha
Me: #workingretail pic.twitter.com/hyPMj2wUcj

22. When you haven’t even set foot in your job and you all ready know it’s going to a long day

Pulling up to the mall and seeing the parking lot jam packed full#workingretail pic.twitter.com/UXHIWjuygr

23. When you get hit with the ultimate returns doozy

#WorkingRetail
"I have a return but I don't have the tags or the receipt and I didn't bring my card and I don't want store credit" pic.twitter.com/U895LJkPra

24. And finally, bracing yourself for the worst whenever someone making this face and sporting this hairstyle walks up to you

everyone in retail knows "the 'can i speak to your manager' haircut" #retailproblems pic.twitter.com/3RGwDd0LyP