Live your life so Professor McGonagall would be both proud and exasperated by you.

1.
Honestly though, it’s so ironic that people in the Harry Potter fandom can have problems with women being home makers because they are not living up to their potential or whatever. Like….did you forget Molly Weasley? She’ll kick evils ass while knitting you a sweater.
romanticronweasley

2. This undeniable truth
If you don’t believe that Hermione Granger, Ginny Weasley and Luna Lovegood ended up being the most badass feminists, you know nothing
lilyevans-obliviate

3. This perfect crossover that you know probably happened at some point
Harry: GINNY!!
Ginny: What?
Harry: Where’s the Sword of Gryffindor?
Ginny: What?!
Harry: Where. Is. The. Sword. Of. Gryffindor??
Ginny: I, uh, put it away.
Harry: Where?
Ginny: WHY do you need to know??
Harry: I need it!
Ginny: Uh-uh! Don’t you think about running off doing no daring-do! We’ve been planning this dinner for two months!
Harry: The Wizarding World is in danger!
Ginny: My evening is in danger!
Harry: You tell me where my sword is, Ginny! We are talking about the greater good!
Ginny: “Greater good?” I am your wife! I am the greatest good you are ever gonna get!
hpconversations

4. This. Just this
BABY: m…m…
ME: come here, quick! i think she’s going to say mama!
BABY: m…minerva mcgonagall is the best headteacher hogwarts has ever had
ME, OPENLY WEEPING: i’m so proud
accio-shitpost

5. This reminder of what Ginny Weasley had to deal with on a daily basis
HARRY: i’m sorry ginny…i’ve got to go and hunt horcruxes to stop voldemort…i have to break up with you because you’ll be in danger too…
GINNY: i mean, first off, dude’s probably gonna take over hogwarts so technically i’ll be in less danger if i go on your little soul-searching bff camping trip
GINNY: second of all, i don’t think voldy’s gonna give a shit if we’re dating or not when he murders me for being a ‘blood traitor’ or whatever bullshit reason
GINNY: and thirdly, i am better at magic than you and ron combined so like, move over scrub, me and hermione are gonna be killing us some dark lord
accio-shitpost

6. This beautiful little McGonagall moment that we should never forget 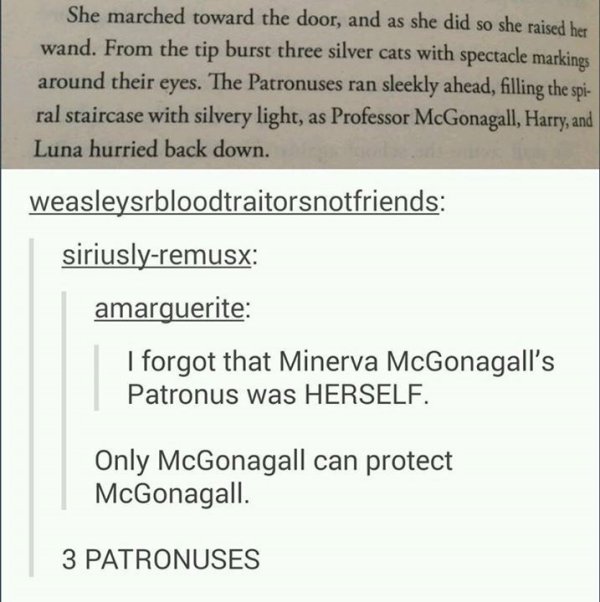 She is the best patronus ever
nerd173

7. This reminder of why Luna is so perfect 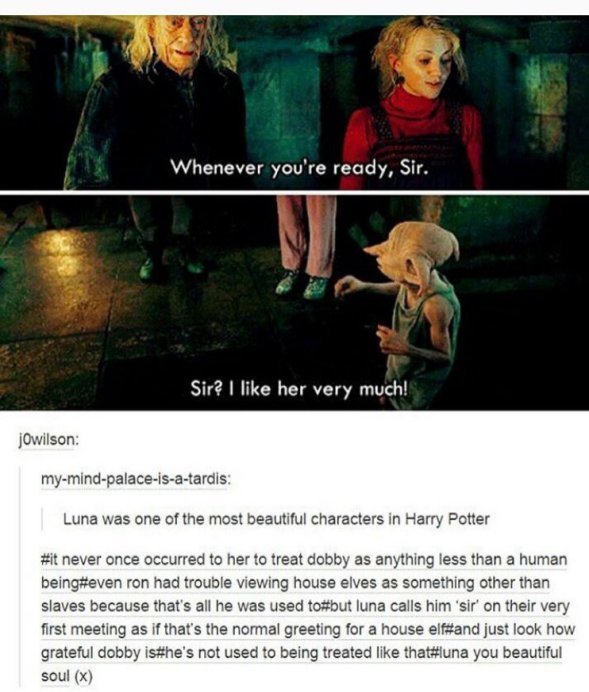 8. This argument for why you should ALWAYS READ THE BOOKS
book ginny is like the most hyper-competent young witch in the entire hp series
movie ginny is basically a cardboard cut out with a speech bubble that says ‘i love harry!’ on it
accio-shitpost 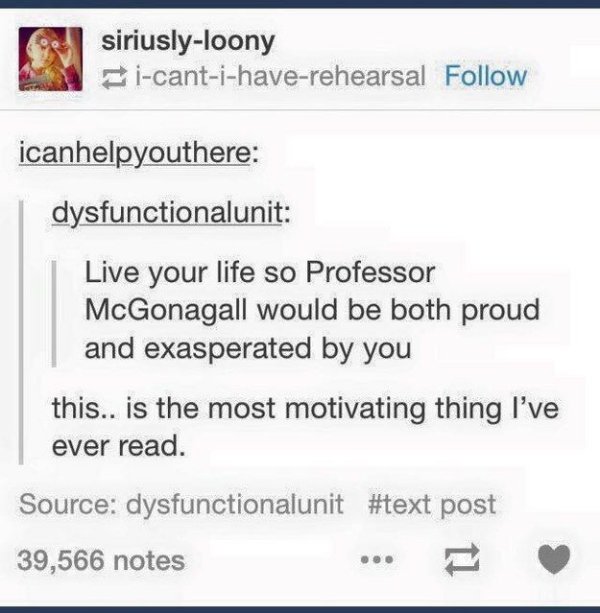 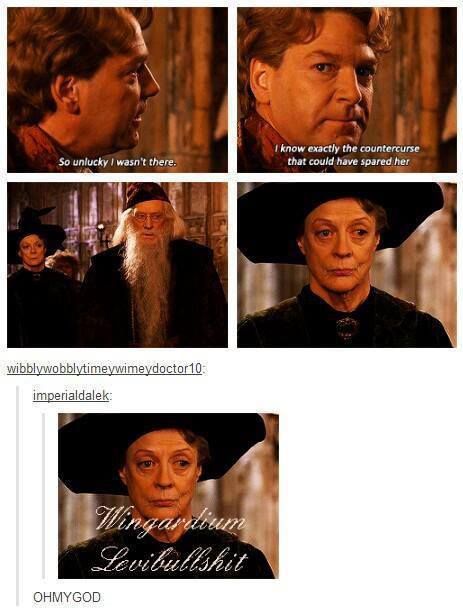 11. This Nymphadora Tonks headcanon, which is totally believable 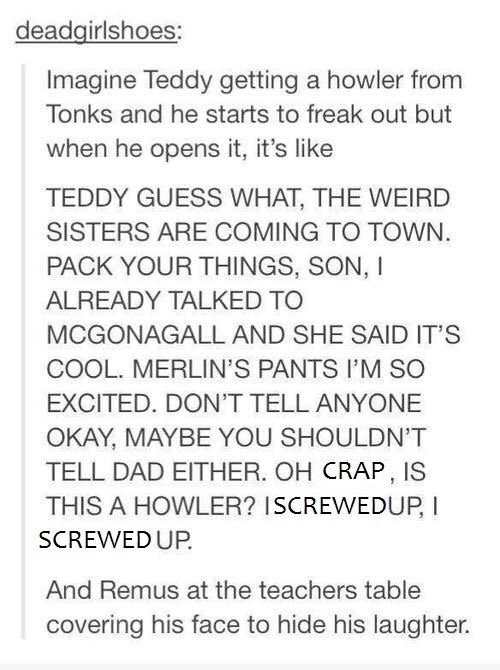 12. This reminder that Hermione Granger wasn’t the goody two-shoes we were made to believe
i just love the idea that hermione granger had enough of a good reputation by third year that she was granted the power of legal time travel despite being 13/14 and had once deliberately set one of her teachers on fire?
accio-shitpost

13. This proof that Luna Lovegood could be totally badass and sweet and kind at the same time 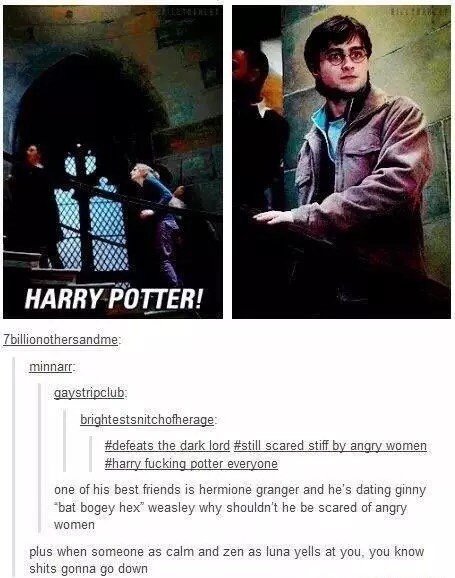 14. This important PSA reminding us why we should all appreciate Luna way more than we already do.
https://hug–warts.tumblr.com/post/158625346369/psa-to-remind-everyone-that-luna-lovegood-is-one
hug–warts

15. Which is one of the most underrated moments in the entire Harry Potter series, tbh 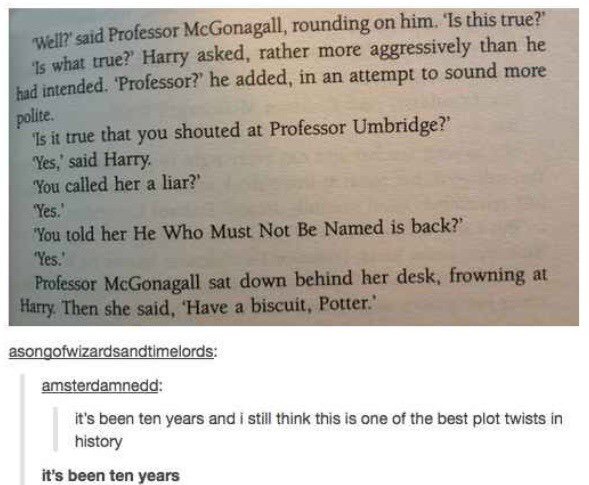 16. This proof that, when faced with Umbridge, McGonagall’s sass levels reached new heights 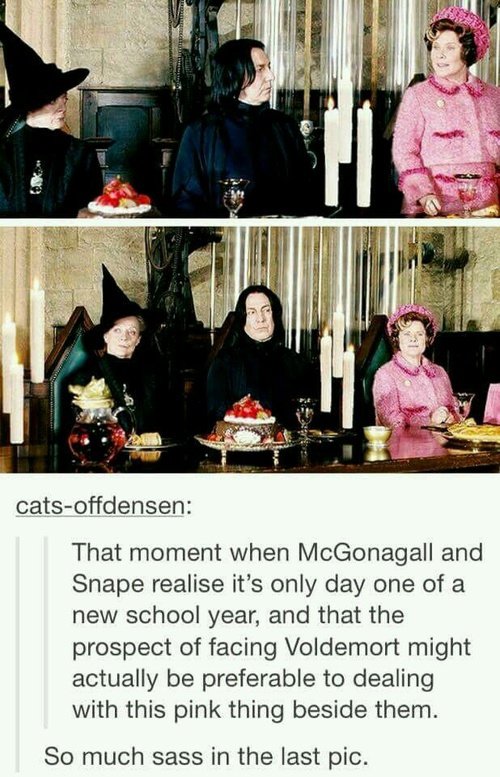 17. This, which is slightly terrifying, when you think about it 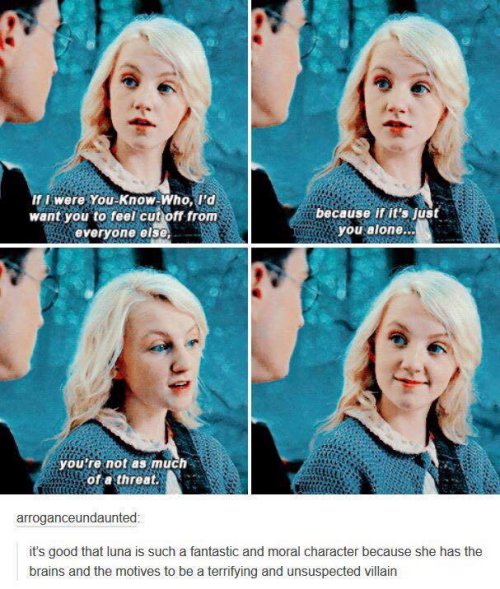 18. This truth about how Albus Severus Potter ~really~ got his name 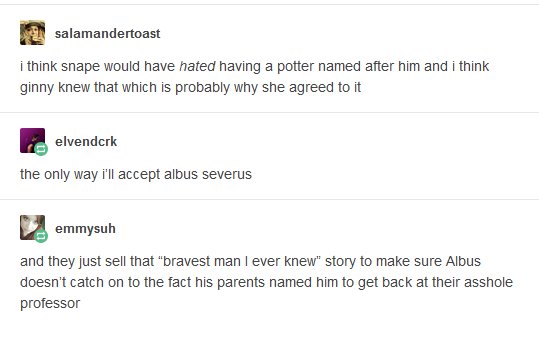 19. This proof that Hermione is better than anyone, tbh. 20. This headcanon, which would’ve made the series a whole lot shorter 21. And this perfect reminder that we should all bow down to Hermione Granger, because she truly does not give a fuck.
hermione: rules are Very Important™
hermione: -sets teacher on fire-
hermione: have you checked the restricted section?
hermione: our only answer is polyjuice potion, brewed extremely illegally in the girls’ bathroom. btw we have to steal the ingredients
hermione: we gonna fuCK time up, fuck what the ministry said, let’s save a gd hippogriff and an escaped felon
hermione: -knitting hats- don’t mind me, just tryna trick all the house elves into going free
hermione: -keeps a HUMAN BEING in a jar-
hermione: hey harry, u should lead us in a secret underground defense group. i’ll make a sign up sheet. don’t worry, it’s hella cursed
hermione: oh, remember that human being animagus i captured? let’s blackmail the shit out of her to get her to write an article for us
hermione: -uses confundus on mclaggen-
hermione: -obliviates her FUCKING PARENTS-
hermione: -runs away from school to fight the dark lord-
hermione: anyway, rules are Very Important™
severus-snape-is-a-butt-trumpet