2. Fire on a stick
I forgot the word “torch” earlier today so I googled “fire on a stick.” I have two degrees in English.
@goodhairperson

3. The compressed horse
So we have an Italian exchange student at our school. And he and I were hanging out and he saw a pony, and he tried to show me but he didn’t know what it was called so he just pointed at it and said “Look, the compressed horse.”
And then he just grinned at his complete understanding of the English language.
linguisticsyall

4. Black and white fart squirrel
English is not their first language 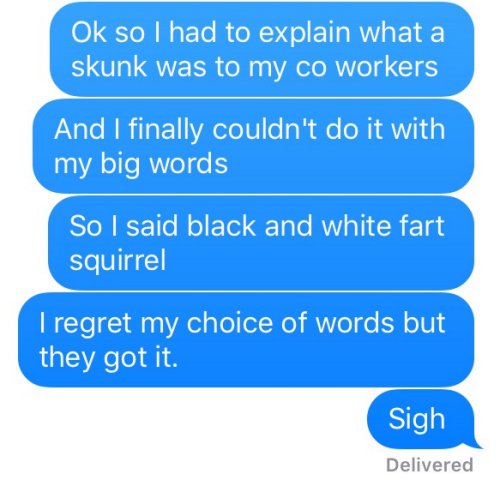 6. Three color Halloween thing
One of those days where I forgot the word for candy corn

8. Sea pancake
i was talking to my boyfriend
and i was trying to describe a type of marine animal
but i couldn’t think of it’s name
so i said ‘sea pancake’
manta ray.
manta ray is the word i was looking for.
maxkirin

10. Not breakfast
earlier today i forgot the word for lunch and just called it “not breakfast”
@erinradar

11. Latex dick wrap
Yas forgot the word for condom and i just-

12. Points in mild alarm
SO ENGLISH ISNT MY DADS FIRST LANGUAGE AND HE FORGOT THE WORD FOR PIMPLE SO HE JUST LOOKED AT ME AND POINTED AT MY FOREHEAD IN MILD ALARM
@agilaogem

16. Eyelid hair
my dad was trying to say eyebrow and he forgot the word for it and said eyelid hair . 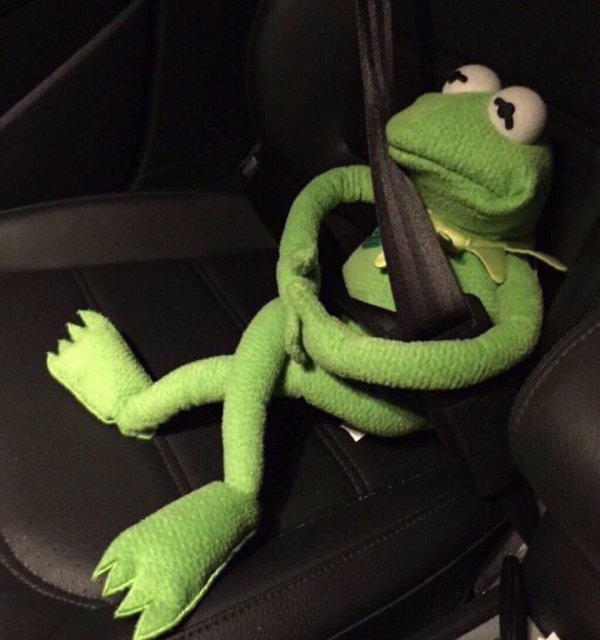 17. Gremlin holder
I couldn’t remember the word “stroller” so I called it a “gremlin holder” but, sure, I’ll be your kid’s godmother.
@Kendragarden

19. We don’t have time to be sexy
My boss’s first language isn’t English. However, she loves giving inspirational speeches to everyone. I think today she was trying to tell us “don’t just stand around looking pretty”, but what she actually said was “WE DONT HAVE TIME TO BE SEXY”.
orriculum

20.
for chinese new year they get all these famous actors and comedians together and they do a lil show and one of the comedians was like “i was in a hotel in america once and there was a mouse in my room so i called reception except i forgot the english word for mouse so instead i said ‘you know tom and jerry? jerry is here’ pansoph

my chinese teacher once shared this story in class about someone who went to the grocery to buy chicken, but they forgot the english word for it, so they grabbed an egg, went to the nearest sales lady and said “where’s the mother” eruriholic

When I was a teenager, we went to Italy for the summer holidays. We are German, neither of us speaks more than a few words of Italian. That didn’t keep my family from always referring to me when they wanted something translated because “You’re so good with languages and you took Latin”. (I told them a hundred times I couldn’t order ice cream in Latin, they ignored that.) Anyway, my dad really loved a certain cheese there, made from sheep’s milk. He knew the Italian word for ‘cheese’ – formaggio – and he knew how to say ‘please’. And he had already spotted a little shop that sold the cheese. He asked me what ‘sheep’ was in Italian, and of course, I had no idea. So he just shrugged and said “I’ll manage” and went into the shop. 5 mins later, he comes out with a little bag, obviously very pleased with himself.
How did he manage it? He had gone in and said “’Baaaah’ formaggio, prig.”
I was done for the day.
cuddlyaxe

This makes me feel better about every conversation I had in both Rome and Ghent. ravenpuffheadcanons

I once lost my husband in the ruins of a French castle on a mountain, and trotted around looking for him in increasing desperation. “Have you seen my husband?” I asked some French people, having forgotten all descriptive words. “He is small, and English. His hair is the color of bread.”
I did not find my husband in this way.
In rural France it is apparently Known that one brings one’s own shopping bags to the grocery store. I was a visitor and had not been briefed and had no shopping bag. I saw that other people were able to conduct negotiations to purchase shopping bags, but I could not remember the word for “bag.”
“Can I have a box that is not a box,” I said.
The checkout lady looked extremely tired and said, “Un sac?” (A sack?)
Of course. A fucking sack. And so I did get a sack.
elodieunderglass

I once was at a German-American Church youth camp for two weeks and predictably, we spoke a whole lot of English.
When I phoned my mom during week two I tried to tell her that it was a bit cold in the sleeping bag at night. I stumbled around the word in German because for the love of god, I could remember the Germwn word for sleeping bag.
“Yeah so, it’s like a bag you sleep in at night?”
“And my mother must probably have thought I lost my mind. She just sighed and was like ‘So, a Schlafsack, yes?”
Which is LITERALLY Sleeping sac … The German word is a basically a one on one translation of the English word and I just… I failed it. At my mother tongue. BIG
kat2107

My former boss is Italian and she ended up working in a lab where the common language was English. She once saw an insect running through the lab and she went to tell her colleagues. She remembered it was the name of a famous English band so she barged in the office yelling there was a rolling stone in the lab… eridaniepsilon

I’m Spanish and have been living in the UK for a while now. I recently changed jobs and moved to a new office which is lost somewhere in the Midlands’ countryside. It’s a pretty quaint location, surrounded by forest on pretty much all sides, and with nice grounds… full of pheasants. I was pretty shocked when I drove in and saw a fucking pheasant strolling across the road. Calm as you please.
That afternoon I met up with some friends and was talking about the new job, and the new office, and for the life of me I couldn’t remember the English word for pheasants. So I basically ended up bragging to my friends about “the very fancy chickens” we had outside the office.
Best thing is, everyone understood what I meant.
backonrepeat

I love those stories so much… eridaniepsilon

Picture a Jewish American girl whose grasp of the Hebrew language comes from 10+ years of immersion in Biblical and liturgical Hebrew, not the modern language. Some words are identical, while others have significantly evolved.
She gets to Israel and is riding a bus for the very first time.
American: כמה ממון זה? (”How much money?” but in rather archaic language)
Bus Driver: שתי זוזים. (”Two zuzim” – a currency that’s been out of circulation for millenia)
bigsis144

When my parents were in Paris during their honeymoon, they went to a very upscale restaurant for dinner. My mom didn’t know what one of the words on the menu meant, so she pointed to the word and asked the waiter “qu’est-ce que c’est?” The word was lamb, but the waiter didn’t know the term in English, so he just said “le petit baaaaa” the-adequategatsby

When I first got to Japan I was looking for free-range eggs but didn’t have the vocabulary to ask properly, so I said “Do you have eggs from happy chickens that don’t live in a box?”
rosalui

Cats Eating More Fish That Their Owners
Jimmy Fallon Made #DadQuotes Trend On Twitter And You’re Going To Laugh And Groan So Hard
22 Of The Best Tweets From Super Bowl LI
Amazon Echo, a nearly perfect spouse.