1. This woman who’s great at clapping back

my mom got my brother a Princess Peach cake for his 4th birthday and his dead beat dad said something so I just… pic.twitter.com/ll5kYvFOi1

2. And this damn clever cross-stitcher

This girl in my building saw me crying in the hallway last night and sent me these this morning pic.twitter.com/oZYSSbZkiS

4. This makeup vlogger who is happy to be brutally honest 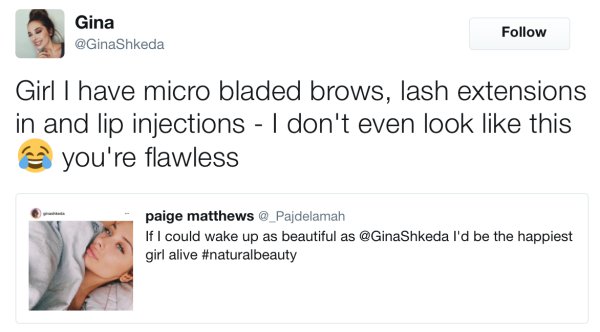 5. This grandma, who would be great to go on holiday with

My grandma is in Mexico taking shots with random girls on the beach and posting pics of it with captions like they're bff's.. pic.twitter.com/SA47BMUsX3

she's my new president now, i don't care what the laws say pic.twitter.com/v4C7dH6wxX

8. This woman who you’d get a McDonald’s with after a night out

9. This best friend who goes above and beyond

when your best friend wants to make sure your first date goes well pic.twitter.com/wtwDUH8gMI

How many one direction puns can I get in before this catfish catches on? pic.twitter.com/IM2Pf35huA

11. These girls who made a new friend

Thanks for the tip mum pic.twitter.com/GCjJZv9snB

13. This woman who stared down a far-right protester like it was no big deal

Who looks like they have power here, the real Brummy on the left or the EDL who migrated for the day to our city and failed to assimilate pic.twitter.com/bu96ALQsOL

14. This woman with her game-changing idea

15. This woman who knows how to come out in style

2 years ago today I came out pic.twitter.com/nfHGq084yz

16. And this woman who doesn’t want young girls to put up with shit

my 13 year old sister was dress coded for her shirt today for "revealing too much chest and shoulder" so i made her a shirt to change into pic.twitter.com/NdRQws91HB

17. This girl who had a great response after being told to change her shirt

When you're told to change ur shirt before Thanksgiving Dinner so you happily oblige :-) pic.twitter.com/T8pabtK7D8

18. This Facebook commenter, who has the purest of compliments