Honestly, I don't get this kid sometimes.

1. Dummy
Harry Potter wakes up in hospital. “Welcome back. You’ve been in a coma for 8 years” says the doctor. “You ran face first into a wall lmao”
@jonseven3

2. Pull it together
[harry potter pulled over drunk driving]
HARRY: expecto patronum. pretend u were driving
[stag gets behind the wheel]
STAG: u have a problem
@bobvulfov

3. Good sense of people
DUMBLEDORE: Now, give a warm welcome to our new Defense Against the Dark Arts professor, Lucifer Serpentine HARRY: I bet this dude is great
@skullmandible

5. is this u
the epilogue for the last harry potter book should have just been thirty-year old harry forwarding dozens of cat videos a day to mcgonagall with the caption”is this u” on all of them
gaffegaffe

6. Ouch, another one
Hey Harry Potter that magic trick was cool. Hey Harry what’s the square root of 64? Oh wait you can’t do that because there’s not a spell for it lmfao. You never learned math
best-text-posts

harry can defeat the dark lord but can’t pick up some bacon holymotherofrowling
he looks at it like he just dropped his hopes and dreams needsmorebassclef
Whoop there’s goes my bacon just like my parents and my pride. steal-an-ashtray-solve-a-crime

10. Mkay
leave it to harry ‘great decisions’ potter to have his entire second triwizard task plan be ‘eat this weed that a morally dubious house elf gave me and hope’
accio-shitpost 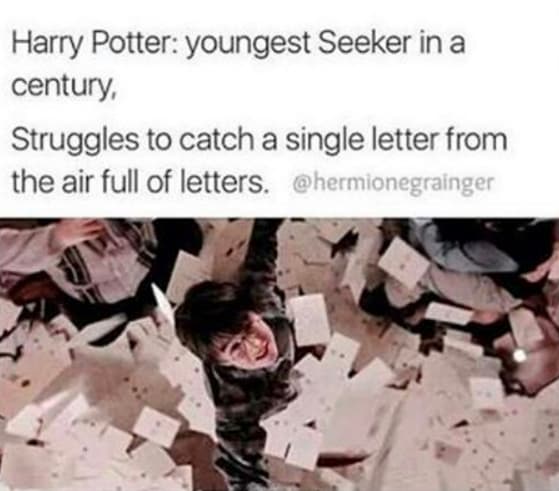 13. Where am I?
I love Harry’s face. Everyone else just kind of looks down, all serious, but Harry’s like “The fuck kind of school is this?!?” skinnyballerinas
#sassy harry at it again from-james-to-lily 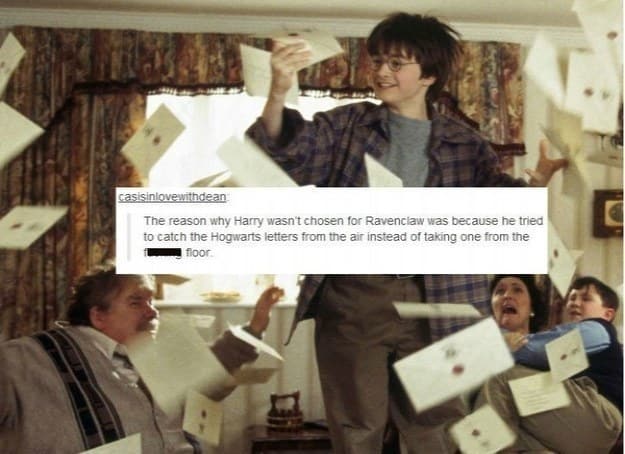 15. Snape 5ever
I’m trying to imagine how Harry told Hermione and Ron he forgave Snape
Harry: so like Snape’s actually nice
Hermione: …
Ron: ..
Hermione: Harry, he harassed you for 7 years
Ron: not to mention that quidditch incident
Harry: before he died, he said I had my mother’s eyes
Hermione: everyone says that Harry
Harry: yes but he had a crush on my mum and she didn’t like him back
Ron: so?
Harry: I’m gonna name my kid after him
Hermione: Harry no
Harry: Snape 5ever
requiems

16. Hmm, I’ve seen that somewhere
HBP: How did Harry not realize the hand writing in the Half-blood Prince’s potion book was the same as the hand writing he had spent 5 years reading off a black board?

#because Harry’s a stupid bitch that’s why
#For the main character of such a good book series #He really is a dumbshit #Ooh what is this long skinny broomstick shaped package? #ITS A BROOMSTICK NO WAY
#Slytherin house is a snake #heir of slytherin can talk to snakes #HMM I WONDER WHAT’S IN THE FUCKING CHAMBER OF SECRETS #MAYBE IT’S A FUCKING CHIHUAHUA #see this is why he’s not in ravenclaw
emmavalerieweasley

#this is why they made you live under the stairs for 10 years.
kaeandlucy

20. Observant
You know why Harry Potter is amazing? 99% of fan theories, headcanons and meta could be canon because Harry is about as observant as a brick wall. Did Slytherins come back to fight in the Battle of Hogwarts? Did Draco Malfoy enjoy crossdressing? Was Hermione transgender? Who knows, certainly not Harry yourperfectlittleanarchist
harry didn’t notice Hermione time traveling around him for a whole year or his own teacher’s hand writing q33r
harry didn’t notice that he was a wizard urban-emo
The glass is just gone I don’t know maybe that just happens with snakes sometimes the44th

21. Take a breather
Every year Harry Potter goes to school and somebody tries to kill me. Bro stay home 1 year, take a break, kick your shoes off,watch Netflix.
@AdelTWL

22. Sounds about right
Harry Potter had a spell for defogging his glasses but not for eliminating the need for glasses
@donni

23. The burns won’t stop coming
Don’t worry if you peaked in high school. So did Harry Potter
@sageboggs