30 Memes To Send To Your Mom Right Now

But, first, tell mom what a meme is.

1. When she takes wayyyyy too long to text you back because SHE ONLY TYPES WITH ONE FINGER

pretty sure every mom in the world texts like this pic.twitter.com/Gp9SBorAbV

When your mom says, "I'll be back in 5 minutes" pic.twitter.com/SIZToC8ivN

3. And when her version of only needing a “few things” is your version of “the entire store.”

Moms be like "I'm only grabbing two things" pic.twitter.com/Ouvrd4AteP

4. When she won’t let you do something just because all of your other friends are doing it too

Mom: if all your friends jumped off a bridge would you?
Me:
pic.twitter.com/76xIRBF2Qc

5. When she’s just a *little* too proud of your accomplishments

When your mom is bragging about you and she says something that's not necessarily true pic.twitter.com/FeE6j0sZqn

when u have a question for your mom but she's on phone so u follow her silently waiting for her to end the call pic.twitter.com/Sg1k9FgIoy

7. And god help you if you actually interrupt her phone conversations

How your mom looks at you when you try to get her attention while she's on the phone pic.twitter.com/2kFZZidOqp

8. When she hates anyone who has ever wronged you, because you’re her baby

When someone does you wrong then tries to come back into your life but you already told your mom about them pic.twitter.com/pLwIke7vkp

9. When you hear your full name being called, you know some shit is about to go down

When your mom screams your full name and you look nervous trying to remember what dumbshit you did pic.twitter.com/em2IKdgWaY

10. When she assumes you know every single person on the internet

When you show your mom a video and she ask who it is like you supposed to know pic.twitter.com/B5Svtj0NJn

11. When she leaves you alone in public and you see your life flash before your eyes

when your mom tells you to wait in line so she can grab something and it's ur turn but she didn't come back yet pic.twitter.com/Pjs3bqqpNC

12. When she’d rather give you her kidney than lend you a few bucks

13. When she doesn’t approve of the outfit you spent forever putting together

When your mom says "wtf are you wearing" and you thought you looked good as hell pic.twitter.com/jFgWwATk1L

14. And when she does approve of your outfit, but finds some outrageous way to ruin it

When your whole outfit on point, but your mom tells you to wear a jacket pic.twitter.com/dBqqU4zz86

15. When your mom puts you through the cruel and unusual punishment that is trying on awful clothes she picks out

When your mom makes you try on clothes you hate pic.twitter.com/RqXBtjTM4X

16. When your grandma takes your side in an argument with your mom and all is good and right in the world

When your grandma tells your mom to leave you alone pic.twitter.com/fOvneuUt6R

Me: u need sum help

Mom: no I got it. I do everything else in this house anyway. Yall gone miss me when I'm dead pic.twitter.com/PkS0wPsUN6

18. When your mom is a passenger in your car and makes you relive the days of drivers’ ed

When you're driving your mom around and she won't stop criticizing your driving pic.twitter.com/EWWWDKhH3v

19. When she has the nerve to call you down to eat, but really it’s just to set the table first

When your mom calls you down for dinner & it's not ready pic.twitter.com/IKPZVMJ41V

20. When she can get away with things that other people wouldn’t dare think of doing to you

The only person in the world who's allowed to text me like this pic.twitter.com/96lb0lHaWg

21. When she needs to know every.single.detail. of your personal life

mom: who u texting
me: im on twitter
mom: who u tweeting pic.twitter.com/F9eyvVSCoh

22. When she knows you better than anyone else, but at the same time, doesn’t understand your sense of humor 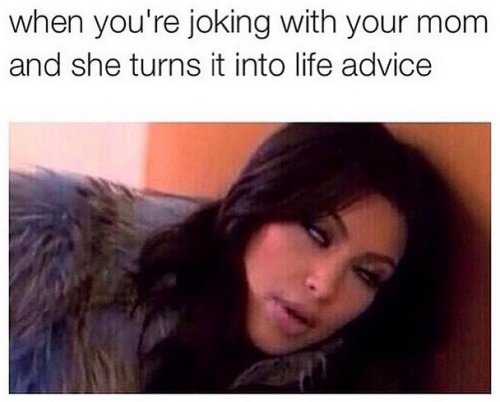 23. When she makes you try a food you just know you’re going to hate

When your mom forced you to eat something pic.twitter.com/yK6ISCWQE3

24. When you turn into her parent any time she tries to have a life

when mom is trying to leave without telling me where she going pic.twitter.com/5az4EjZZuX

25. When she tries to wake you up for the millionth time, and loses her shit when you’re still in bed

when your mom has been telling u to wake up like 228355 times and u still laying down n she suddenly come in ur room pic.twitter.com/c3CfOQIVkR

26. When she knows she just got one over on you

every mom on Christmas while you're opening up that gift they swore they weren't getting you pic.twitter.com/t5QCIKGP9y

27. When she’s the queen at calling for you but never answering back

28. When she could basically care less if you’re sick unless if you have a fever, are throwing up, or dying

Me when my mom is sick VS. my mom when I'm sick pic.twitter.com/FdBqcoM01V

29. When she truly deserves only the best for dealing with you

When good things happen to your mom pic.twitter.com/Bq8Ks01eX2

30. Because, at the end of the day, she’s the most amazing person you know and you wouldn’t trade even her most annoying moments for anything

you ever just sit down and get overwhelmed by thoughts of how much you love your mom pic.twitter.com/9d4UkCLuBH