24 Funny Tweets That’ll Distract You For A Hot Minute

*wipes doritos dust onto cum-stained sweatpants* hmmmmm time to pick out a flawless wife on the internet. not rihanna her forehead's too big

did shrek not wear this pic.twitter.com/I25R4NoIWD

[sees girl reading The Catcher in the Rye]
"Ah I love that book. The way he just [clenches fist] catches all that frickin rye." 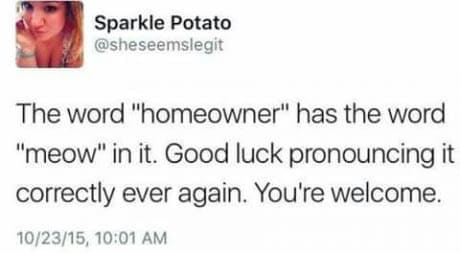 when y'all subtweet and I have to search for the full story pic.twitter.com/ax1LvQCGAI

You millennials and your obsession with public healthcare. Back in my day we just died

"yeah of course I can paint your ceiling." Michelangelo scoffed to himself, "gonna paint a bunch of dudes with they dick outs on it tho"

One time I saw a video of a guy holding up a sign that said "I love you Stevie" at a Stevie Wonder concert. I think about this a lot.

Fuck, I slept in

I just laughed so hard I have to go use a rescue inhaler now pic.twitter.com/XuWgFm5PYC

how'd he have time to write all those plays then pic.twitter.com/O6I4qc4YPY

My 10 yr old son just found out about the NASCAR driver named Dick Trickle. I may have to get oxygen. The kid is losing it.

My evil clone:[pointing to me] Shoot HIM, he's the clone

Friend:[aims at the clone] The REAL Alex would never pass up an opportunity to die

Am I the only one who charger look like this? (Excuse my feet btw) pic.twitter.com/8LVV7DV3vM

I'm sorry Ms. Jackson (Oooooo)/ I am four eels/ Never meant to make your daughter cry/ I am several fish and not a guy

Generalising a bit there pic.twitter.com/CeyFjcyRnq

The First Public Modern Bank in the World
Something People Don’t Know About Africa
How To Remove Unwanted Objects
What Was The Weirdest Compliment You’ve Ever Received?