If your ma doesn't scroll this post with her index finger, is she really your ma?

*driving with my mom in the car*

Me: *goes 1 mph over the speed limit*

me: I wanna move to another city as far away as possible.
me when I don’t seen my mom for a week: pic.twitter.com/YRJIJ24jlq

Sure my mom birthed & raised me, but I've had to explain how to check her email 95,000 times, so let's just call it even.

Most conversations with moms start with, "Did you read that article I sent you?"

When your mom gets home and you realize you forgot to take the chicken out the freezer pic.twitter.com/4dEOYbFKBK

When your mom call your name and you respond "what" and she don't answer back because she want you to go to her but you comfortable in bed pic.twitter.com/gjyZX7OYTQ

Mum: you'll grow into them

Is your mom even your mom if she doesn't walk into your room to stare at u, then walk away

when you wanna ask your mom for money you be in her room acting like you care about what she watching on tv like this… pic.twitter.com/Vjbl8sNuRW

When your mum's mate comes round and brings her kid you don't know. pic.twitter.com/3GiTAkOQoI

Am I the only one who's mom find outs everything? Like I could run a stop sign and get a txt from my mom saying "why didn't you stop?????" 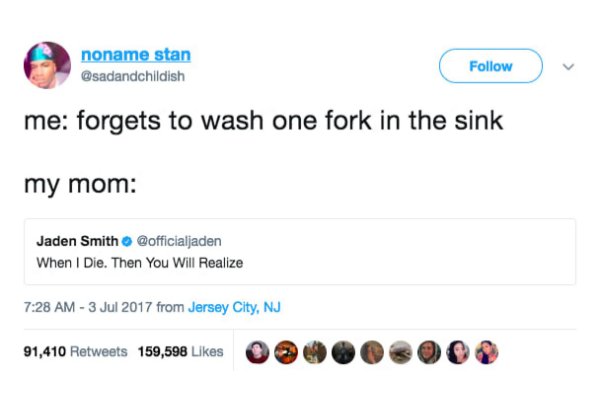 *shows parents a funny meme*
parents: who is that? is that ur friend? do you go to school w/ them? do you love this shit? are you high rn?

when your mom is yelling at your brother and you know you're next pic.twitter.com/gjJnICgZFP