If I had a dollar for every time I had an existential crisis it wouldn't matter because currency is a social construct and life is meaningless.

me too bitch, you aint special pic.twitter.com/7Xu9xKfqM3

feeling depressed? life got you down? it's not you, it's the curse of the old man you ignored on your way through the woods

fuckin life in nursery rhymes was so much simpler. you just wore something or lived in something and that could be your entire deal

i love when ppl are like "ur tattoo is gonna look so stupid when ur 60" like whom amongst us is planning on living until 60. not me bro

When you're so poor in real life that even shadow rendering is set to low pic.twitter.com/fVFwrvtTel

Korean streetwear speaks to me on an emotional level pic.twitter.com/0wzRVWNPBs

Sometimes when I don't know what to do I'll get this out my pocket & pretend it knows the answer. pic.twitter.com/8MIpxHw0hC

life is just one defeat after another pic.twitter.com/EX9suqAXgw

Looking back, it's hard to tell whether Weezer got shittier or my life got better.

I don't understand how people can take long showers. I can only handle six minutes of being naked with my life choices.

me trying find out who's ruining my life pic.twitter.com/3K6UuJWF0U 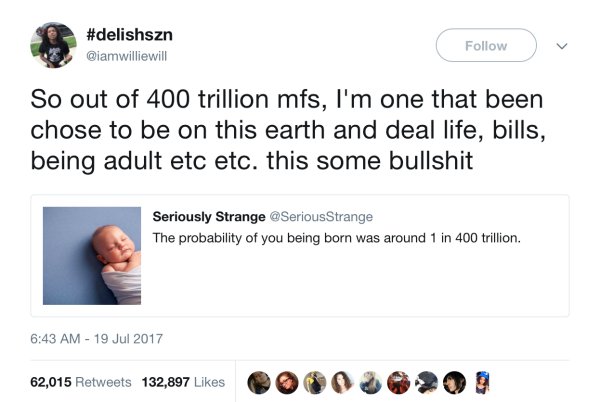