18 Savage British Tweets That Are Way Too Fucking Funny

Picked up my mum steaming and she said "can we get chips" to which I replied "no we have some in the freezer", been waiting years to say that.

scrubbed up Liam Payne looks like the overdressed Finance Assistant who still shouts 'weeeeeeeey' when someone drops a glass in All Bar One pic.twitter.com/FBxsDN3V9H 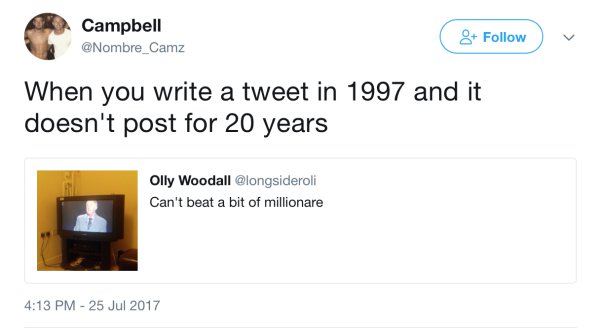 Stay humble.. Brooo u was on itv2 for approx 5 minutes pic.twitter.com/sHm8yYT2Cg

8 year old Eilidh was a fkn psycho, absolute howlin at her cutting out a picture ae cameron n putting it er her face pic.twitter.com/SUZTAmG4ZQ

Thanks grandma, love u x pic.twitter.com/ZTdcgE3usH

"I just can't picture a female doctor!"
It's a fucking TV show mate, they provide the pictures for you

To get my mates down the pub I cut and pasted one pint 5 times and told them there were 5 pints waiting first 5 down gets a free one pic.twitter.com/odD5vnHbnw

How Many Are Lack Access to Electricity?
China Uses 45 Billion Chopsticks Per Year
Largest Gatherings in Human History
Which Country Has the Most Death Penalty Executions?