Literally Just The 18 Best Tweets From Women This Week

I've got 99 problems and they're all luftballoons.

My garbage child is found pic.twitter.com/YkArQ0P8Yz

Send prayers & good wishes for the guy who tried to pick my pocket on the luas, took out a tampon, got mortified & tried to put it back.

What Names are Short For:

My boyfriend just went really quiet for awhile then asked me in a worried tone "…where does a shark's face end?"

I haven't worked out the details but I'm pretty sure we can fix this mess with closed-circuit TV and a replica of the Fox & Friends set. 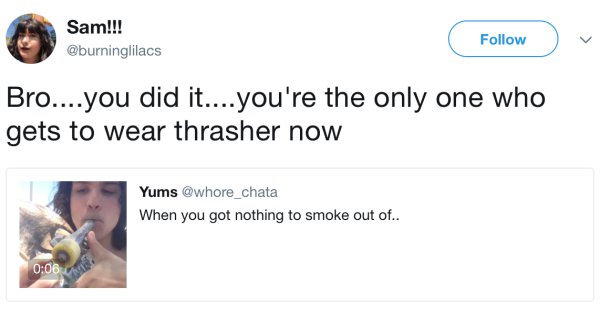 Amelia Earhart is cool shit in this photo and now I too want a red plane and big pants and to die alone in the ocean pic.twitter.com/sPL3DFpM3H