I went to see Guardians of the Galaxy 2 with a group of friends. We had sat down with our buttery popcorn and overpriced drinks and candy, ready to enjoy the movie.

However as we sat down, a group of teens about our age were on their phones, texting and whatnot. This wouldn’t be a problem if they stopped when the movie started, but guess what, they didn’t. 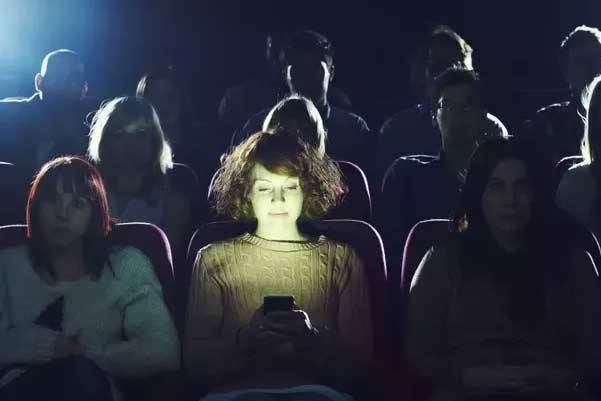 Now it really wasn’t that distracting, and I wouldn’t have as much of a problem with it. But one of them had the audacity to actually call someone. In a hushed whisper, she went blabbering on for about two minutes.

In a movie theatre

During one of the most action-packed movies of all time.

It was incredibly annoying and a manager came by a while after she stopped and gave them a warning.

Who are these kids’ parents?

A girl bashed her boyfriend for watching Christopher Nolan’s Interstellar. Can you imagine?

This happened when I went to watch the highly acclaimed Interstellar. At the same time a (stupid) Hindi movie Happy New Year was released as well.

The movie scenes were gripping and the plot was exhilarating. Then came probably the most visually impressive part in Interstellar. The Tidal waves on Miller’s Planet. Our mouth hung open in great awe of cinematic pleasure which was present right before our eyes.

Right behind my seat, I heard a girl screaming at her friend(probably boyfriend)

What crap are we watching? We should have gone for Happy New Year. It’s useless to talk to you. Arghhh..

I would never be able to forget that experience. I felt pity beyond comparison for the poor guy. Being single has its own perks ;)

So we reached there and got in line to buy the ticket. I looked around and didn’t like the people around me. I mean, they looked ugly and nasty. I just had this feeling that a young lad like me shouldn’t be here.

Anyway… for the sake of experience. I carried on with the plan and entered cinema. Lights out and movie goes on. One thing is for certain, I remember. It wasn’t crowded, vacant seats here and there.

I don’t remember if it was before or after the interval, but I noticed this gentleman right in front of me covered in shawl starts making certain meagre movements whenever there’s action on display for a jiffy.

And to take things up a notch? He raised his hand near his mouth, spit and back to work!

I mumbled in my friend’s ear.

Please tell me this guy isn’t jerking off?

I went in to a shock this time. Who are these people! What’s wrong with them? I mean, I am not against anybody who feels like it but this is a cinema! People sit here to watch movies, have snacks and drinks. Holy cow!

This is not who I am and I found it utterly disgusting, in all seriousness.

No you idiot and I am leaving. Damn you.

I stood up and left the cinema.

While walking down the road, I was thinking of the chair I sat on, must have acceded tons of ejaculations and stains. I actually cursed myself.

This is the type of people I accompany with?

Frankly this practice of being mad at myself kept going on and yet I kept plunging in to even deeper shambles, fucking up my life constantly. What could be more worse than that?

Nobody, I mean nobody is to be blamed here, but me! I chose to waste golden years of my life instead of doing something actually “worth doing”.

What Events Happened on November 18 in History?
I still don’t know who my mother is
How Much Bacteria Does The Human Body Really Contain?
18 Ways Toddlers Wreak Total Havoc On Their Parents’ Lives